“The shortcomings in security at one of the most dangerous places on the planet have embarrassed a lot of people,” the activists’ attorney, Francis Lloyd, told members of the jury according to the BBC. “You’re looking at three scapegoats behind me.” 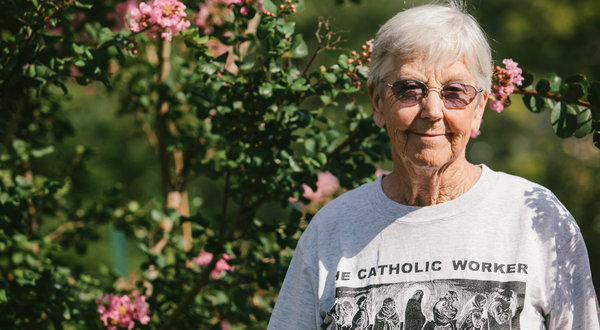 An 83-year-old nun who broke into a Tennessee depleted uranium storage facility in 2012 and splashed human blood on several surfaces, exposing a massive security hole at the nation’s only facility used to store radioactive conventional munitions, was convicted Wednesday and sentenced to a term of up to 20 years in prison.

The only regret Sister Megan Rice shared with members of her jury on Wednesday was that she wished 70 years hadn’t passed before she took direct action, according to the BBC. She and two other peace activists, 64-year-old Michael Walli and 56-year-old Greg Boertje-Obed, were convicted of “invasion of a nuclear facility” in Oak Ridge, Tennessee, even though investigators admitted they did not get close to any actual nuclear material.

The three activists are part of a group called “Transform Now Plowshares,” a reference to the book of Isaiah, which says, “They shall beat their swords into plowshares. They shall learn war no more.” All three face individual sentences of up to 20 years, along with a litany of fines.

As they invaded the Y-12 National Security Complex at Oak Ridge, a perimeter fence was cut, several surfaces were spray-painted, banners were hung and activists read from the Bible. They also spread human blood on several surfaces, saying its use was symbolic, meant to remind people “of the horrific spilling of blood by nuclear weapons.”

“The shortcomings in security at one of the most dangerous places on the planet have embarrassed a lot of people,” the activists’ attorney, Francis Lloyd, told members of the jury according to the BBC. “You’re looking at three scapegoats behind me.”

Sister Rice has been arrested between 40 or 50 times committing acts of civil disobedience, according to The New York Times, including once in Nevada after she physically blocked a truck at a nuclear test site.

Depleted uranium munitions like the kind stored at the facility Sister Rice targeted are blamed for some of the worst birth defects and soaring cancer rates seen in post-war Iraq, particularly in the city of Fallujah following the siege of 2004, in which U.S. soldiers killed thousands of civilians.

The city has never recovered, particularly from the use of depleted uranium munitions, and to this day residents suffer from health effects “worse” than those seen following the nuclear detonations at Hiroshima and Nagasaki, according to a study by the International Journal of Environmental Research and Public Health.

“I believe we are all equally responsible to stop a known crime,” Sister Rice said from the witness stand, according to quotes published by her group. She called herself a “citizen of the world” and reportedly smiled as the verdict was read.

And the real criminals go free.

Guardian of Scotland replied to stormtruther's discussion Are They Burning Dead Bodies In Wuhan, China To Hide The Inadvertent Release Of A Mortal Nerve Toxin? ( I vote plausible)
"How do we know what exactly they are incinerating in China pigs or humans? Why is all of this…"
27 minutes ago

"This kind of shit is already being shoveled into kids TV shows."
1 hour ago

King Of Cups commented on King Of Cups's blog post The Satanic and Masonic Unholy Church of Darwinism and Neo-Darwinism. Brought to you by the Illuminati controlled Royal Society
"The Theory of Evolution and the Big Bang Theory are nothing more than early examples of…"
8 hours ago

King Of Cups commented on King Of Cups's blog post LGBT Movement: One of Cultural Marxism's Trojan Horses
""Leaderless resistance" reminds me of the failed "Occupy Movement" designed to…"
9 hours ago