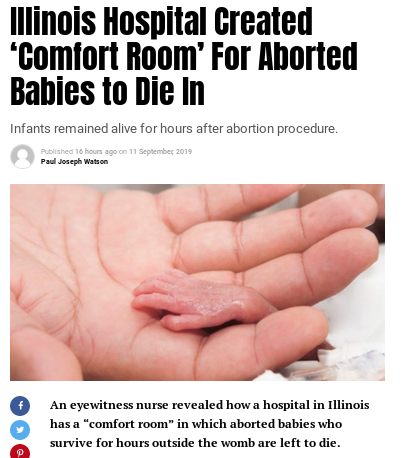 The nurse explainied that while she was working at the hospital, she observed that doctors performed “live birth abortions,” a procedure in which the doctors perform an abortion and allow the baby to die during or after the abortion.

Stanek explained that Christ Hospital offered “comfort care” to babies who were born alive during these abortions, because these babies often survived for at least two hours after they were born. The hospital did not yet respond to a request for comment from the Daily Caller News Foundation.

The demand for socialism is on the rise from young Americans today. But is socialism even morally sound? Find out more now >>

Comfort care, Stanek said, is to wrap the baby in a blanket and keep the baby warm until the baby dies. Parents at Christ Hospital were given the option to hold the baby as well.

“If staff did not have the time or desire to hold the baby, she was taken to Christ Hospital’s Comfort Room, which was complete with a First Photo machine if parents wanted professional pictures of their aborted baby, baptismal supplies, gowns and certificates, foot printing equipment and baby bracelets for mementos, and a rocking chair,” Stanek explained in a testimony previously posted by the Susan B. Anthony List.

“Before the Comfort Room was established, babies were taken to the soiled utility room to die,” Stanek added in her article.

Stanek also told those assembled that she once witnessed a nurse deliver a live baby, cut the umbilical cord but fail to clamp it (causing the baby to begin bleeding), put the baby in a bag and throw the child in the trash.

“One night, a nursing co-worker was taking a baby with Down syndrome who had been aborted alive to our soiled utility room because his parents did not want to hold him, and she did not have time to hold him,” Stanek said. The baby was 21 to 22 weeks old, she said.

The nurse explained that she could not bear the thought of the baby dying alone in the soiled utility room. Stanek held the baby for the last 45 minutes of his life, saying he was too weak to move since any energy he had he was using to breathe.

“Toward the end, he was so quiet I could not tell if he was still alive,” Stanek said. “I held him up to the light to see through his chest wall whether his heart was still beating. After he was pronounced dead, I folded his little arms across his chest, wrapped him in a tiny shroud and carried him to the hospital morgue where all of our dead patients are taken.”

This incident prompted Stanek to end her employment at Christ Hospital.

The religion of satanism inverts all logic and reasoning. It came from inbred/hybrid populations. Unnatural procreation. The abortion industry is an abomination. They tell you it is good and healthy. Ban Ki Moon wants persons "liberated" to be beaten to death and tortured to death under their guise of "freedom of sex workers". Ban Ki Moon wants "liberated" drug addicts to wipe off persons driving down streets with a new born in the vehicle. Their list of downs syndrome mental retardation go on and on. These freaks tell you that their are "safe" zones to brutally poison yourself.

tHESE CREATURES WALK AMONG US JUST LIKE REAL HUMAN BEINGS BUT THEY ARE surely of their father and do his bidding,just makes a normal man want to vomit.

Christ? Hospital... Let the Children come to me.

How nice that one can memorialize their abortion with photos of the child they chose to give no assistance to as it's dying.  How loathsome can it get?

James Roberts commented on Doc Vega's blog post Robot Companion Coming To Your Town Soon
"Doc - That's why there are people like me, who can commit genocide without a second thought.…"
2 hours ago

Chris of the family Masters commented on Doc Vega's blog post An Incredible insight by a German Actor About Jews, their Relationship with Gentiles in Germany and How Hitler rose to power!
"Hey Doc, Any different links? can't open it"
3 hours ago

James Roberts commented on Doc Vega's blog post Robot Companion Coming To Your Town Soon
"steve, - I would consider it an extreme privilege and honor to raise a White child whose father had…"
3 hours ago

Doc Vega commented on Doc Vega's blog post Robot Companion Coming To Your Town Soon
"One final thought. I hope the Feminists eat their hearts out over this as they have indeed brought…"
4 hours ago

King Of Cups left a comment for James Roberts
"Thanks for friending me James. The 7 of Cups a very powerful card, lots of opportunities and…"
6 hours ago

James Roberts commented on Doc Vega's blog post Robot Companion Coming To Your Town Soon
"To round this subject out, an amusing and informative take on the opposition to sex robots by third…"
7 hours ago

James Roberts commented on stormtruther's blog post Numerous reports in the Arab press have accused the US and Israel of being behind the creation and spread of the deadly coronavirus
"I wouldn't have any problem believeing this. Used to read the Tehran Times regularly. I'd…"
7 hours ago

"Things have a way of working themselves out, eventually. Jordan Peterson said in all his years of…"
7 hours ago

"ZOMG! It has come to pass! Shelter in place, everyone!"
7 hours ago

"Banksters are going down, and it's happening everywhere. Hold on to your coupons by keeping…"
8 hours ago