Montreal protesters take march to mayor's doorstep Published on May 28, 2012 by AFP

MONTREAL – Perhaps it was the summer-like weather, or the prospect of a new set of negotiations between the government and student groups on the horizon. http://www.montrealgazette.com/news/Student+protests+weekend+peacef...

Perhaps it had more to do with the festive atmosphere created by the clinking and clanging of thousands of pots and pans that rang out through the city each night, or maybe Montrealers decided they had simply had enough of a handful of violent hooligans besmirching their city’s reputation.

Whatever the reason, the peaceful demonstrations that wound their way through streets across Montreal Island and beyond this weekend were a far cry from the violence and destruction witnessed in recent weeks. Tens of thousands of residents – people of every age, background and political stripe – took to the streets Friday and Saturday to protest both rising tuition fees and the controversial Bill 78 without a single major confrontation with police. Sunday night’s event ended the same way, with police reporting only a single arrest for mischief.

Hundreds of hundreds of conscientious good citizens with justice in their hearts. Lard assed MNS was jealous that THEY was not their object of adoration. THEY will never bring on such a parade ever again if they keep lying all the time.

It looks like more than 10,000 to me.  It appears there are half a million protestors in montreal.

THIS PIC IS FROM MAY 22,2012, Hundreds of thousands in the streets in Quebec yesterday, Day 100 of the strike.

IT IS ABOUT BILL 78 ANTI-PROTEST LAW, AND 5 YEARS OR $5000 FOR WEARING A MASK. THE TRADE UNIONS RECOGNIZE IF THEY OK THIS FOR STUDENTS, IT WILL BE USED AGAINST THEM LATER WHEN THEY ARE ANGRY AND IT'S THEIR TURN TO DEMONSTRATE. BIG MONEY FES...TIVALS ARE WORRIED ABOUT LOOSING MONEY THIS SUMMER IF DEMONSTRATIONS CONTINUE. I HOPE THE WHOLE CITY SLAMS TO A STOP. THE POLITICINAS ARE IN BED WITH THE MAFIA AND KNIGHTS OF COLUMBUS/MALTA, THE SYSTEM IS BEING TURNED ON US. EVEN REAL JOURNALISTS ARE BEING HARRASSED AND THREATENED IF THEY KEEP EXPOSING ALL THE CORRUPTION AND OUR MEDIA IS BEING USED TO DEMONIZE THE PUBLIC! ALL DAY TODAY THE MEDIA CRY FOR THE SYSTEM AND CALL EVERYONE HERE A CRIMINAL, REPEATING IT'S "JUST STUDENTS" YOU SEE HERE. FULL OUTRIGHT LIE. THIS IS A QUARTER MILLIONS "EVERYONES"! 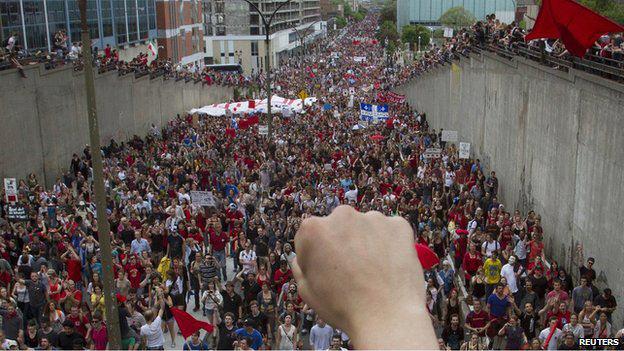 looks like  a lot..  more than all my fingers and toes can count..

TRY HUNDREDS OF THOUSANDS. DON'T BELEIVE ANYTHING THE MEDIA REPORTS. LAST WEEK'S WAS 250 000, BUT MEDIA ATTEMPTED TO SAY 100 000. QUARTER OF A MILLION PEOPLE DEMONSTRATING AGAINST THE NAZI LAW AND NOTHING ELSE. THE CASSEROLE DEMONSTRATION IS GOING FINE AS WELL. NOTHING BETTER THAN SITTING ON YOUR FRONT PORCH BETWEEN 8 AND 9 AT NIGHT BANGING ON A POT. LET'S SEE THEM MAKE A LAW AND COME TO EACH AND EVERY HOME TO STOP US! COLLECTING DOWNTOWN MAKES IT EASY FOR THEM, DOING IT FROM HOME MAKES IT IMPOSSIBLE FOR THEM TO HANDLE! THANKS FOR SPREADING IT BROTHER JAMES.

Must be a catholic family.

It looks like more than a few hundred people to me too. LOL

I'm happy that no one got out of line. Maybe the media there should hire someone who can count more accurately.

James Roberts commented on steve's blog post WARNING--- NOT FOR THE SQUEMISH-- Food from HELL, Quisine from the third world savages they are flooding our country with
"Nigerian cuisine (coming to a neighborhood near us?) -"
54 minutes ago

"They're introducing a new bill to only allow tofu bullets, unless you're a rich…"
1 hour ago

James Roberts commented on steve's blog post It's not just O K to be WHITE it's GREEEEEEEEATTTTTTTTTTTT
"They're Grrrreat!"
1 hour ago

"To use a MGTOW-ish acronym, NAWALT (Not All Women Are Like That). Not like the woman in the image,…"
1 hour ago

"Press as trustworthy as ever."
3 hours ago

"Blast from the past?"
3 hours ago