The 2nd week of August has been brutal to CNN.

CNN, who has been extremely unfair to Donald Trump since his convention, is now doing worse than the HGN in ratings, an all time low…

If Hillary can make $13 billion aid for Haiti disappear, how much money do you think she can make disappear when becoming the President of United States?

The Cascade Mall shooting suspect, Arcan Cetin, may face an additional investigation related to his voting record and citizenship status.

Federal sources confirm to KING 5 that Cetin was not a U.S. citizen, meaning legally he cannot vote. However, state records show Cetin registered to vote in 2014 and participated in three election cycles, including the May presidential… Continue

How America Was Compromised From Within Part I 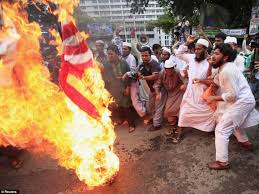 Step By Step Lesson on How the Left Brought Down America

The story of how liberal, progressive, leftist, or shall we say Communist insurgency destroyed the greatest nation on the face of the earth is a tragic one, and if history is allowed to be written factually it…

After F*** you EU! Philippines President now calls for ALLIANCE with Russia and China

'How is this not classified?' Obama used a code name to talk with Hillary on her personal email, as new FBI records reveal that even her top aide Huma was shocked by unsecure messages

Huma Abedin told FBI the White House was informed when Clinton changed her primary email address
White House server could only receive emails from designated accounts
FBI showed Abedin an exchange between Clinton and an account she did not recognize, believed to belong to Obama
June 2012 email was titled 'Re: Congratulations' and took place on day Supreme Court upheld part of Obamacare
Abedin said she was shocked the email was not classified
Obama told CBS in March 2014… Continue

"You know what? Then you ensure the addict, addiction is a disease, it's a medical condition," Ventura said. "We choose to treat it criminally rather than medically.

From A CENTURY OF DISHONOR. Helen Hunt Jackson, first published in 1881

This letter was written to Colonel T. G. C. Lee, U.S.A., by Lieut. Royal E. Whitman, 3d U.S. Cavalry. It is published in the Report of the Board of Indian Commissioners for 1871.

"DEAR COLONEL, Thanks for your kind letter of last week. If I could see you and have a long talk, and answer…

“Pussy-fication”: Toy Gun from 1960’s Would be Banned Today

When a White House staff member protested to a Chinese security official that this was not normal protocol, the official shouted, “This is our country.”…

CDC Proves It's Guilt And Corruption

ALERT U.S. CDC Giving Itself Unconstitutional POWERS to Round Up and Detain Citizens En Masse Anytime, Anywhere And Throw Away the Key

Mr. Sizzle commented on steve's blog post No cookies for colored santa and no this ain't no "ONION" article
"I feel sorry for the EMT that had to provide medical assistance to that thing.  He’s…"
10 hours ago

Mr. Sizzle favorited steve's blog post No cookies for colored santa and no this ain't no "ONION" article
10 hours ago

Mr. Sizzle left a comment for stormtruther
10 hours ago

"Hundreds? After an incessant international media campaign? Wow!"
10 hours ago

Greta Thunberg told world leaders on Friday that they "haven't seen the last" of climate activists , as she marched with hundreds of people in the western Sw...
12 hours ago
2 Comments 1 Favorite