Media Whoop Up Stampede To Cold War, Hot War, Whatever

Turkey and NATO behind attacks on Christians in Armenia

Armenians Wake Up to the Truth: Turkey and NATO Behind Ethnic Cleansing in Lattakia and Kessab

Palestine, Israel and the U.S. Empire

Palestine, Israel and the U.S. Empire provides a sharp analysis of historic and current events in the struggle for Palestine—from the division of the Middle East by Western powers and the Zionist settler movement, to the founding of Israel and its regional role as a watchdog for U.S. interests, to present-day conflicts and the prospects for a just resolution.

In the early morning hours of May 31, 2010, Israeli naval forces carried out a raid and attack on a Gaza aid…

Iraq War veteran Mike Prysner speaks out against the war

March 19 marked the 11th anniversary of the U.S. invasion of Iraq, a brutal act of aggression that will be remembered as one of history's worst crimes. In this video, Iraq War veteran and anti-war organizer Mike Prysner, co-founder of March Forward!, testifies at the 2008 Winter Soldier hearing about how the military brass promotes racism to justify a war, which in…

It has been revealed that NATO has been planning a false flag attack against Turkey to justify the Turkish invasion of northern Syria, the International Business Times…

11 Symptoms of Final Decay of Civilization 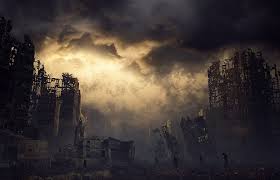 In 1947, sociologist Dr. Carle Zimmerman wrote a text called “Family and Civilization.” He identified eleven ‘symptoms of final decay’ observable in the fall of both the Greek and Roman civilizations. See how many characterize our society:

“Ruined! Ruined! My time has clean run out! The clock has stopped, the pygmy house has crumbled. Soon I shall embrace eternity to my breast, and soon I shall howl gigantic curses at mankind…If there is a Something which devours, I’ll leap within it, though I bring the world to ruins—the…

(7 January, 2014) -In a famous speech to the US Congress in March 1991, just after the collapse of the Soviet Union and the US Gulf War victory over Saddam Hussein’s Iraq, a triumphant US President George H.W. Bush proclaimed the dawn of a “New World Order.”… IF YOU ARE THE KIND OF GARDENER who buys vegetable seeds or seedlings (including tomato plants) from a local garden center, as I sometimes do, beware the varieties you select. Otherwise, you could very…

TIME WE GET THIS "OFTEN HIJACKED" SYMBOL RIGHT FOR A CHANGE

No Difference? Carry a Scorpion in Your Pocket in Place of Car Keys

The Tavistock Institute of Human Relations

The authoritative expose of the greatest brainwashing organization to ever exist in the course of human history is now revealed in Dr. John Coleman's latest book, The Tavistock Institute of Human Relations: Shaping the Moral,…

Byrd was born in Detroit, Texas, on April 24, 1900. He studied geology at the University of Texas (1917-19) and during his holidays worked on an oil rig in Santa Anna.

After leaving university he worked for H. E. Humphreys. He joined Old Dominion Oil Company of San Antonio in 1924 but the following year he became a freelance geological consultant. During this time…

The internet, GPS, voice recognition programs like Siri – many of the technologies that we use today were developed with national security in mind. These inv...
30 minutes ago
0 Comments 0 Favorites