The brother of Hamid Karzai, the Afghan president, has been receiving regular payments from the US Central Intelligence Agency (CIA), The New York Times has reported.

The newspaper, quoting current and former US officials, said on Wednesday that Ahmed Wali Karzai, a suspected participant in Afghanistan's booming illegal opium trade, has taken payments for much of the past eight years that the US has been in the country.

It said Karzai gets paid for a variety of services… Continue

I just came back with the fam's from a trip to the Upper Peninsula of MI and even though it rained everyday, a good time was had by all! It was nice to hide out in the woods for awhile and be in the comfort of family and friends. Unfortunately, the trip had a few question marks lingering and things that make you go hmmmm along the way!

One thing that was a little askew about this particular trip to the U.P. was all the school closings going on over fear of the spread of the Swine… Continue

"Unspeakable horror, they knew this is the effects of DU and they calculatedly chose to use it en masse all over the country. DU has a radioactive half-life of over 3.5 billion years. Arrest these god damn criminals."

The United States is headed the way of Rome and the Soviet Union, for the same reasons, unless we reverse the trend-Ron Paul

With a faltering economy, multiple wars, and the approaching demise of the dollar’s reserve status, there are more than enough problems to keep politicians in Washington working day and night. In between handing out cash for clunkers and nationalizing healthcare, the administration is busy sending more troops overseas, escalating existing wars, and seeking out excuses to start new wars. Congress is working on “urgent” legislation to address crises like healthcare reform… Continue

Depending on your perspective, the Oath Keepers are either strident defenders of liberty or dangerous peddlers of paranoia.

In the age of town halls, talk radio and tea parties, middle ground of opinion is hard to find.

Launched in March by Las Vegan Stewart Rhodes, Oath Keepers bills itself as a nonpartisan group of current and retired law enforcement and military personnel who vow to fulfill their oaths to the… Continue

“This is so cool! This is so cool!” a thirteen-year-old boy repeated as he squeezed rounds from a real M-16, picking off “enemy combatants” in a video game while perched atop a real Army Humvee. “I just came to the mall to skateboard but everyone said this was pretty cool. I just had to try it and it's great!”
The person reporting on this youthful enthusiasm was Pat Elder, who serves on the Steering Committee of the National Network Opposing… Continue

US embassy found involved in importing weapons to Pakistan

ISLAMABAD: The US embassy has been found involved in importing sophisticated weapons to Pakistan without the permission and knowledge of the authorities here.
The Foreign Office and the Commerce Ministry denied having authorised the US or any other foreign mission to import huge quantity of weapons. However, the fact remains that the US embassy in Islamabad has brought to Pakistan at least two consignments of modern weapons during this year.

The Foreign Office, which is the main… Continue

Right to bear arms, Support for banning handguns continues to fall in America

DESPITE electing an unusually liberal president, on at least one measure Americans are more conservative than at any time before. Public support for a ban on handguns has fallen to 28%, the lowest level in nearly 50 years, according to a new poll from Gallup. When Americans were first asked the question in 1959, 60% were in favour of introducing a law to ban handguns, but support has declined steadily. Enthusiasm for stricter laws relating to the sale of firearms is also ebbing, falling from… Continue

Wow, even the cartoons of the Great Depression could apply to today’s America

Check out this cartoon from 1934 in the Chicago Tribune. This could be put in any paper today and still be relevant.… 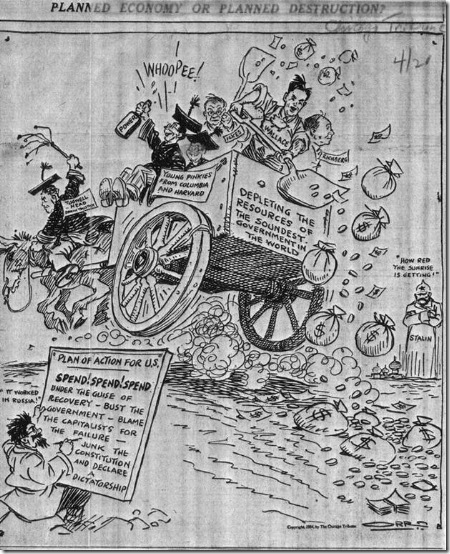 Our view is that the elitists are currently buying time for the dollar, and stalling the rally in precious metals, by weakening other currencies until they are ready for the big stock takedown/correction. This process of supporting the dollar is becoming extremely expensive and difficult, so they had to take the Dow down 200 points on Thursday to start some stock contagion in Asia and Europe to flush some money into dollars and treasuries.

The FTSE, Nikkei and Hang Seng were all down… Continue

Thanks to Stephanie Gaskell, New York Daily News Staff writer, we read of the above’s shocking news, which New York City and the US governments seemingly refuse to let sink into their thick heads and even thicker skin. Thousands of first responders are in dire health conditions, and consequently dire financial and familial conditions, due to illnesses contracted while working at…

Today, the director of the Congressional Budget Office warned the Senate Energy and Natural Resources Committee that proposed climate change legislation would impose "significant costs" on America's GDP and employment. That’s not exactly what proponents had promised.


According to CBO chief Douglas Elmendorf, the Waxman-Markey bill passed in the House last June would reduce GDP by between one and three quarters of a percent by 2020, and between 1 and… Continue

The Founders’ Antipathy to Militarism

The Third Amendment to the U.S. Constitution provides that “no Soldier shall, in time of peace be quartered in any house, without the consent of the Owner, nor in time of war, but in a manner to be prescribed by law.”

Obviously, the Third Amendment has little relevance today. But what is relevant for us today is the mindset that underlay the passage of that amendment – a mindset of deep antipathy toward militarism and… Continue

Backdoor Escalation, Obama is smooth-talking his way into the Afghan quagmire

The official explanation for Obama’s Nobel Peace Prize is that the Norwegians are using the Nobel as an incentive for the president to fulfill what many see as his bright promise and a kind of prophylactic against a repeat of Bush-era warmongering. After all, how could a recipient of the Peace Prize engage in the kind of brazen militarism that has characterized U.S. foreign policy in the post-9/11 era?

Easy – do it on the… Continue

UNMASK THE FED, It's time for America to know who's minding the store

Last week, Congressmen Ron Paul and Alan Grayson sent an open letter to the Senate Banking Committee about the Chairman of the Federal Reserve, Ben Bernanke. I agree with their sentiments that, before he is reconfirmed for a second term, the Senate should know who got the $2 trillion the Federal Reserve has lent out over the last two years. Only then will the Senate be able to judge… Continue

"Here's the remedy. There is a contract between you and a bank to safeguard your money. Under…"
12 minutes ago