AP story from 2004: Kenyan-born Obama all set for US Senate‏

Kenyan-born US Senate hopeful, Barrack Obama, appeared set to take over the Illinois Senate seat after his main rival, Jack Ryan, dropped out of the race on Friday night amid a furor over lurid sex club allegations.

The allegations that horrified fellow Republicans and caused his once-promising candidacy to implode in four short days have given Obama a clear lead as Republicans struggled to fetch an alternative. 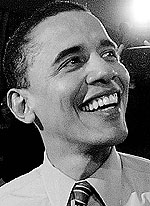 Ryan’s campaign began to crumble on Monday following the release of embarrassing records from his divorce. In the records, his ex-wife, Boston Public actress Jeri Ryan, said her former husband took her to kinky sex clubs in Paris, New York and New Orleans.

"It’s clear to me that a vigorous debate on the issues most likely could not take place if I remain in the race," Ryan, 44, said in a statement. "What would take place, rather, is a brutal, scorched-earth campaign – the kind of campaign that has turned off so many voters, the kind of politics I refuse to play."

Although Ryan disputed the allegations, saying he and his wife went to one ‘avant-garde’ club in Paris and left because they felt uncomfortable, lashed out at the media and said it was "truly outrageous" that the Chicago Tribune got a judge to unseal the records.

The Republican choice will become an instant underdog in the campaign for the seat of retiring Republican Senator Peter Fitzgerald, since Obama held a wide lead even before the scandal broke.

"I feel for him actually," Obama told a Chicago TV station. "What he’s gone through over the last three days I think is something you wouldn’t wish on anybody."

The Republican state committee must now choose a replacement for Ryan, who had won in the primaries against seven contenders. Its task is complicated by the fact that Obama holds a comfortable lead in the polls and is widely regarded as a rising Democratic star.

The chairwoman of the Illinois Republican Party, Judy Topinka, said at a news conference, after Ryan withdrew, that Republicans would probably take several weeks to settle on a new candidate.

"Obviously, this is a bad week for our party and our state," she said.

Comment by Tara on October 15, 2009 at 12:01pm
Good find Luggz, hmmmmm...... looks like the stage of deception was already set for him in his senatorial bid for Congress! Barry Soetero is a liar!

steve commented on Keisha Ruan's blog post In Case You Missed It
"They all have THEIR PARTS/ROLES TO PLAY in the Selection charade. If voting really mattered it…"
33 minutes ago

Today, right now at a Trump rally in Michigan Trump played a video to downplay his actions in…See More
39 minutes ago
1 Comment 0 Favorites

"This is as big a hoax as the voting Selection coming, Put a bounty on these fkn INVADERS ,a year…"
47 minutes ago

"WoW, I figured mighta went off the chain w/ the weirdness... So here's even better examples of…"
1 hour ago

cheeki kea commented on Chris of the family Masters's blog post Macron CRACKS DOWN on Islam in France in a MASSIVE TURN to the Nationalist Populist Right!!!
"Could to too little too late. He was all for living with terrorism at one point. He let the evil…"
7 hours ago

cheeki kea left a comment for Lucie
"Greetings Lucie, great to see you come to the site."
8 hours ago

October 28, 2020"It's not just air travel that the Rockefeller Foundation and the World Economic…See More
10 hours ago
0 Comments 1 Favorite

Chris of the family Masters left a comment for Lucie
"Welcome Lucie!"
10 hours ago