Defining The Tyranny On Capitol Hill 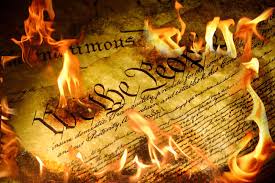 When The Federal Government Becomes The Enemy

With the appointment of Paul Ryan as Speaker of The House of Representatives many conservatives were concerned that he would basically follow the same path of capitulation as his predecessor, John Boehner. They were right! This week the Ryan Omnibus Bill was passed with not only support from the Democrats, but with little opposition from the GOP. The bill included funding for Planned Parenthood, Executive Amnesty, Syrian Refugee Placement, continuing Obamacare, and a number of other destructive laws that demonstrate a total disregard for the will of the people.

When Mitch McConnell and John Boehner ran for office during the last election they campaigned on defunding Obamacare and derailing many of the measures that have infuriated the conservative base of the GOP and independent voters as well. The lies during the election process, the legislation that further pushes the US dollar into devaluation as deficits increase, and the sheer denial of will of their constituents, but the kind of ambivalence to the voters that our founding fathers would have found reprehensible. We no longer have a representative from of government. We had at least 90 card carrying Communists in Congress in 2009. Communism is a  political ideology that is completely diametrically opposed to our form of government and should be outlawed, yet in the current era it is accepted.

With the Democratic Party having been usurped by socialism as well as an uncanny predilection toward an inherent lack of the promised transparency that was promised by President Obama when he was inaugurated  the party once under the leadership of such patriots as John Kennedy, Patrick Moynihan, and Joe Lieberman has been eclipsed by those hostile to the US Constitution. The Republican Party is now an illusion of opposition and conservative activism. Instead GOP leaders talk tough and cave in like an old silver mine when it comes down to the vote on issues that threaten the very fabric of American society. Concerns for economic stability or national security seem the last thing on the minds of these charlatans that we have elected to protect and defend the US Constitution as well as the people of our nation!

Is it that our officials are really that unaware of the plight of the American people as they sit in their ivory towers on Capitol Hill? Have our members of Congress simply adopted a mindset of complete disregard for the safety and future of the citizens of the United States? Are they simply lining their pockets with kickbacks from their corporate lobbyists as they cut deals that undermine this country? Or, are their darker implications even more disturbing? Could it be that the NSA has been used a political weapon to blackmail our Senators and Congressman into submission?

As President Obama returns triumphantly from the Paris Climate Talks with a nonenforceable agreement other G-20 nations to reduce carbon emissions even further with the global UN alliances while countries like China and India, the biggest polluters, are allowed to continue building the very coal fired plants for their infrastructure that we are destroying here with punitive EPA regulations, it seems the writing is on the wall. When America is directed against any legal provision of its Constitution to confiscate tax funds from its citizens to contribute money for climate change relief to third world countries another agenda seems to be emerging. When America is asked to take on thousands of refugees from war torn Iraq and Syria with terrorist factions hiding within their ranks while financing their placement on our soil as well without the consent of the governed (we the people of the USA) we are no longer being represented we are being ruled!

Rulers are characterized through out history as dictators, monarchs, and fascists! This is not what our forefathers intended for future generations of Americans nor is the current government a Constitutional entity. The law breaking that has occurred has been appalling! With Hillary Clinton and Ashton Carter being allowed to expose their official correspondence to hackers violating classified protocol is a criminally liable. The successful hacking of the OPM by China and Pentagon by Russia demonstrates the utter lack of concern for the cyber security of our government as well as national security. It appears, we the American people, are being sold out lock stock and barrel, and again the question arises for who and for what?

Perhaps our government has sabotaged itself and we the people for a purpose not so readily apparent. That purpose being the destruction of our individual sovereignty. What purpose could this act of treason possibly serve, you ask? It would seem to lead to the ultimate motive of delivering our country into the hands of a world government where all levels of internal jurisdiction from city, to county, to state, to the fed are dissolved and our own heritage as an individual nation is torn asunder under the rule of a global elite organization that will ruthlessly use war and terrorism with Machiavellian cunning and stealth to convince or coerce the people of the nations to submit. Many whistle blowers and evangelical experts are pointing to the culmination of events leading to a final countdown of draconian laws designed through lies like Climate Change and Agenda 21 to develop international enforcement to subjugate the people of the world under the aegis of knowing better than we do what's best for us.

However, knowing better than we do what is best for us will lead to a draconian form of control over our lives dictating the quality of existence, the rationing of resources, and constraints upon our lifestyles that will forever change the way we live under the weight of pseudoscience and big government forever regulating and taxing us into slavery. It's already happening! This is no paranoid delusion or survivalist's wet dream. Under President Obama, America has been forcibly moved further under the hand of an United Nations International rule in direct opposition to our US Constitution. The president who supposedly fancied himself as some junior professor on the US Constitution has only repeatedly violated it rather than uphold and defend it. Even Ruth Bader Ginsburgh, a senior Supreme Court Justice, said on Egyptian TV that she did not support the Constitution. As Sharia Law is advocated more and more by factions within the US court system the evidence is clear.

Yuri Bezmenov, a former KGB agent made it quite clear that after his defection to Canada in the 1980's that his disenfranchisement with Communism was based upon the ultimate betrayal by the system once its agenda has been met. The liquidation of all the useful idiots, the appointees, the disinformation specialists, the zealots who had been ideologically converted to the cause of Communism, who carried the torch for the insurrections that destabilized a society are ultimately sacrificed as they will become the worst enemies of the new rulers once they find they have been lied to! In America we are at that short end of the fuse rapidly burning on its way to ignite the bomb that causes America to self destruct under the weight of the sheep, the apathetic, and the outsmarted supporters foolish enough to embrace the doctrine that leads them to the slaughter. All because they never realized that their very own government was not just merely inept. It became their enemy!

"I urge all parents to teach daughters ( and sons ) marital arts A.S.A.P There is No Time To Wait.…"
59 seconds ago

"The silver impregnated muslin gauze is known by the trade name of Silverlon. It may require a…"
1 hour ago

Astronomy 105: Weather and Our Atmosphere The Astronomy 105 class taught by Heath Hatch of the Physics department launched a weather balloon into the atmosph...
10 hours ago
0 Comments 0 Favorites