I love nonsense like this, and the similarly false "scientific" point of view that the first Britons were black, and the idea that the origin of man kind started in Africa, and spread out from there all over the world. Typical for the left, they don't think things through. These all imply that the dark-skinned races are primitive, and that modern Whites evolved from primitive blacks. LOL! No word much in the news media or academe about the red-headed mummies in China, which imply that the Chinese didn't even invent the wheel on their own, as these mummies were found with wagon wheels, among other things. We do know that Whites invented the light bulb, the internal combustion engine, the radio, telephone, telegraph, AC and DC motors and generators, oil refining, rockets to outer space, the magnifying glass, the microscope, the telescope, the transistor, crop rotation, the flush toilet, batteries, the LED, fluorescent lights, the automobile, the steam engine, the engine lathe and milling machine, the airplane, the train, the television, the computer, ground glass lenses for vision correction, plastics, the Bessemer steel process, the printing press, the X-ray, the neon tube, antibiotics, and on and on and on. They also wrote the Magna Carta and the Bill of Rights. If it weren't for Whites, the world would still be stuck in the early Iron age, with no such thing as a liberal democracy for a system of government. 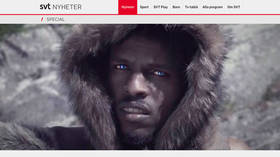 An ad for an upcoming documentary about ‘The First Swedes,’ who were dark-skinned and blue eyed, has prompted fear and denial on Twitter.

The series will start to air on Swedish television this Wednesday, and when channel SVT began promoting it last week, some people reacted on social media with disbelief and anger.

The documentary will look at DNA technology which has revealed more about how Sweden was populated after the Ice Age and detailing how the first pioneers in the country were dark-skinned with blue eyes and came from the south.

Another population of people who had paler skin and a variety of eye and hair colors arrived around the same time from the east. The two peoples are thought to have mixed fairly quickly, and Nordic people eventually became lighter skinned, allowing them to increase their vitamin D production to survive in the dark winters.

Some Twitter users took the information advertised in the documentary as some sort of conspiracy aimed at making people more open to immigration. “Indoctrination continues,” one said.

(more at link, for laughs)