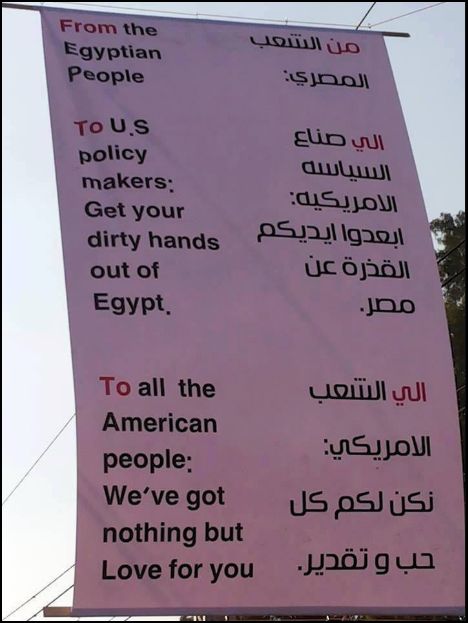 EGYPTS MESSAGE TO THE AMERICAN PEOPLE!!! and it's policymakers

Eslam: The important photo is from the demonstrations around USA embassy, all people there of course are shouting against Obama and Mrs. Patterson, but in the same time they sending a different message to American people, please Margaret try to post this photo to make American people know and understand how Egyptians are friendly and civilized people and know well what is difference between people and politicians leaders. 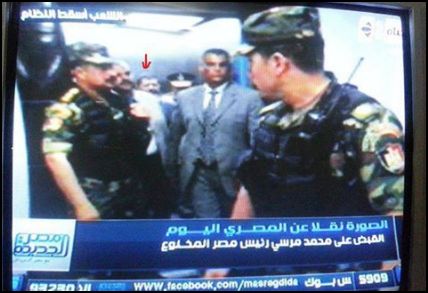 Eslam says : only photo to Moursy while army officers arresting him. what written in the screen ( arrested ousted President Mohamed Morsy )

Eslam says : After the waning time had end, the military statement made Moursy to step down, suspends the constitution, puts the head of constitutional court to take over Egypt presidency by order from the army., there are a millions of Egyptians who celebrates in the streets. Egypt explodes in cheer Margaret, fireworks make the night looks as a day
Moursy now and all muslims brotherhood are under house arrest This is the head of the constitutional court, the new president of Egypt, Mr. Adly Mansour

of course, Moursy tried to make him leave the constitutional court many time, but he couldn't.

Margaret says: huge Thank you to the Egyptian Army for ousting the criminals...and protecting Egyptian people from the enemy within...Nice job taking over the TV too, very important!  Kudos to Egypt's Army!! No Justice No Peace! You can't imagine how people feel here,the celebrations are everywhere! Army soldiers and police also gives sweets to people! Every one here hold a flag in hands and dance like crazy! It's historical moments!!! 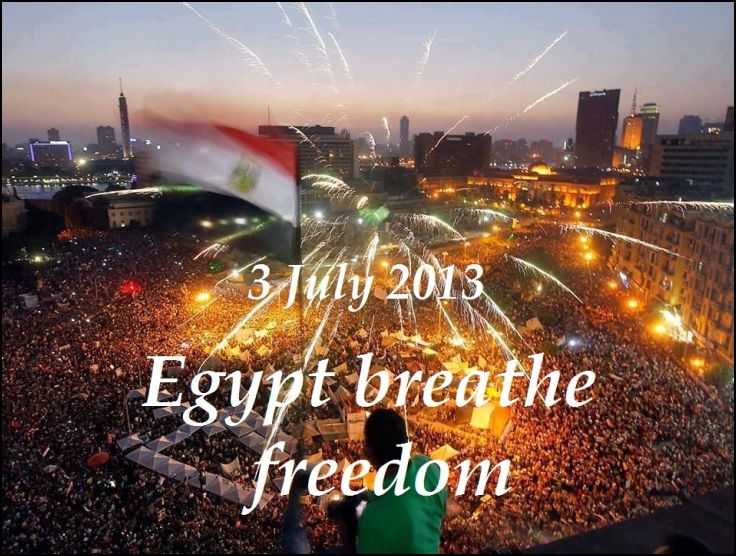 Previous days in Egypt that led up to this event... lots of photos and videos...in the links below

This is  honestly the happiest post I have ever posted since joining the truth movement....I honestly hope other countries follow the Egyptians in Ousting criminals from Leadership. There is nothing divided about the Egyptian People They are United against Evil! Congratulations Egyptians! Peace and Love to ALL OF YOU!!!!

Thanks, Margaret. What a great post for July 4th!

"It is rumored the F B I had this info for more than 2 yrs. It's like a competition to BETRAY…"
10 hours ago

"Hey All, I suggest reading "Zen and the art of motorcycle maintenance", one of the few…"
10 hours ago

"...great timing in resurrecting your "Lock her up" campaign there Donny??? Wanna make a…"
10 hours ago

Central Scrutinizer favorited Phyllis Maka's blog post HOW TO WIN BY A LANDSLIDE. THAT'S HOW ARDERN'S RESULTS WAS DESCRIBED -- A LANDSLIDE -- SHE WAS NOT POPULAR!
11 hours ago

Central Scrutinizer commented on Phyllis Maka's blog post HOW TO WIN BY A LANDSLIDE. THAT'S HOW ARDERN'S RESULTS WAS DESCRIBED -- A LANDSLIDE -- SHE WAS NOT POPULAR!
"what's the source here?? any article not authored by the original poster culled from another…"
11 hours ago