Fox News:  EU to meet soon to discuss Iran and the International Community

TORONTO (AP) — Canada's Conservative government said Friday it is shutting its embassy in Tehran and severing diplomatic relations with Iran, which Canada says is providing military assistance to Syria.

Foreign Affairs Minister John Baird said that the Canadian embassy in Tehran will close immediately and Iranian diplomats in Canada have been given five days to leave.

Baird, who serves in a government that is a staunch ally of Israel, said Iran is the most significant threat to global peace and security in the world today.

"The Iranian regime is providing increasing military assistance to the Assad regime; it refuses to comply with UN resolutions pertaining to its nuclear program; it routinely threatens the existence of Israel and engages in racist anti-Semitic rhetoric and incitement to genocide," Baird said in a statement.

"It is among the world's worst violators of human rights; and it shelters and materially supports terrorist groups, requiring the Government of Canada to formally list Iran as a state sponsor of terrorism under the Justice for Victims of Terrorism Act."

Baird said he was worried about the safety of diplomats in Tehran following attacks on the British embassy there.

Britain downgraded ties with Iran following a major attack on its embassy in Tehran in November 2011, which it insists was sanctioned by the Islamic republic's ruling elite. After the attack, Britain pulled all of its diplomats out of Iran and expelled Iranian diplomats from U.K. soil.

Canada's relations with Iran have been strained since former Canadian ambassador Ken Taylor helped rescue six Americans from Iran during the hostage crisis in 1980.

Relations became even rockier in 2003 after Zahra Kazemi, a freelance photographer with dual Canadian-Iranian citizenship, died in custody after being arrested while taking photographs outside a Tehran prison in 2003. Canada then recalled its ambassador. Iran also ordered Canada's ambassador to leave the country after trying unsuccessfully to come to an agreement on an exchange of ambassadors for some time.

All Iranian diplomats in Canada have now been declared "personae non gratae," Baird said. He also told Canadians to avoid traveling to Iran.

OTTAWA - Canada has closed its embassy in Iran and will expel all remaining Iranian diplomats in Canada within five days, Foreign Minister John Baird said on Friday, denouncing Tehran as the biggest threat to global security.

Baird cited Iran's nuclear program, its hostility towards Israel and Iranian military assistance to the government of President Bashar Assad Syria, which is locked in civil war with rebels.

"Canada views the government of Iran as the most significant threat to global peace and security in the world today," Baird said in a statement, accusing Iran of showing blatant disregard for the safety of foreign diplomats.

"Under the circumstances, Canada can no longer maintain a diplomatic presence in Iran ... Diplomatic relations between Canada and Iran have been suspended," he said.

Prime Minister Binyamin Netanyahu on Friday  welcomed Canada's decision to expel the Iranian ambassador from Ottawa and to close the Canadian embassy in Tehran.

"I congratulate Canada's PM [Stephen] Harper for showing leadership and making a bold move that sends a clear message to Iran and the world," Netanyahu stated. 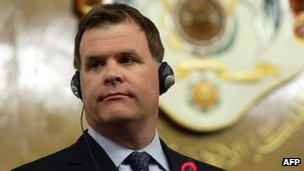 Canada is closing its embassy in Iran and expelling the remaining Iranian diplomats in Canada, Foreign Minister John Baird has said in a statement.

The Canadian government cited Iran's support for Syrian President Bashar al-Assad and failure to comply with UN inspectors as the reason for the move.

Iranian diplomats have been given five days to leave Canada.

Ramin Mehmanparast, from the country's foreign affairs agency, added that the Canadian government had "a long record of animosity" towards Iran.

Mr Baird's statement on Friday said that Canada viewed Iran "as the most significant threat to global peace and security in the world today".

European Union foreign ministers meeting in Cyprus say stronger sanctions against Iran coming as soon as next week due to Islamic Republic's lack of "a constructive will" for substantial talks on nuclear program.

"Sanctions are necessary and soon. I can't see there is really a constructive will on the Iranian side for substantial talks," Westerwelle told Reuters on the sidelines of a meeting of EU foreign ministers in Cyprus.

"If they will not come back to the table, then probably the next round is necessary. This is not something for next year, we are talking about next weeks," he said. He called the outcome of this year's three rounds of negotiations between world powers and Iran "disappointing".

When European Union foreign ministers meet today in Cyprus, their most consequential discussion may well be on efforts to increase the pressure on Iran over its nuclear program.

With nuclear talks essentially having gone nowhere for months – and no prospect of fresh top-level negotiations – in the offing, diplomats say a group of member states will push for new sanctions on Iran which would be ready in a month’s time.

“There have been talks about new sanctions already, not among the 27 (member states) but in smaller circles,” said one diplomat. He said Friday’s EU-wide talks would not get into specifics but would ask member states to back the idea of a new round of sanctions.

“As there has been no progress in the talks with Iran it is necessary to continue with the pressure against Iran. So we think that new sanctions will be necessary,” the person said.

Foreign ministers will discuss Iran Friday afternoon. The other major topic for the two-day informal summit – the civil war in Syria – is set to be discussed on Saturday.

Some countries have been open about their plans.

Earlier this week, U.K. Foreign Secretary William Hague told British lawmakers Iran is losing $8 billion in revenue a quarter because of the EU’s oil import embargo and said Europe would “continue to intensify that pressure of sanctions as well as remain open to negotiations in order to try to resolve this issue.”

Diplomats say Mr. Hague is expected to reiterate that message in Cyprus and that specific ideas – including fresh sanctions on Iran’s financial sector and restrictions on its energy industry – are being crafted.

"Excellent news. Here there was due be a protest (5G) in the city but people got warned off by the…"
6 minutes ago

cheeki kea commented on James Roberts's blog post Israel Trains American Police to be Brutal
"No wonder the cops have lost the plot and are hated. "
39 minutes ago

"I'm sticking to the Old Normal thanks. "
47 minutes ago

cheeki kea commented on James Roberts's blog post The Rioting is Being Staged - Even Minnesota's Governor Agrees, Says International Forces at Work
"Must be a leftie State with a leftie governor, then it would all make sense. "
1 hour ago

"Workers Please read the collective employment contract if you have one, you may be pleasantly…"
1 hour ago

With the convergence of Artificial Intelligence, Bio-Tech, and Nano technology man is faced with a…See More
7 hours ago
0 Comments 0 Favorites