Factual Data ~ Rothschild Does NOT Rule The World, But Who Does?

Most of you here have read my opinion time and again that Rothschild doesn't rule the world. I won't dispute his influence but I will dispute his being placed at the top of ANY pyramid that strives to outline the design of power. Pursuing documentation that Rothschild rules the world is folly of the highest magnitude and results in your being distracted and impotent, powerless to act because your overview is false. I'll provide the actual names of the people ruling the world using the link below. Try as you might to link Rothschild to them as their leader the fact remains, you can't. There isn't a link. He may be one of them but he's one of many with no more power or say-so then the others.

How do I reach these conclusions? I use facts.

They don't use speculation against us in this war, they use historic, social, economic, scientific and political facts against us. They do not speculate. We do. For that reason I prefer to use facts whenever possible to draw conclusions and develop my opinions.

The evidence that Rothschild does not control the world is overwhelming.

The rulers of the world, the Economic Elite, aren't loyal to a place, they have no country but most of them are directly related to the US and many were born and raised here and still reside here. To think that a man living in the UK with business ties to the UK with vast resources is at the top of the elite food chain is short sighted in view of social, economic and political trends that are apparent to any astute reader.

Here is the axis of greed:

Here are the institutions that manage the globe:

Most Americans have never heard of the Business Roundtable. They're busy following leads to the Vatican, the Jesuits, Masons or some weird Illuminati that's ill-defined and cloaked in intrigue, mystery and vice, all fallacies of the worst order. In the meantime the Business Roundtable manages the world using NATO as its security arm and using the UN, the IMF, the WHO, and the WTO as their motivators, the enforcers. 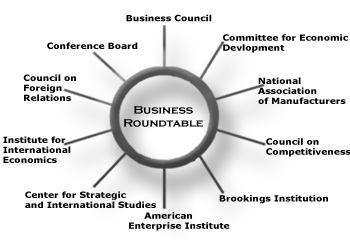 For a more complete overview of the people behind your world, the managers of the planet, with names and faces we all recognize use the link below to access the "Axis Of Greed."

Comment by Jeff on February 28, 2010 at 8:27pm
I didn't say you did. I was referring to other people who make claims that Rothschild rules the world and then use a ready-made internet image, a pyramid, to show Rothschild at the top and I think if people maintain that view they're not looking at the picture realistically.

Besides, you know me, if I thought you were saying that I would have been very clear about it.

Comment by Jeff on February 28, 2010 at 7:49pm
Too much emphasis is placed on Rothschild ruling the world Greg. The world is bigger then one man and NATO, the UN, the IMF, the WTO and the World Bank as enforcers and security arms are making a great many lethal and global decisions that Rothschild has little to do with but that many, many people confer on as can be reasonably deduced by the Bilderberg Group, The Trilateral Commission and other organizations with power and influence. No one man is at the top of this ladder.

I think perhaps the Carlyle Group may be small potato's by comparison and actually is an investment group, not a policy making organization while the groups listed actually make policy. I think that's a reasonable explanation.

Comment by Christopher on February 28, 2010 at 5:45pm
I noticed that The Carlyle Groupwas not in the long list of institutions that manage the globe.

Could this have been intentional, or was it an oversight, to some extent...what do you think?

Comment by Jeff on February 28, 2010 at 5:16pm
OK, well, posts meaning anything you post and since I've been notified more then 32 times you must have more them 32 posts but they probably appear as comments in the comment section at group sites so aren't registered as posts, but, ya got a lot of 'em baby!

Comment by Jeff on February 28, 2010 at 4:56pm
"They" is the keyword Greg, meaning, to me, Rothschild is not at the head of a controlling pyramid of people. It is they, meaning many people, perhaps 1,000 more or less.

Comment by Jeff on February 28, 2010 at 4:49pm
They are indeed, but far from the seat of power and control. That seat is global with a very strong link to the USA.

Comment by Jeff on February 28, 2010 at 4:48pm
No coincidence, we both read vital and critical current posts on the internet. It's apparent from the MANY re-posts we both have here. I'm approaching 700 total posts since joining but I suspect with discussions included you have many more. It's irrelevant. Bottom line, we both care about humanity.