AO says: Guardian Continues on the path that takes over the Internet since their lies don't sell papers and they want to shut us up. "Terrorism" took away our liberties and now "Hacking" takes away our voices. 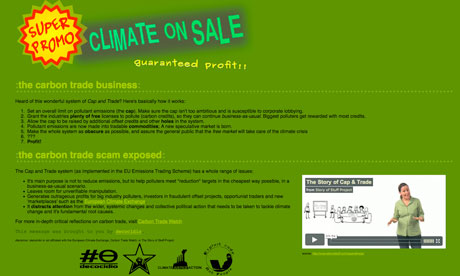 Hackers hijacked the EU carbon trading website and replaced it with a spoof page revealing the flaws in cap and trade.
Photograph: Guardian

Anti-carbon trading activists shut down the website of the European Climate Exchange (ECX), over the weekend, replacing the site with a spoof page lampooning the industry.

The website of the London-based carbon credit trading platform was hacked at close to midnight on Friday and showed the spoof homepage for around 22 hours. It then took technical staff another day to restore the official homepage.

Explaining the "carbon trade scam", the spoof site decried how the EU's flagship environmental policy is "susceptible to corporate lobbying," offers industry "licences to pollute so they can continue business-as-usual," and "generates outrageous profits for big industry polluters, investors in fraudulent offset projects [and] opportunist traders."

On Saturday, shortly after the ECX website went down, activists announced their handiwork on a number of environmental discussion groups, saying: "In a public act of digital direct action, the ECX website was taken offline and replaced with our message in an effort to try to raise awareness about carbon trading as a dangerous false solution to the climate crisis."

One of the activists responsible, from the online activist group, Decocidio, told the Guardian: "We feel the EU Emissions Trading Scheme is not well understood by the general public or even within the environmental movement. It is a major fraud touted by the mainstream media, politics, industry and lobbyists as the main solution." The group is part of Earth First, a radical environmental protest organisation.

"Attempting to cause as much inconvenience, economical loss and image damage as possible, we deliberately tried to maximise the virtual damage," said the hacker, who spoke on condition of anonymity.

A spokeswoman for the European Climate Exchange, Kelly Loeffler, said: "We
have no comment relating to the incident as there is nothing to report publicly."

The exchange was also targeted by activists from Climate Camp last summer. They dubbed it a "climate change casino".

Damien Morris, of Sandbag, a self-described "critical friend" of the EU ETS said: "It's very unfortunate that this sort of infighting over emissions trading has developed within the environmental movement, especially on the radical end," he said. "There seems to be a large grassroots following and public presence of these sorts of ideas, but not at the more technical and realistic, solutions-focussed part of the movement."

"There is certainly a place for criticism of the ETS, but the problem with those who disagree with carbon trading is that they oppose it in principle, not in practice. It's a good idea when done properly. There are many problems with the ETS, but there is a clear pathway as to how it can be made more effective and robust."

Central Scrutinizer favorited Phyllis Maka's blog post HAHA! HEY NANCY HOPE YOU DROP DEAD BEFORE BIDEN DOES! ALL YOU ARISTOCRATS YOU MUST BE IN YOUR 90'S or 100'S NOW
19 minutes ago