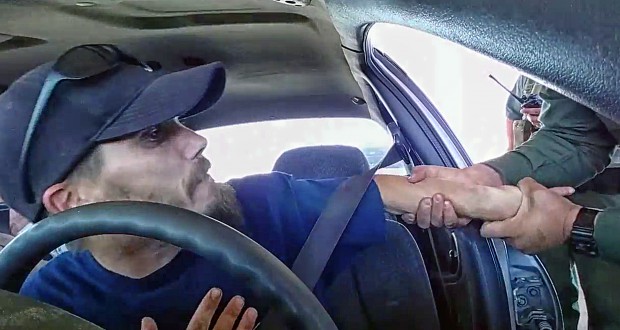 A family of three were coming through a Border Patrol station that was more than 50 miles inside the US border. Upon pulling up to a Border Patrol agent, the man was asked where he was going and in response the man said he didn't have to answer the question, which is true under the law. Agents then pulled him from the vehicle and arrested him.

Understand that Border Patrol is an unconstitutional agency under the Executive Branch of the federal government. Our Constitution does not provide for a Border Patrol agency at all, much less one that is located away from the border.

According to the dashcam video of the incident, the husband and wife and son were having a little talk back and forth before their approach of the Border Patrol agent. Once the vehicle was stopped, here's how the incident went down.

"How are you, where are you going to today?" asked the agent.

The question was repeated and the man refused to answer the question. As a result, the man was asked to pull his car over and park it. The man refused and you can see the agent's hand illegally slip in through the window in an attempt to get inside the vehicle.

"Get your hands out of my car," the man told the agent. He forces the agent's arm out of the car as the agent unlawfully opens his door and attempts to pull him out of the vehicle, even though he still has his seat belt buckled.

"Dude what is your problem?" the man asked in frustration. "I've got to unbuckle my seatbelt. … You're being recorded."

"This is assault," he said. "What is your reasonable suspicion?"

The man is alluding to the Fourth Amendment, something that is supposed to be upheld by these people.

The man does answer the question of his citizenship as a "United States citizen." His wife also affirms she is a citizen.

The agent then asks if there is anything in the trunk. The man says there is not and specifically tells the agent that he does not have his consent to either search the vehicle or seize anything.

The agent is once again asked for a reasonable suspicion, which he is denied. He is then forced out of the car and handcuffed.

While the agent acknowledge being recorded, his response for why he did what he was doing was that it was not "against policy."

Maybe it's not against "policy," but it is surely against the law. The Fourth Amendment states clearly:

The right of the people to be secure in their persons, houses, papers, and effects, against unreasonable searches and seizures, shall not be violated, and no Warrants shall issue, but upon probable cause, supported by Oath or affirmation, and particularly describing the place to be searched, and the persons or things to be seized.

The agent then entered the car and moved it and as he did, he claimed that the dog alerted to the car, but he added, "Your husband put us in a bind."

Well, what about the bind these gestapo-style thugs put this family in?

Furthermore, the four-year-old didn't want the Border Patrol agent anywhere near him. He screamed, "I don't like you!"

The agents are clearly violating the Fourth Amendment as they begin to search the vehicle without permission, without a reasonable suspicion and without a warrant that would detail exactly what they are looking for. Clearly, they did not want the incident to continue to be recorded and the agent is seen turning off the camera.

Furthermore, these Border Patrol stations are not to be used to look for drugs as an initial reason for such apprehension. That is expressly forbidden as I have recounted before.

The man has been identified as Rick Herbert and the Border Patrol agent who violated Herbert's rights was J. Valdivia, according to his tag. The incident occurred on March 12, 2015 at a checkpoint 35 miles north of El Centro, a border town in California, east of San Diego. The video was uploaded on March 17, 2015. An account has been set up to help the family with attorney fees. If you wish to help, click here.

For some people to say, "Well, if had only answered the question posed to him, none of this would have happened" is to miss the point of who is doing what is unlawful in the first place.

Border Agent Called out on Unlawful Search by US Citizen – Watch Wh...

Border Patrol acts first, asks questions later.  I had been returning from Mexico, and somehow missed a border checkpoint, which was considerable miles from the border.  My dog needed a break, so I had taken a side road; not realizing that this road by-passed the checkpoint.  As I walked my dog, I had no idea that I was  being quietly surrounded by rifles, drawn and directly pointed at me.  Needless to say, I was shocked and totally dismayed, when I turned to return to my car and heard "Don't move!".  I couldn't help but snicker....(They didn't approve)....as I couldn't imagine this was 'really happening'.  They advised me that I had evaded their checkpoint, and they presumed that I was importing drugs.  They actually "asked" if they could check my car, and advised that if no drugs were present, they would allow me to leave.  Obviously, being alone, and having a dog that didn't like strangers - I decided to avoid further issue and allowed the car search.......Their demeanour changed drastically, as I believe I ruined their big bust of the day!  Being the focus of a firing squad was Not something I thought I would ever face - -

"I have an awful feeling your right."
37 seconds ago

"yeah then if you say what climate change ? that makes them real agro cunts."
2 hours ago

Mr. Sizzle commented on Boris's page 12160 Administrators
"No messaging capabilities either Bull. Tell me if works?"
3 hours ago

The boys go looking for Jeff. His mother doesn't know who he is! Then Jeff gets taken away by police for being mental.TEST TEST TEST I AM GERMAN
3 hours ago
0 Comments 0 Favorites

the mighty bull commented on Boris's page 12160 Administrators
"Not gonna let me post up a photo today is site on a bit of a go slow ? I will try later then. I…"
3 hours ago

"consider it done bro. I tell something cuz when a brown man joins in with the NF white powers it…"
4 hours ago

Mr. Sizzle commented on Boris's page 12160 Administrators
"I can’t post blogs, pics or favorite another post anymore. What is up?"
5 hours ago

Mr. Sizzle commented on Boris's page 12160 Administrators
"So obviously I’m banned from posting for some reason. Let me know what I did wrong and I can…"
5 hours ago

"At least there was no violence at the rally."
6 hours ago

In the frantic effort to co-opt all of culture to advance the cause of comprehensive revolution,…See More
11 hours ago
1 Comment 0 Favorites

"This statement can trigger asleep into a violence. That's how they resolve any dialog."
14 hours ago

"Been there, in Detroit and Georgia, etc., with huge chunks of ice, and rocks, and full cans of Coke…"
20 hours ago