As the Hunter Biden laptop scandal threatens to throw the 2020 election into chaos with what appears to be solid, undisputed evidence of high-level corruption by former Vice President Joe Biden and his son Hunter, the same crowd which peddled the Trump-Russia hoax is now suggesting that Russia is behind it all.

To wit, House Intelligence Committee Chairman Adam Schiff, who swore on National television that he had evidence Trump was colluding with Russia - now says that President Trump is handing the Kremlin a "propaganda coup from Vladimir Putin." 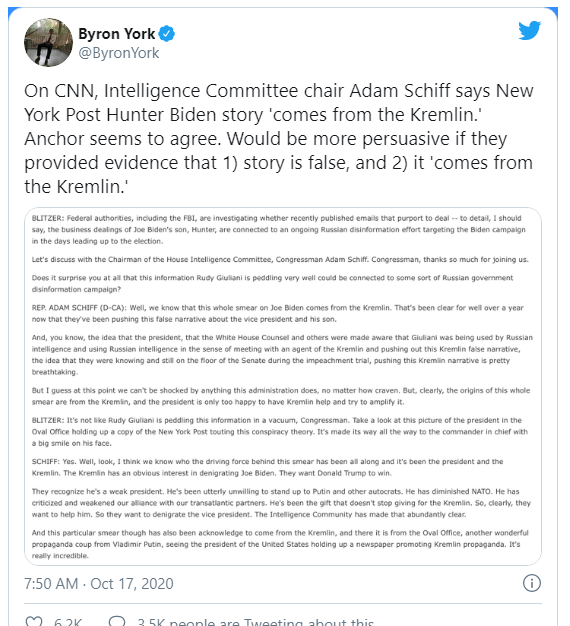 Headlines in major publications are perhaps even more conspiratorial:

And of course, propagandists are doing their thing...

Yet, if one looks at the actual facts of the case - in particular, that Hunter Biden appears to have dropped his own laptops off at a computer repair shop, signed a service ticket, and the shop owner approached the FBI first and Rudy Giuliani last after Biden failed to pick them up, the left's latest Russia conspiracy theory is quickly debunked. 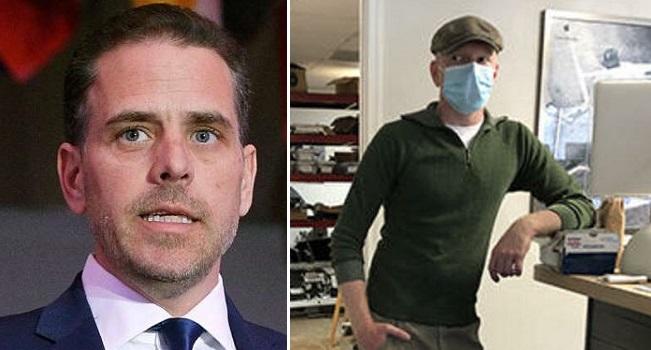 This is the story of an American patriot, an honorable man, John Paul Mac Issac, who tried to do the right thing and is now being unfairly and maliciously slandered as an agent of foreign intelligence, specifically Russia. He is not an agent or spy for anyone. He is his own man. How do I know? I have known his dad for more than 20 years. I’ve known John Paul’s dad as Mac. Mac is a decorated Vietnam Veteran, who flew gunships in Vietnam. And he continued his military service with an impeccable record until he retired as an Air Force Colonel. The crews of those gunships have an annual reunion and Mac usually takes John Paul along, who volunteers his computer and video skills to record and compile the stories of those brave men who served their country in a difficult war.

This story is very simple–Hunter Biden dropped off three computers with liquid damage at a repair shop in Wilmington, Delaware on April 12, 2019. The owner, John Mac Issac, examined the three and determined that one was beyond recovery, one was okay and the data on the harddrive of the third could be recovered. Hunter signed the service ticket and John Paul Mac Issac repaired the hard drive and down loaded the data. During this process he saw some disturbing images and a number of emails that concerned Ukraine, Burisma, China and other issues. With the work completed, Mr. Mac Issac prepared an invoice, sent it to Hunter Biden and notified him that the computer was ready to be retrieved. Hunter did not respond. In the ensuing four months (May, June, July and August), Mr. Mac Issac made repeated efforts to contact Hunter Biden. Biden never answered and never responded. More importantly, Biden stiffed John Paul Mac Issac–i.e., he did not pay the bill.

When the manufactured Ukraine crisis surfaced in August 2019, John Paul realized he was sitting on radioactive material that might be relevant to the investigation. After conferring with his father, Mac and John Paul decided that Mac would take the information to the FBI office in Albuquerque, New Mexico. Mac walked into the Albuquerque FBI office and spoke with an agent who refused to give his name. Mac explained the material he had, but was rebuffed by the FBI. He was told basically, get lost. This was mid-September 2019.

Two months passed and then, out of the blue, the FBI contacted John Paul Mac Issac. Two FBI agents from the Wilmington FBI office–Joshua Williams and Mike Dzielak–came to John Paul’s business. He offered immediately to give them the hard drive, no strings attached. Agents Williams and Dzielak declined to take the device.

Two weeks later, the intrepid agents called and asked to come and image the hard drive. John Paul agreed but, instead of taking the hard drive or imaging the drive, they gave him a subpoena. It was part of a grand jury proceeding but neither agent said anything about the purpose of the grand jury. John Paul complied with the subpoena and turned over the hard drive and the computer.

In the ensuing months, starting with the impeachment trial of President Trump, he heard nothing from the FBI and knew that none of the evidence from the hard drive had been shared with President Trump’s defense team.

The lack of action and communication with the FBI led John Paul to make the fateful decision to contact Rudy Giuliani’s office and offer a copy of the drive to the former mayor. We now know that Rudy accepted John Paul’s offer and that Rudy’s team shared the information with the New York Post.

John Paul Mac Issac is not responsible for the emails, images and videos recovered from Hunter Biden’s computer. He was hired to do a job, he did the job and submitted an invoice for the work. Hunter Biden, for some unexplained reason, never responded and never asked for the computer. But that changed last Tuesday, October 13, 2020. A person claiming to be Hunter Biden’s lawyer called John Paul Mac Issac and asked for the computer to be returned. Too late. That horse had left the barn and was with the FBI.

John Paul, acting under Delaware law, understood that Hunter’s computer became the property of his business 90 days after it had been abandoned.

At no time did John Paul approach any media outlet or tabloid offering to sell salacious material. A person of lesser character might have tried to profit. But that is not the essence of John Paul Mac Issac. He had information in his possession that he learned, thanks to events subsequent to receiving the computer for a repair job, was relevant to the security of our nation. He did what any clear thinking American would do–he, through his father, contacted the FBI. When the FBI finally responded to his call for help, John cooperated fully and turned over all material requested.

The failure here is not John Paul’s. He did his job. The FBI dropped the ball and, by extension, the Department of Justice. Sadly, this is becoming a disturbing, repeating theme–the FBI through incompetence or malfeasance is not doing its job.

Any news outlet that is publishing the damnable lie that John Paul is part of some subversive effort to interfere in the United States Presidential election is on notice. That is slander and defamation. Fortunately, the evidence from Hunter Biden’s computer is in the hands of the FBI and Rudy Giuliani and, I suspect, the U.S. Senate. Those with the power to do something must act. John Paul Mac Issac’s honor is intact. We cannot say the same for those government officials who have a duty to deal with this information.

This one is the most important video ever released in internet history. This has to be listed…See More
3 hours ago
0 Comments 1 Favorite

Central Scrutinizer favorited Phyllis Maka's blog post Jim Stone - I got all the most important corruption videos processed and uploaded, these will stream from the voterig com server.
4 hours ago

Larry Flinchpaugh commented on Larry Flinchpaugh's blog post Pandemic Over Reaction
"This is hard to believe but if true, how do we stop this insanity?   Hopefully this is…"
14 hours ago