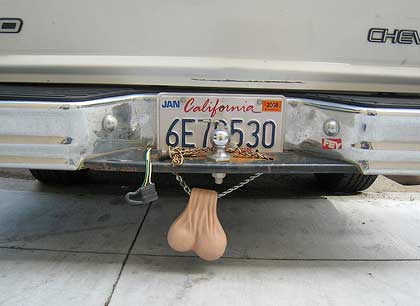 BONNEAU, S.C. (AP) - A Berkeley County woman will get a jury trial for a ticket she was given by police for displaying big plastic testicles on the back of her pickup truck.

Virginia Tice of Bonneau was given a $445 ticket July 5 that accuses her of violating the state's obscene bumper sticker law.

Police Chief Franco Fuda asked for a jury trial, saying questions of obscenity should be determined by community standards.

Tice's attorney, Scott Bischoff, expects a trial next month. A relative said Tice didn't want to talk about the case before the trial.

She was ticketed after pulling into a gas station in her truck with big red fake testicles hanging from the trailer hitch.

I can't imagine sporting those as a guy. I think I'd get sympathy pains every time I ran over a speed bump to fast.

The Eighth Amendment to the U.S. Constitution reads:

“Excessive bail shall not be required, nor excessive fines imposed, nor cruel and unusual punishments inflicted"

this stuff get my 'BALL IN AN UPROAR!!"

LADIES AND GENTLEMEN OF THE JURY THE STATE OF WAWAWA...  HAS BIGGER BALLS THAN I COULD EVER HOPE TO HAVE DRAGGING ME IN HERE AND COSTING THE STATE ALL THIS MONEY AND DO THEY NOT HAVE EYES??   THEY ARE OBVIOUSLY HANGING BIG ASS BALLS NOT A BUMPER STICKER!  I MOVE THE COURT TO DISMISS BECAUSE THERE IS NO CAUSE OF ACTION AGAINST ME ..  I HAVE HARMED NO ONE!!

Comment by Tara on July 28, 2011 at 10:22am
I'm not sure why she would want a set of big balls on the back of her car for but she does have the right to express herself under the first amendment. I don't see anything obscene about it. For all we know she could use these balls has punching bags, who knows? Maybe bad memories of a past relationship? Hopefully a jury will find her innocent because convicting this woman of obscenity is way over the top. It's ridiculous.

Comment by truth on July 27, 2011 at 11:58pm
Guess kudos to the police chief for asking for a jury trial. Not sure that's his call yet it seems best way to go.

We need to stop feeding the Beast!

Here is a sample of this bloated Bill to replace and augment HR 6666. to wit:SEC. 222. NATIONAL…See More
7 hours ago
0 Comments 0 Favorites

Less Prone replied to MAC's discussion AG Barr Destroys His Name for All Eternity – His Actions Today Confirm He Is Just Another Card-Carrying Swamp Rat
"Would a rat rat another rat?"
10 hours ago