List of Food Products, Cosmetics and Vaccines Made Using Cells From Aborted Babies 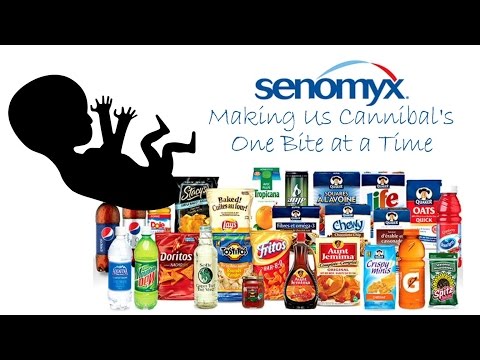 Many propagandists claim that fetal cells are derrived from one cell line, one fetus, decades ago.  Here is Sayerji from Green Meds research on the currency of fetal cell lines.  “BIOTECH’S DARK PROMISE!

Excerpt:  Known as diploid cell vaccines (diploid cells have two (di-) sets of chromosomes inherited from human mother and father), they are non-continuous (unlike cancer cells), and therefore must be continually replaced, i.e. new aborted, live fetal tissue must be harvested periodically.

ASIDE FROM FETAL CELLS, These specialized molecules trick the tongue into not tasting the bitterness naturally inherent in foods such as cocoa or soy. Moreso, Senomyx is considered propriety and is not labelled. Think about the social implications of a child thinking he is tasting something sweet when it is not….it is just an affect the nano technology of synomex has on the tongue.  Truly we are in an age that no one can trust their five senses.

SNOPES: Although Snopes dances around whether there are fetal cells in Pepsi…they confirm that Pepsi has a deal with Senomyx producers and that Senomyx indeed uses a technology that is derived from fetal cells.

Not part of Senomyx – Neocutis Products:
This company produces anti wrinkle creams that contain cells from a 14 week gestation aborted malebaby. Following is the list of the creams, but we recommend a full boycott of all Neocutis Products.
• Bio-Gel Prevedem Journee
• Bio-Serum Lumiere
• Bio Restorative Skin Cream

VLA COMMENT: It must be over 10 years ago that VLA tried to influence the FDA regarding Senomyx when it was just getting off the ground. We did the same with GMO technology…but much of the corporate establishment knows no bounds when it comes to greed.   There is more to know.

This bears repeating:  ASIDE FROM FETAL CELLS, These specialized molecules trick the tongue into not tasting the bitterness naturally inherent in foods such as cocoa or soy. Moreso, Senomyx is considered propriety and is not labelled. Think about the social implications of a child thinking he is tasting something sweet when it is not….it is just an affect the nano technology of synomex has on the tongue.  Truly we are in an age that no one can trust their five senses.

San Diego-based Senomyx has created novel flavors such as cold and creamy based on a rethinking of how taste buds perceive flavor. Using nanoscale assays, researchers have identified which individual cells on a given taste bud perceive a flavor. Each cell would recognize just one of the five main flavors — bitter, salty, sweet, sour and umami. Working within this conceptualization, the company has developed a library of flavors, incluing compounds called bitter blockers. These specialized molecules trick the tongue into not tasting the bitterness naturally inherent in foods such as cocoa or soy. These bitter blockers as well as Senomyx’s sweet and salty enhancers have already gotten the nod of approval from food giants such as Nestle and Coca Cola who are responding to consumer desires for packaged foods and beverages formulated with less salt and sugar. READ MORE…

Children of God for Life released a new list this week that informs consumers about products that are made or tested with cells from aborted babies.

The pro-life organization’s popular list has been successful in persuading companies like PepsiCo and Kraft to switch to ethical alternatives for testing their products.

In an email to supporters this week, the pro-life group said it noticed some confusion about how aborted babies’ cells are involved with certain products on the list. Organizers released the new list to clarify any confusion.

“There are no food products containing aborted fetal material – nor has there ever been!” the group said in the email to LifeNews.

Our very successful Pepsi Boycott drew world-wide attention back in 2011-2012 when prolife organizations and other concerned individuals joined our efforts to force PepsiCo to alter their agreement with Senomyx. This company produces artificial flavor enhancers for several foods and beverage companies and they were testing those flavors using the aborted fetal cell line HEK-293.

Despite the fact that we emphasized the HEK-293 was only used to test the products and was not actually in the flavorings, some websites put out wildly dramatic headlined stories that people were consuming dead babies!

The group noted that there are some vaccines, medicines and cosmetics that do use materials derived from aborted babies directly in the product. The list, which can be found here, provides details about the products.

Pro-lifers have been using the list for many years to stay away from unethical products and vaccines. It is an easy, one-page reference guide. Its vaccine list also notes when there are ethical alternatives.

The list has prompted massive campaigns against Pepsi, Kraft, Campbell Soup and other companies that had products tested with cells from aborted babies. In each case, the companies responded positively to pro-lifers’ concerns.

The 2012 campaign involving PepsiCo proved very successful, and the company agreed to alter its contract with the biotech firm that uses cells from aborted babies in some of its tests. Pro-lifers praised the company for listening to their concerns.

Echoing what many doctors have said, Debi Vinnedge, of Children of God for Life, emphasized that aborted babies’ bodies are not necessary for medical research or product development.

In a 2015 article at LifeNews, Vinnedge said aborted fetal material has never been used to cure any disease, and vaccines can be developed with ethical alternatives.

“The fact of the matter is that aborted fetal tissue is absolutely unnecessary for vaccine production or any medical research. There are numerous FDA approved moral cell lines and if human cells are desired, they can be obtained from a plethora of non-objectionable sources including umbilical cord, cord blood and other adult stem cells,” Vinnedge said.  https://www.lifenews.com/2018/06/08/pro-life-group-releases-list-of...

Thankfully, there is nothing on that list that I would eat regardless of the Luciferian connection. Junk food, brought to you by the good folks at Family Planning. Would you like some fetal fries with that abortion burger?

Thanks, cheeki! This blew my mind. Even my family couldn't believe it, and they're used to me shocking them.

Right on, Chris! I have used some, but I shant anymore! Evil strikes a new blow.

I don't consume any of the products listed. Lucky me...

Mr. Sizzle replied to Central Scrutinizer's discussion John Prine, One of America's Greatest Songwriters, Dead at 73 in the group MUSICWARS
"I was going to post one of his songs but I found this interview to celebrate his life…"
3 hours ago

The United States is at the very precipice of a dangerous transformation of our society, freedoms,…See More
3 hours ago
0 Comments 1 Favorite

"John Deer's greed will effect us all in the end! By making it too expensive to repair the…"
6 hours ago

Ultra-Orthodox Haredim Jews in Jerusalem shout "Nazis" against them, coughing over the Israeli police trying to implement the measures taken due to the coron...
6 hours ago
0 Comments 0 Favorites

Central Scrutinizer replied to MAC's discussion Lets Get Them All! Gates Birx Fauci Soros all of them
"I'm ready to fuck some assklowns up folks....."
10 hours ago

Central Scrutinizer favorited MAC's discussion Lets Get Them All! Gates Birx Fauci Soros all of them
10 hours ago