Only in America can a beleaguered company with a checker past such as Monsanto’s, which includes a nasty little habit of poisoning entire towns with toxic waste, battle it’s way to the top of the dung heap to deliver a fatal blow to the people and planet with a deadly and insidious type of chemical and biological warfare via the genetic modification and patenting of transgenic seeds, as well as the coating of our farmland with toxic chemicals.

And to top it all off, the U.S. government, which is supposed to be financed by we the people, is actively promoting this biological warfare by stealthily allowing the rampant infection of approximately 85% of our processed food with unregulated transgenes that Monsanto executives admit will have unknown effects on the environment and life.

Did I mention that these transgenes also include a virus that is 70-90% identical to the HIV and Hep B viruses? 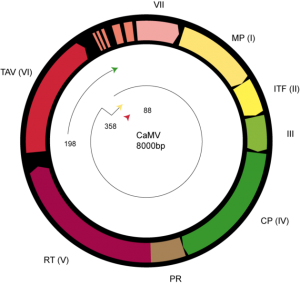 Because of the limitations of the technology, in most cases the process will also necessarily involve the insertion of genetic material from at least one foreign pathogen, the most common of which (the 35S promoter) is taken from a virus which is very similar to Hepatitis B and related to HIV. The consequences of using such elements have even been questioned by researchers at the John Innes Institute, one of the UK’s premier research establishments in the field of agricultural genetic engineering. Despite this, routine use of such pathogen-derived elements continues.

The Cauliflower Mosaic Virus promoter (CaMV 35S) is used in most transgenic crops to activate foreign genes which have been artificially inserted into the host plant. It is potentially dangerous.

Did you get that? Approximately 85% of the processed food on our store shelves contains products infected with transgenic material containing a virus that is 70-90% identical to the HIV and Hep B viruses. And our government, in collusion with companies such as Monsanto, is in charge of the attack, using “science” as a battle shield to fend off any who would question their tactics. But can what these people are doing actually be called “science?”

Comment by macmarine on April 5, 2011 at 9:42pm
Democracy is dead, pleading/petitioning doesn't work (you can't petition your owners), there's no such thing as "redress of grievances" anymore! They will kill us … lest we kill them first!

Oh...... but our government loves us so and wants the best for us.....yeah, right! Mad scientists (eugenicists probably) have control over our food and our government is in bed with them for profit.....whores to the corp once again.

" This is blatant elder abuse and age discrimination. A similar situation happened here where a…"
4 hours ago

This has to be this biggest F U in history. Stand up america it's way past time.Steve…See More
4 hours ago
0 Comments 0 Favorites

"Great educational leaders back in the day to had an understanding of what a soul was, and went out…"
4 hours ago

Elderly people are being subjected to genocidal torture locked in care homes and not legally allowed to go out, or have a visit, be hugged by, or to hold the...
4 hours ago
1 Comment 0 Favorites

"So that's their party policy, to end their violence if they win the election. I think anyone…"
5 hours ago

"I lost respect for Ben Shapiro when he complained about Trump firing the War Hawk, John Bolton."
6 hours ago

"Too bad more people don't understand what he is saying!"
7 hours ago

Central Scrutinizer commented on Phyllis Maka's blog post Jim Stone: this was not a broadcast glitch, Pelosi actually glitched like that in real life. WTH is going on???
8 hours ago