The Department of Homeland Security (DHS) is speading its tendrils across America like a cancerous tumor invading surrounding cells.

Responding to the terrorist attacks on September 11, 2001, the federal government launched a misguided attempt to consolidate terrorist information among different intelligence and law-enforcement agencies by creating a super-agency, the Department of Homeland Security (DHS). 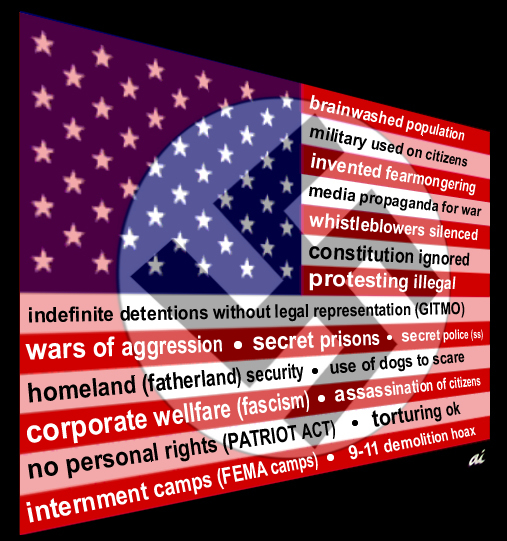 The gargantuan agency swallowed up the FBI, CIA, and Coast Guard while creating a new bastard child: the Transporatation Security Agency.

What began as an attempt to increase protection has become America’s modern version of the old Nazi Gestapo.

Comparing the Department of Homeland Security to the loathed Nazi security police is not too much of a stretch.

The DHS is preparing to implement plans to track all American citizens. Homeland Security is gearing up to install manned security checkpoints at bus depots and in train stations, sports stadiums, and hotels, and shopping malls.

They also intend to deploy surveillance drones across America’s cities and farmland, and surreptitiously scan motorists on the roads to determine if the drivers and passengers somehow fit terrorist profiles only the unseen “authorities” know.

Test programs are activating smart cameras using artificial intelligence scripts to scan faces in crowds and determine if an individual is a “person of interest” to the nameless, faceless authorities.

Some in the FBI are now suggesting that even people’s tattoos be registered.

Worse, “mind reading helmets” are being developed to analyze and predict any person who may be suspected of illegal activities by the State. Who are the suspects? Chances are, you’ll be one of them.

Hidden scanners will be everywhere

According to gizmodo.com, “Within the next year or two, the U.S. Department of Homeland Security will instantly know everything about your body, clothes, and luggage with a new laser-based molecular scanner fired from 164 feet (50 meters) away.” [Hidden Government Scanners Will Instantly Know Everything About You From 164 Feet Away]

The Department of Homeland Security. Even the name has a fascist ring to it.

After the DHS assimilated FEMA, they jointly published a new manual outlining how to contain, detain, and constrain Americans during any type of national emergency that runs the gamut from a nuclear attack to the president stubbing his toe. Download this document [PDF] describing the formation and organization of America’s new “Black Forces Gestapo.”

A brave American patriot, Steven L Anderson, took it upon himself to challenge the unConstitutionality of the creeping and expanding powers of Homeland Security that, left unchecked, may do more than swallow up intelligence and law enforcement. It may eventually swallow up most of America and along the way individual liberty.

We’re here to protect you, now bend over

FOR THE REST OF THE LOOONG STORY PLEASE VISIT:

My diagnosis does not bear repeating. Y'all know what I think. The smell of the cat box never improves until you remove it permanently. Our DHS chief is batshit crazy. She still will NOT say who did 9-11 and the other attacks on the U.S. and its financial structure, nor arrest any of these or other attackers.

The DHS just wants to fondle your daughter, son, your wife, and you, with plenty of leather and killer hollow-point ammunition to set the mood. Now, the Social security Administration and the National Oceanographic and Atmospheric Administration will be supplied with hundreds of thousands of killer hollow point rounds to threaten and force rain and snow back into the sky. The .357 rounds of hollow point ammunition for the SSA are a guaranteed kill on geriatric targets and will easily take off an arm or leg with a bone hit.

Central Scrutinizer favorited Phyllis Maka's blog post The Kraken & Panic In The D.C. The following key takeaways listed below come from the following very important video—please pass this around.
3 minutes ago

cheeki kea commented on Chris of the family Masters's blog post Don't Refuse COVID Vaccine.
"https://www.aap.com.au/can-australians-be-locked-up-for-refusing-a-covid-19-vaccine/ this is one of…"
1 hour ago

cheeki kea commented on Chris of the family Masters's blog post Don't Refuse COVID Vaccine.
"So.. ~ In order to make a fully informed decision, and stated. As is ones Right to do so. Good idea…"
1 hour ago

"Mr. Evil got the cake. The face of evil: Qantas CEO, Alan Joyce"
3 hours ago

Use the Conditional Acceptance instead.Refusal will put you in dishonor because in Roman Civil Law…See More
3 hours ago
2 Comments 0 Favorites

Chris of the family Masters commented on Daily Con's blog post COVID 21? Canadian Liberal Party Committee Member’s warning letter: Real or Hoax?!
"This may be as well legit. I think variations of this document have been around for months."
4 hours ago

I  am posting the attached letter for archival purposes. Call it morbid curiosity.Back in October…See More
6 hours ago
3 Comments 0 Favorites

Daily Con favorited Don Mashak's discussion Call for the media, lawyers, clients, & the rest of the public to join forces to tell their stories of judges’ abuse at unprecedented citizens hearings. By Dr. Richard Cordero
7 hours ago