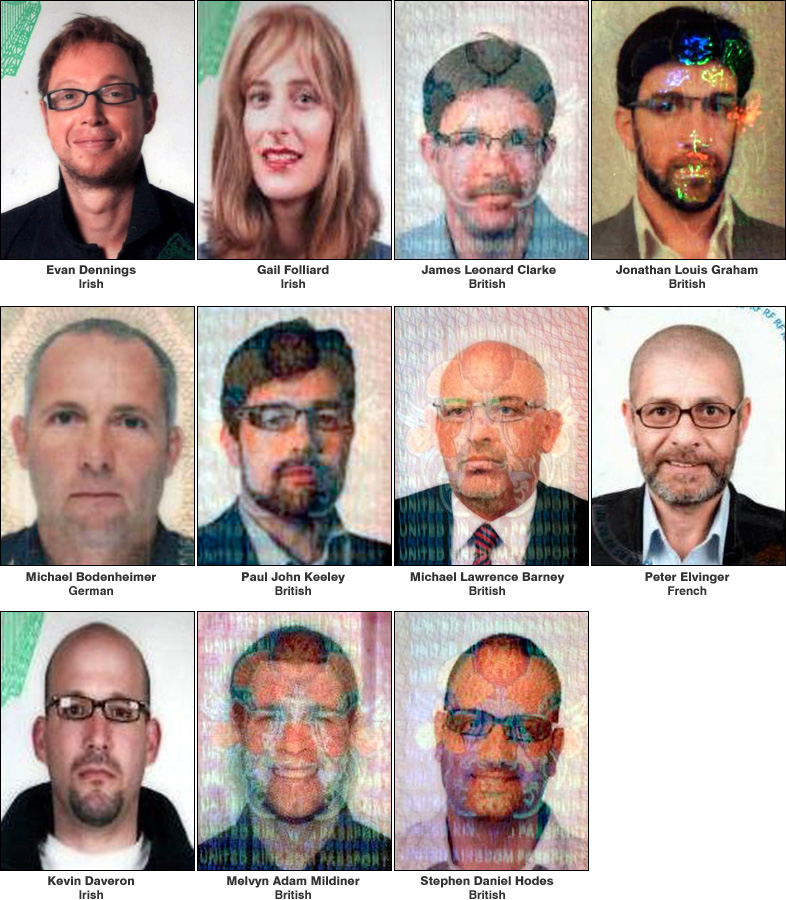 The government in Dubai has issued pictures of 11 "agents with European passports" that it suspects of involvement in the assassination of a top Hamas official last month.

Hamas, the Palestinian Islamist movement, accused Israeli agents of killing him. Reports said he was in Dubai to buy weapons for the organisation.

Dubai's police chief said six of the suspects had British passports, three were Irish, one French and one German.

The passports are believed to be fakes.

Police in Dubai are to issue arrest warrants for 11 "agents with European passports" suspected of assassinating a top Hamas official last month.

Reports have suggested that he was in Dubai to buy weapons for Palestinian Islamist movement Hamas. It has accused Israeli agents of killing him.

Dubai's police chief said six of the suspects had British passports, three were Irish, one French and one German.

One of the group was a woman with Irish papers in the name of Gail Folliard. The other Irish suspects were named as Kevin Daveron and Evan Dennings.

The Foreign and Commonwealth Office and their Irish counterparts have said they are investigating.

Officials in Dubai said the team appeared to be a professional hit-squad, most likely sponsored by a foreign power, suggesting the team were operating on false documents.

He showed CCTV footage of the group entering the hotel where Mr Mabhouh was staying.

At one point the men appear to don wigs and false beards.

"We do not rule out the involvement of Mossad (the Israeli secret service), but when we arrest those suspects we will know who masterminded it," Lt Gen Dhafi Khalfan Tamim said.

"We have no doubts that it was 11 people holding these passports, and we regret that they used the travel documents of friendly countries," Lt Gen Tamim said.

Lt Gen Tamim said the identities had been passed on to Interpol, as part of an official request for international arrest warrants to be issued.

Mr Mabhouh was electrocuted and suffocated, according to reports last month.

Lt Gen Tamim said the suspects had followed Mr Mabhouh into Dubai from Syria, where he lived since 1989, before fanning out to stay at different hotels to avoid detection.

Two Palestinians who aided the team have been arrested, the police said.

Mr Mabhouh was a founder member of the Izzedine al-Qassam Brigades, and was thought to be behind the kidnap and murder of two Israeli soldiers in 1989 during the first Palestinian Intifada.

The Izzedine al-Qassam Brigades have been responsible for suicide bombings and rocket attacks across Israel.

Israel has refused to comment on the accusations its security forces were behind the killing.

Comment by Tara on February 19, 2010 at 2:12pm
British threat to Israel over Dubai Hamas assassination

Britain will consider severing its intelligence-sharing agreement with Israel if Mossad agents are proved to have stolen the identities of British passport holders, The Daily Telegraph has learnt.

Even with pictures of 11 suspects beamed around the world, intelligence analysts said yesterday the chances of those who killed Mahmoud al Mabhouh being brought to justice are “zero to nil”.

Bruce Riedel, a senior fellow at the Brookings Institution who spent 29 years with the CIA and served on the US National Intelligence Council, said he had little doubt that Israel’s foreign intelligence agency, Mossad, was behind the murder. He said he had spoken with officials in Israel who are “well-positioned” to know.

That does not mean they ever will face trial, Mr Riedel said.

“There’s zero to nil chance they’ll be apprehended; they’re all safely back in Israel by now. They would have flown out to Athens or Frankfurt or wherever, dropped their passports and got a connecting flight home with Israeli documents.”

Although there is no confirmation that Mossad was involved, Dubai Police have said the killing fits the agency’s “method”.

The Israeli government has not denied involvement.

Video footage released by police on Monday shows 11 suspects, one of them a woman, dressed as tourists or businesspeople.

The Mossad team that bungled the attempted assassination of the Hamas leader Khaled Meshaal in Jordan in 1997, trying to kill him by spraying a nerve agent in his ear, also posed as tourists. In that operation, they used Canadian passports, leading to a major diplomatic incident in which Canada temporarily withdrew its ambassador to Israel.

Yossi Melman, a journalist with the Israeli newspaper Haaretz who has written two books on the inner workings of Israel’s security agencies, agreed that the details that emerged on Monday further implicated Mossad.

Mr Reidel said the group would have worked in teams of three or four, with one leader who would have been the only person to know all the operatives involved.

That aligns with the Dubai Police assessment that there was one co-ordinator, a man police said used the name Peter Elvinger, who was travelling with a French passport and booked a room at Al Bustan Rotana hotel in the same corridor as al Mabhouh.

“He wouldn’t be one of the killers, but he’d be there and make all the decisions on whether to go forward,” Mr Riedel said. “It would be someone with a lot of experience in clandestine operations.”

Analysts cast doubt on police statements that the operatives travelled under their own identities.

British and Irish embassy officials also said yesterday the passports from their nations used in the operation were fakes.

“These people are trained to change identities,” said Dr Ahron Bregman, an expert in Middle East security at King’s College in London. “It’s very easy for the big organisations to get false passports and documentation to travel on.”

However, Mr Riedel said photographs of the operatives were likely to be genuine; although the intelligence agents assume new identities, they use real photographs to pass customs checks.

“This team is compromised, and they can’t be used in this kind of operation anymore,” he said. “This is a big problem with this kind of operation: these people have to be extremely highly trained but it’s very possible that on an operation like this their identity will be compromised. Every police and intelligence service in the Middle East will now have their pictures, so they’ll be assigned to a desk job for the rest of their careers.”

Kidon, the unit of Mossad that carries out assassinations, was thought to have about 48 agents in 1998, six of whom were women, according to a security expert.

Mr Riedel said that this is a risk that Israel would have been willing to take. “They would have known that this could well happen,” he said.


“That’s the price of the operation and Israel would have been willing to pay it to get a big fish.”

Comment by Tara on February 17, 2010 at 11:21am
Britons had passport details stolen by ‘Mossad death squad’

Comment by illuminated-dj on February 16, 2010 at 7:03pm
i agree tara,they use these guys all over

King Of Cups commented on King Of Cups's blog post The Satanic and Masonic Unholy Church of Darwinism and Neo-Darwinism. Brought to you by the Illuminati controlled Royal Society
"The Theory of Evolution and the Big Bang Theory are nothing more than early examples of…"
5 hours ago

King Of Cups commented on King Of Cups's blog post LGBT Movement: One of Cultural Marxism's Trojan Horses
""Leaderless resistance" reminds me of the failed "Occupy Movement" designed to…"
5 hours ago

James Roberts replied to stormtruther's discussion Are They Burning Dead Bodies In Wuhan, China To Hide The Inadvertent Release Of A Mortal Nerve Toxin? ( I vote plausible)
"I don't see how a nerve toxin could be responsible. Yeah, a tiny amount of Sarin can kill a…"
7 hours ago

James Roberts favorited stormtruther's discussion Are They Burning Dead Bodies In Wuhan, China To Hide The Inadvertent Release Of A Mortal Nerve Toxin? ( I vote plausible)
7 hours ago

James Roberts commented on steve's blog post WARNING WARNING WARNING Making a transwahhhhhman
"When I was still with my ex, who worked in surgery, we watched the Faces of Death and Traces of…"
7 hours ago