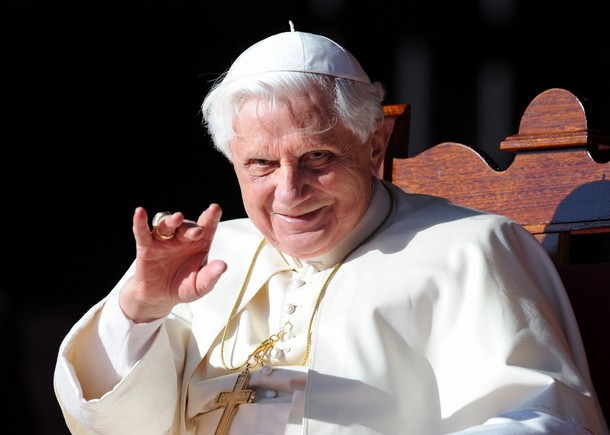 Pope Benedict says that we need a world government.

That is one of the main themes of his brand new encyclical entitled Caritas in Veritate, or Charity in Truth.  In it, Pope Benedict publicly calls for a "true world political authority" with "real teeth". At a time when many other prominent world leaders are openly calling for a "New World Order", to have the Roman Pontiff openly state that we need a world government is more than a little alarming, and it is yet another clear sign that we are living in the last days.

The 144 page encyclical is the result of an intensive 2 year effort by Pope Benedict to bring Catholic social teaching up to date on issues such as economic development, terrorism, sex tourism, population issues, bioethics and the environment.

As he called for world government in the encyclical, the Pope chose words that were very direct and to the point:

"There is a strongly felt need... for a reform of the United Nations Organisation, and likewise of economic institutions and international finance, so that the concept of the family of nations can acquire real teeth... there is urgent need of a true world political authority."

What in the world would a global government with "real teeth" look like?

According to Pope Benedict, the job of such a world political authority would be "to manage the global economy; to revive economies hit by the crisis; to avoid any deterioration of the present crisis and the greater imbalances that would result."

So it is not just a one world government that Pope Benedict is advocating.

He is also officially recommending that the one world government would "manage" a one world economic system.

Has Pope Benedict been reading the writings of Karl Marx?

Since when is it the job of the Pope to advocate the "large-scale redistribution of wealth"?

Apparently that would mean taking wealth away from Americans and Europeans and giving it to others.

When Pope Benedict puts out an encyclical that recommends the adoption of a one world government and a one world economic system, it shows all of us how close to the last days that we really are.

What will Pope Benedict call for next?

A one world religion?

After all, most Bible prophecy scholars agree that three of the  main pillars of the Antichrist's system will be a one world government, a one world economic system (the Mark of the Beast, etc.) and a one world religion.

Pope Benedict's declaration that we need a one world government and a one world economic system should be a huge wake up call for all of us.

We are in the last days.

It is time to get ready.

Wow, yea he is a creepy lookin critter huh.

Could they have picked someone else not so evil looking?"They will hide behind religous and political figures"

Anyone that still follows or worships an idol, including the pope needs to "check themselves before they wreck themselves". He isn't God nor do I think he has favor from the God that I've come to know. Just look at the pic above. He is pure evil incarnate. CREEPY!!!!!

Mr. Sizzle commented on Aaron's blog post The coronavirus vaccine is the “final solution” depopulation weapon against humanity; globalists hope to convince BILLIONS of people to commit “suicide-via-vaccine”
"https://www.5gexposed.com/Another contingent in the demonic cult to destroy Humanity."
52 minutes ago