Long term internet users will no doubt have experienced how different it is now to “search” online, than it was perhaps less than two years ago, and that on many occasion when you try and search for “something” such as 'Christchurch Shooting Hoax or False Flag' etc., instead of getting a list of posts that actually relate to the words ‘shooting hoax’ or ‘false flag’, - you often get in its place a whole list of other posts that don’t actually address the ‘shooting hoax or false flag’ aspect of the search.   Instead you’ll get inundated with 100’s of listings made by the MSM and that seem to cover the ‘official narrative’ first, and not the fact there are other posts that are calling the story a hoax or false flag.

I decided to add this blog, as it’s not since I recently uploaded the video below, (link to the blog and video) that for the first time reveals the name of the alleged E17 band member that was allegedly raped by their ex-band manager; that not only did I receive a ‘Spoof’ email from a chap who belongs to the Freemasons (link to blog) in an attempt to hack into my email account, - I have now discovered that this same video is not coming-up on YouTube’s internal search engine, that too is connected to Google’s.

It’s being what’s termed as “shadowed-banned” or “buried”.  There's many people who either don't believe that such shadow-banning exists, or know anything about it, or how it works.

Then there's others who say, '...it's not shadowed-banned because how else did I, and others see it?' That's a good question, and explain more below, but they're right, it's had over 500 views, not bad for a channels first ever upload, and with no followers.

So what the hell am I talking about?

Well the main reason others have been able to view it, is because I have been leaving direct links to the video on other comments and blogs.  Like what I'm doing again here, so will probably generate a few more views.

But, it was very unlikely you stumbled across the video itself were you to simply type "Brain Harvey" into the YouTube search-bar, as it's not appearing.  For a day or two it can be found under 'new’ uploads, though soon after it is filtered and begins to get buried in the search results.

"They", which seems to now include Brian Harvey himself, don't want this video to come-up on the YouTube searches, for it seems that "someone" at YouTube, which I very much doubt, - and more-like their algorithms set-to supress whatever videos "they" deem need to be supressed.

In this case and where this video clearly puts together from a compilation of Harvey's videos, the main evidence that he's long been saying he was going to expose in regards to the name of the band member he accuses his ex-band manager of raping, and despite this video confirming everything he’s been saying appears to be true, Harvey also seems keen to see it "buried".

I say this, as he soon I uploaded the video, Harvey then removed the two videos; The Bigger Picture, and Proof of Rape, and where I obtained the information and screenshots of when he clearly showed the name "Tony" in the email exchanges he had with convicted paedophile Johnathan King.

He also repeatedly played Jon Hendy's telephone conversations that seem to confirm Harvey is telling the truth when it comes to the alleged rape claims. 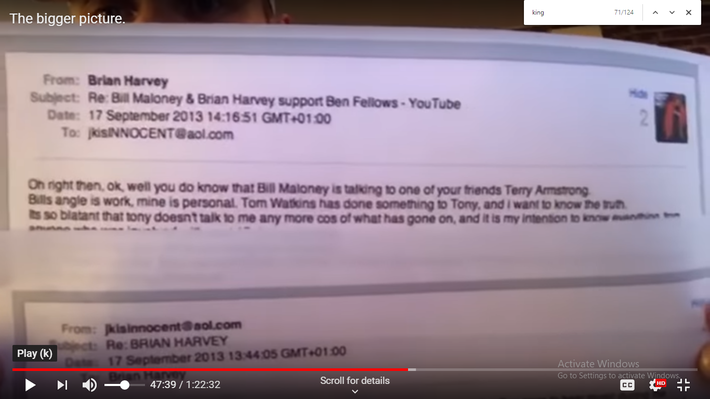 I think Brain Harvey showed the email by mistake, forgetting the name "Tony" was visible.  He's been saying for a long time that he'd have no other choice but to name the band member, but never has. He also explains why he hasn't, as he wants to protect some people from getting hurt.

I'm not here to take sides, yet see the truth of what's being said.  I write because I feel it's my social responsibility to help set the record straight. Of what I do know, Harvey has been shafted good and proper, that in a sense he probably feels he's been raped.  Because he's been well and truly fucked and had-over and probably will never get over it, or seek real justice.

If there are those out there who feel they have been exposed for the wrong reasons, they can take action.  If someone wants to take action against those Harvey may name, then it's up to the actual victim as opposed to anyone else to address this matter.

Though this blog is more to do with the 'shadow-banning' of the video in question.  It's the same on other social platforms, shadow-banning that is, and that even though your posts and comments will appear to be 'out there', they're not visible to others and sit stationary on your own profile.  It's not unless someone specifically visits your profile, that only then will they perhaps see your posts.

As even then, those posts could be hidden so even your family, friends or followers will not see your posts, and it’s only you who does. The Chinese, North Korea etc. are not just guilty of shadow-banning millions of search results, as all countries around the world are beginning to experience online censorship and quite like we've never known before. There are many individuals and companies specialising in the burying or removing of negative content from the internet.  According to one company named, ReputationManagement.com; 'Negative Google search results impact your legacy, career and company.  As a high net worth person, your individual online reputation could easily be overrun by negative information, a company scandal, or a false accusation that sweeps through the media. Contact our experts to learn more about our online reputation management services for individuals. At that level, you can’t afford to have negative search results on the first page of Google.'

So it's the likes of high-powered bankers, lawyers, corporates, publishers, music industry moguls, "celebrities" and intelligence agencies etc., including the military and police, who often use the same kind of techniques that companies such as ReputationManagement.com do.  Some articles and subject matter can embroil a whole range of companies and individuals who are all caught-up in the same web, and such as Brian Harvey's case does.

He's accusing, the police, media, especially Rupert Murdoch's empire, Tom Watkins, his ex-band manager, and to make things even more confusing, Tom Watkins MP, so that's always going to confuse online searches, thus the music-industry and political arenas are being implicated, alongside the "Hacking Scandal", Levenson Inquiry; that it's really no surprise that when an article or video does arises that can have a negative impact on these types of individuals or companies, that they're very soon supressed and deeply hidden in the search results.

Some are totally removed, though according to ReputationManagement.com; 'It’s incredibly difficult to completely remove negative content from Google search. In almost every case, the only viable approach is to bury negative search results in Google where people won’t find them.

So there you go, and in the instance of this latest video unless you search for the title verbatim (Brian Harvey - Drops Bombshell Raped Band Member Named!) on YouTube, and only write "Brian Harvey" into the search-bar, it will not appear and remains deeply hidden away.  Though this shouldn't be happening, as anyone else who just writes "Brian Harvey" will get a list of hundreds of related videos that all have "Brain Harvey" within their title or tags.  This means this video should also appear on this list, though doesn't.

It therefore seems to have been singled-out, "shadowed-banned" and deeply buried.

And don't get confused with previous watched or searched videos or articles you may have done, for even though it may appear in your current searches, that's due to your caches and were you to logout of your YouTube account, and then try and search as "non logged-in visitor", the video will no longer appear on your search results, and as said above, unless you searched for the title verbatim or almost as close to the title as can be, it simply will not show-up.

I've also got a few things to say about Google Maps, perhaps I'll do a blog about it; for like how the internet "used to be", Google Maps no longer give you the long range focus that it once did.  Instead, from a birds-eye view, it appears that we are viewing an animation, as opposed to the alleged satellite imagery that we once used to see.

Instead of it showing us crystal clear images, the trees, greenery, cars and house are almost like blurred watercolour-like images and it's not until you actually go for a "Google walk" that the images on the ground revert back to a clearer image.

So what's this false 'reality' all about?

Well to me, it's more like they want to more easily mask and disguise "sensitive" landmarks and places "they" don't what us to see, - as why else has Google Maps adopted such a inferior system that give us less clarity than how the "old" Google Maps used to be?

That's the way Chris, same here - saving things that I perhaps once wouldn't have bothered, as otherwise a lot of information is going to totally disappear.

Anticipating this, I've been burning a lot onto the flash drives. Got huge library now.

"James! Yeah man seen this video it's hilarious and fucking true!"
38 minutes ago

"Those gender reveal parties can be, uh, problematic."
3 hours ago

James Roberts replied to stormtruther's discussion MSNBC Anchor Says “N*ggers” Instead of “Lakers” While Reporting Kobe Bryant’s Death (VIDEO) "don't say nigger, don't say nigger, shit shit shit"
"If she meant to say "my niggers", would it have been OK?"
4 hours ago

"Yeah, that would make sense. Pseudoephedrine is somewhat easier to reduce into meth than normal…"
4 hours ago