The Assassination of Julius Caesar: A People's History of Ancient Rome

Michael Parenti claims that in most ancient and modern histories, Julius Caesar is characterized as a dictator[1] and demagogue.[2] If so, then Caesar's assassination can be portrayed as a defence of the Republic.[2] Also, that plebs or "the Roman commoners" are viewed "as a parasitic mob, a rabble interested only in bread and circuses."[3]

In contrast, Parenti argues that Caesar's assassination was "one incident in a line of political murders ... [of] popularly supported reformers."[4]Parenti also argues that, despite their traditional depiction as a lazy, criminal mob, the plebs largely consisted of hard-working laborers with practical political and economic concerns.

Parenti is critical of most of the ancient sources, except for Caesar's writings and those of his supporters. Parenti also says Sulla encouraged the growth of large estates in the Roman countryside (p. 79).

Parenti lists Caesar's measures to relieve poverty; some measures are outright grants to the poor but most are programs to put the plebs to productive work. Also, several measures are taken to curb corruption practices of the wealthy as well as to levy some luxury taxes. Then Parenti turns to debt relief and contrasts "two theories about why people fall deeply in debt."(p. 151)

The first says that persons burdened with high rents, extortionate taxes, and low income are often unable to earn enough or keep enough of what they earn. So they are forced to borrow on their future labor, hoping that things will take a favorable turn. But the interested parties who underpay, overchange, and overtax them today are just as relentless tomorrow. So debtors must borrow more, with an ever larger portion of their eanings going to interest payments ... eventually assumes ruinous proportions, forcing debtors to sell their small holdings and sometimes even themselves or their children into servitude. Such has been the plight of destitude populations through history even to this day. The creditor class is more that [sic] just a dependent variable in all this. Its monopolization of capital and labor markets, its squeeze on prices and wages, its gouging of rents are the very things that create penury and debt.(p. 151-152)

In the second theory, debtors are lazy and free spenders. However, Parenti states this model doesn't apply to the poor but rather to the spoiled children of the upper class:

who live in a grand style, cultivate the magical art of borrowing forever while paying back never, as did Caesar himself during his early career. Such seemingly limitless credit is more apt to be extended to persons of venerable heritage, since their career prospects are considered good. ... They treat fiscal temperance as tantamount to miserliness, and parade their profligacy as a generosity of spirit.(p.152)

In any case, Caesar's debt relief was aimed at "the laboring masses, not the dissolute few."(p. 153)

Julius Caesar was one of the greatest statesmen ever. After his brilliant conquest of Gaul his loyal army was willing to follow him on campaigns in Egypt, Pontus, Africa and Spain which made him master of the Roman world. 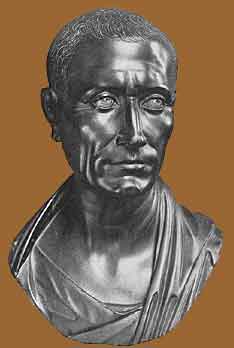 Granting himself dictatorial powers as the first de facto emperor he passed a flood of shrewd, sane measures which improved life for many at home and abroad. His Julian calendar survives to this day.

All the more reason to think outside the money system box.