With the convergence of Artificial Intelligence, Bio-Tech, and Nano technology man is faced with a one way proposition. Either man can regress and ignore the supposed advancements of technology or the human race can actually exercise restraint and study more in depth what the implications of racing headlong into an age of information that promises only uncertainty and possible implications that humans cannot easily co-exist with much less survive! Plunging into the unknown simply for profit and corporate expansion only leads to an awaiting catastrophe.

Time and time again whenever mankind has pushed ahead of the wisdom of analysis we have run into trip wires of downfall and potential massive failures that threaten to capsize the human race that forever haunts the future of human rights policies and governance! We can always count on opportunistic attacks on President Trump as he presents a major obstruction to the agenda of the left and their ultimate agenda, the plans of the Globalists!

Outgunned by our own creation

When Artificial intelligence can be immediately uploaded by every robot simultaneously in a phased array of spontaneously upgraded information unlike their human counterparts ask yourself who is growing and gaining power faster? Who is more likely to outthink and out maneuver the other opponent? Why as people marvel at these robot conventions and programmers are telling us so excitedly that they are giving the robots this capability and that and that their learning capacity is gaining geometrically, are we not teaching them values? If Robots are programmed to accomplish tasks faster and smarter than human beings what if they have no moral compass and their decisions are just a matter of relativity? What becomes the more efficient choice and who becomes expendable? Humans are bad enough at this formula already, but the problem is a ROBOT'S PROGRAMMER IS HUMAN! 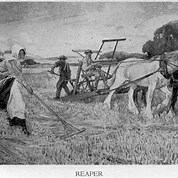 A small part of the greater whole

The question now becomes why is humanity like an ant colony? In an ant colony the hive mentality dictates that no member survives outside of the colony. All must participate as one or they will die! Worker ants, guardian ants, drones, and queens even the ants who look after the queen's egg nursery. Each has a specific task and cannot survive without being part of the whole colony!

We as humans were not created that way. Our primitive ancestors made their own clothes, foraged for their own food, hunted animals for protein, and planted their own vegetables. They knew how to escape carnivores or kill them. They managed to keep from being eaten at night. They had children without hospitals! They taught their young how to survive the same way! Men and women were independent, resourceful, and intelligent enough to adapt to their environment. They built their own dwellings and warmed themselves in the winters. Today we have a new civilization dependent on the colony of technology everything we need is bought and sold. We create nothing anymore! Now, more and more our species depends upon intelligent design and prefabricated accommodations along with food and shelter.

People are so dependent now on computers, cell phones, software, and e-commerce! We have become as ants in a colony unable to fend for ourselves. What if that colony goes insane? What if the Queen becomes corrupt, suicidal, or diseased? Even our world view is no longer shaped by directly reported and objective news. Instead, others decided what we should think and perceive. It's not up to us anymore. Multinational corporations influence government, news coverage, opinion, entertainment, and our views that they want to control. The upcoming 2020 Presidential election could actually be decided by social media tilting the voting through electronic fraud! Twitter, Face Book, Google, and You Tube all sampling our preferences deciding our best choices, anticipating what we want. They can influence the uninformed and impressionable to a predetermined outcome. Expunging negative news that does not suit the Chinese, radical left, radical Islam, or the Democrats according to politically correct guidelines! You are now part of the human ant colony!

Mr. Sizzle commented on Aaron's blog post Never Relent – Why Did The DOJ Release SSCI Vice-Chairman Mark Warner’s Text Messages on February 9, 2017?…
"All that is meaningless once you realize it’s ALL theater and nothing changes for the good.…"
13 hours ago

"@Doc Vega “James, Buddy I'm not too sure I would have ever recommended the Fuehrer for a…"
14 hours ago

"If were not careful we will wind up like the Indians, that looks like the globalist plan"
23 hours ago