The Road to the Nuremberg Trials - DOES HISTORY REPEAT ITSELF?

Held for the purpose of bringing Nazi war criminals to justice, the Nuremberg trials were a series of 13 trials carried out in Nuremberg, Germany, between 1945 and 1949. The defendants, who included Nazi Party officials and high-ranking military officers along with German industrialists, lawyers and doctors, were indicted on such charges as crimes against peace and crimes against humanity. Nazi leader Adolf Hitler (1889-1945) committed suicide and was never brought to trial.

Although the legal justifications for the trials and their procedural innovations were controversial at the time, the Nuremberg trials are now regarded as a milestone toward the establishment of a permanent international court, and an important precedent for dealing with later instances of genocide and other crimes against humanity. 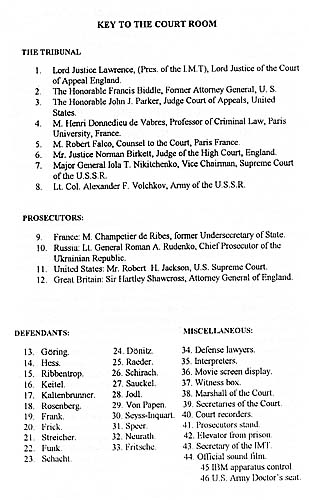 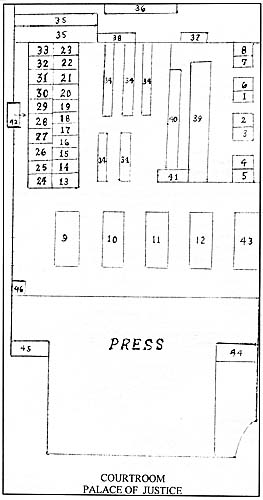 Courtroom Diagram and Legend
Diagram and Text from Martin, Inside Nurnberg p. 12-13

Shortly after Adolf Hitler came to power as chancellor of Germany in 1933, he and his Nazi government began implementing policies designed
to persecute German-Jewish people and other perceived enemies of the
Nazi state. Over the next decade, these policies grew increasingly
repressive and violent and resulted, by the end of World War II
(1939-45), in the systematic, state-sponsored murder of some 6 million
European Jews (along with an estimated 4 million to 6 million non-Jews).

In December 1942, the Allied leaders of Great Britain, the United States and the Soviet Union "issued the first joint declaration
officially noting the mass murder of European Jewry and resolving to
prosecute those responsible for violence against civilian populations,"
according to the United States Holocaust Memorial Museum (USHMM).
Joseph Stalin (1878-1953), the Soviet leader, initially proposed the
execution of 50,000 to 100,000 German staff officers. British Prime
Minister Winston Churchill (1874-1965) discussed the possibility of
summary execution (execution without a trial) of high-ranking Nazis,
but was persuaded by American leaders that a criminal trial would be
more effective. Among other advantages, criminal proceedings would
require documentation of the crimes charged against the defendants and
prevent later accusations that the defendants had been condemned
without evidence.

There were many legal and procedural difficulties to overcome in setting up the Nuremberg trials. First, there was no precedent for an
international trial of war criminals. There were earlier instances of
prosecution for war crimes, such as the execution of Confederate army
officer Henry Wirz (1823-65) for his maltreatment of Union prisoners of
war during the American Civil War (1861-65); and the courts-martial
held by Turkey in 1919-20 to punish those responsible for the Armenian
genocide of 1915-16. However, these were trials conducted according to
the laws of a single nation rather than, as in the case of the
Nuremberg trials, a group of four powers (France, Britain, the Soviet
Union and the U.S.) with different legal traditions and practices.

The Allies eventually established the laws and procedures for the Nuremberg trials with the London Charter of the International Military
Tribunal (IMT), issued on August 8, 1945. Among other things, the
charter defined three categories of crimes: crimes against peace
(including planning, preparing, starting or waging wars of aggression
or wars in violation of international agreements), war crimes
(including violations of customs or laws of war, including improper
treatment of civilians and prisoners of war) and crimes against
humanity (including murder, enslavement or deportation of civilians or
persecution on political, religious or racial grounds). It was
determined that civilian officials as well as military officers could
be accused of war crimes.

The city of Nuremberg (also known as Nurnberg) in the German state of Bavaria was selected as the location for the trials because its
Palace of Justice was relatively undamaged by the war and included a
large prison area. Additionally, Nuremberg had been the site of annual
Nazi propaganda rallies; holding the postwar trials there marked the
symbolic end of Hitler's government, the Third Reich.

The best-known of the Nuremberg trials was the Trial of Major War
Criminals, held from November 20, 1945, to October 1, 1946. The format
of the trial was a mix of legal traditions: There were prosecutors and
defense attorneys according to British and American law, but the
decisions and sentences were imposed by a tribunal (panel of judges)
rather than a single judge and a jury. The chief American prosecutor
was Robert H. Jackson (1892-1954), an associate justice of the U.S.
Supreme Court. Each of the four Allied powers supplied two judges--a
main judge and an alternate.

Twenty-four individuals were indicted, along with six Nazi organizations determined to be criminal (such as the "Gestapo," or
secret state police). One of the indicted men was deemed medically
unfit to stand trial, while a second man killed himself before the
trial began. Hitler and two of his top associates, Heinrich Himmler
(1900-45) and Joseph Goebbels (1897-45), had each committed suicide in
the spring of 1945 before they could be brought to trial. The
defendants were allowed to choose their own lawyers, and the most
common defense strategy was that the crimes defined in the London
Charter were examples of ex post facto law; that is, they were laws
that criminalized actions committed before the laws were drafted.
Another defense was that the trial was a form of victor's justice--the
Allies were applying a harsh standard to crimes committed by Germans
and leniency to crimes committed by their own soldiers.

As the accused men and judges spoke four different languages, the trial saw the introduction of a technological innovation taken for
granted today: instantaneous translation. IBM provided the technology
and recruited men and women from international telephone exchanges to
provide on-the-spot translations through headphones in English, French,
German and Russian.

In the end, the international tribunal found all but three of the defendants guilty. Twelve were sentenced to death, one in absentia, and
the rest were given prison sentences ranging from 10 years to life
behind bars. Ten of the condemned were executed by hanging on October
16, 1946. Hermann Göring (1893-1946), Hitler's designated successor and
head of the "Luftwaffe" (German air force), committed suicide the night
before his execution with a cyanide capsule he had hidden in a jar of
skin medication.

Following the Trial of Major War Criminals, there were 12 additional trials held
at Nuremberg. These proceedings, lasting from December 1946 to April
1949, are grouped together as the Subsequent Nuremberg Proceedings.
They differed from the first trial in that they were conducted before
U.S. military tribunals rather than the international tribunal that
decided the fate of the major Nazi leaders. The reason for the change
was that growing differences among the four Allied powers had made
other joint trials impossible. The subsequent trials were held in the
same location at the Palace of Justice in Nuremberg.

These proceedings included the Doctors Trial (December 9, 1946-August 20, 1947), in which 23 defendants were accused of crimes
against humanity, including medical experiments on prisoners of war. In
the Judges Trial (March 5-December 4, 1947), 16 lawyers and judges were
charged with furthering the Nazi plan for racial purity by implementing
the eugenics laws of the Third Reich. Other subsequent trials dealt
with German industrialists accused of using slave labor and plundering
occupied countries; high-ranking army officers accused of atrocities
against prisoners of war; and SS officers accused of violence against
concentration camp inmates. Of the 185 people indicted in the
subsequent Nuremberg trials, 12 defendants received death sentences, 8
others were given life in prison and an additional 77 people received
prison terms of varying lengths, according to the USHMM. Authorities
later reduced a number of the sentences.

The Nuremberg trials were controversial even among those who wanted the
major criminals punished. Harlan Stone (1872-1946), chief justice of
the U.S. Supreme Court at the time, described the proceedings as a
"sanctimonious fraud" and a "high-grade lynching party." William O.
Douglas (1898-1980), then an associate U.S. Supreme Court justice, said
the Allies "substituted power for principle" at Nuremberg.

Nonetheless, most observers considered the trials a step forward for the establishment of international law. The findings at Nuremberg led
directly to the United Nations Genocide Convention (1948) and Universal
Declaration of Human Rights (1948), as well as the Geneva Convention on
the Laws and Customs of War (1949). In addition, the International
Military Tribunal supplied a useful precedent for the trials of
Japanese war criminals in Tokyo (1946-48); the 1961 trial of Nazi
leader Adolf Eichmann (1906-62); and the establishment of tribunals for
war crimes committed in the former Yugoslavia (1993) and in Rwanda
(1994).

The death sentences imposed in October 1946 were carried out by Master Sergeant John C. Woods (1903-50), who told a reporter from Time
magazine that he was proud of his work. "The way I look at this hanging
job, somebody has to do it . . . ten men in 103 minutes. That's fast
work."

Comment:
DOES HISTORY REPEAT ITSELF?
just for kicks and some names to remember

Don't miss this upbeat, informative and hilarious show about the NWO:

My New Vid Series: SNARK of the WEEK

Nurenberg was a front for Paperclip all the really smart Nazis got out and got rewarded by the military industrial complex by going to Amerika England and  the USSR.

....and it will with the forthcoming Nine-eleven-burg trials!!!

"I don't think that is possible JR. The left is too far gone to even begin to consider any…"
47 minutes ago

"A quote from new wave doctor : " If germ theory was real, we wouldn't be alive to believe…"
1 hour ago

cheeki kea commented on Chris of the family Masters's blog post What Mandatory Vaccination and the 5G Rollout Have in Common
"Ha ha, at the moment all is not lost Yet. Vaccines have not arrived, and while BLM eliminate…"
2 hours ago

"Virus has no nuclei, doesn't respire, doesn't excrete, so by definition is dead."
5 hours ago

"How dead thing can have a gene variation?"
9 hours ago

"Glenn Greenwald, by the way, has been invited on Tucker Carlson in the past, and accepted the…"
13 hours ago