"On August 19, 1953, the military, backed by street protests organized and financed by the CIA, overthrew Mossadeq. The Shah quickly returned to take power and, as thanks for the American help, signed over 40 percent of Iran’s oil fields to U.S. companies." 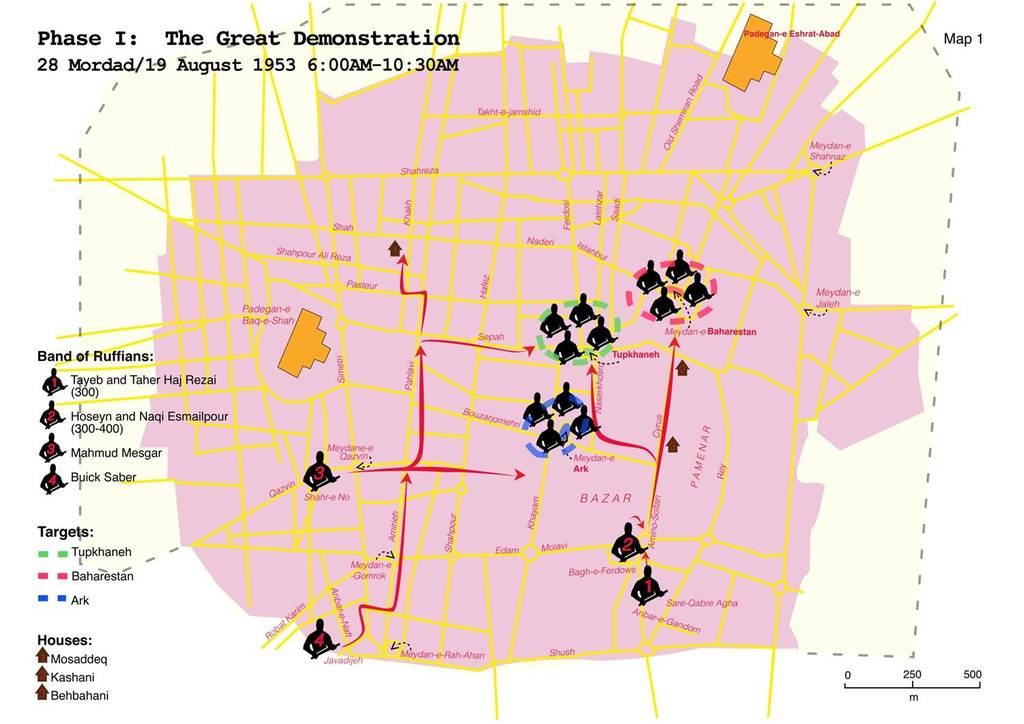 This map shows the disposition of bands of "ruffians," paid to demonstrate by coup organizers, early on August 19, 1953. The bands gathered in the bazaar and other sections of southern Tehran, then moved north through the capital. Thug leaders' names appear at left, along with the estimated size of their groups, and their targets. (Courtesy of Ali Rahnema, author of the forthcoming Thugs, Turn-coats, Soldiers, Spooks: Anatomy of Overthrowing Mosaddeq in Four Days.)

Mosaddeq came to prominence in Iran in 1951 when he was appointed premier. A fierce nationalist, Mosaddeq immediately began attacks on British oil companies operating in his country, calling for expropriation and nationalization of the oil fields. His actions brought him into conflict with the pro-Western elites of Iran and the Shah, Mohammed Reza Pahlevi. Indeed, the Shah dismissed Mossadeq in mid-1952, but massive public riots condemning the action forced the Shah to reinstate Mossadeq a short time later. U.S. officials watched events in Iran with growing suspicion. British intelligence sources, working with the American Central Intelligence Agency (CIA), came to the conclusion that Mossadeq had communist leanings and would move Iran into the Soviet orbit if allowed to stay in power. Working with Shah, the CIA and British intelligence began to engineer a plot to overthrow Mossadeq. The Iranian premier, however, got wind of the plan and called his supporters to take to the streets in protest. At this point, the Shah left the country for “medical reasons.” While British intelligence backed away from the debacle, the CIA continued its covert operations in Iran. Working with pro-Shah forces and, most importantly, the Iranian military, the CIA cajoled, threatened, and bribed its way into influence and helped to organize another coup attempt against Mossadeq. On August 19, 1953, the military, backed by street protests organized and financed by the CIA, overthrew Mossadeq. The Shah quickly returned to take power and, as thanks for the American help, signed over 40 percent of Iran’s oil fields to U.S. companies.

Mossadeq was arrested, served three years in prison, and died under house arrest in 1967. The Shah became one of America’s most trusted Cold War allies, and U.S. economic and military aid poured into Iran during the 1950s, 1960s, and 1970s. In 1978, however, anti-Shah and anti-American protests broke out in Iran and the Shah was toppled from power in 1979. Angry militants seized the U.S. embassy and held the American staff hostage until January 1981. Nationalism, not communism, proved to be the most serious threat to U.S. power in Iran.  https://www.history.com/this-day-in-history/cia-assisted-coup-overt...

"Kinzer is at his journalistic best when—drawing on published sources, declassified documents, interviews, and a bootleg copy of a secret Agency history of the operation9—he reconstructs the day-to-day running of TPAJAX. The plan comprised propaganda, provocations, demonstrations, and bribery, and employed agents of influence, "false flag" operatives, dissident military leaders, and paid protestors. The measure of success seemed easy enough to gauge—"[a]ll that really mattered was that Tehran be in turmoil," writes Kinzer. The design, which looked good on paper, failed on its first try, however, and succeeded largely through happenstance and Roosevelt's nimble improvisations. No matter how meticulously scripted a covert action may be, the "fog of war" affects it as readily as military forces on a battlefield. Roosevelt may have known that already—he and his confreres chose as the project's unofficial anthem a song from the musical Guys and Dolls: "Luck Be a Lady Tonight."

Years of Autocratic Rule by the Shah Threw Iran Into Turbulence 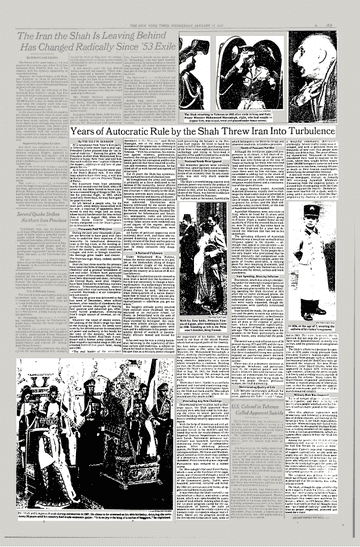 During the past year thousands of people are believed to have paid with their lives to underline their rejection of the monarchy. In tumultuous demonstrations in the big cities, in the winding alleys of the many bazaars, on campuses across the country, in small towns and villages, and even in foreign countries, the message grew louder and clearer: The Shah has to go. Many, indeed, said he had to die.

Over the last three months the protests have taken the form of mounting civil disobedience and a gradual breakdown of law and order. Strikers have paralyzed every aspect of the economy. Many banks have been destroyed and most, including the Central Bank, were shut. Imports have been blocked by rebellious customs officials. Telecommunications, electric power and other vital services have been curtailed. Railroads 2 td air transportation are erratic.

“With his atrocities, his repression against students, professionals, workers, the clergy and all factions of our people, and by his corruption and his economic policies that have resulted in inflation and economic deterioration, he has filled all of us with hatred and opened all of our eyes.”    https://www.nytimes.com/1979/01/17/archives/years-of-autocratic-rul... 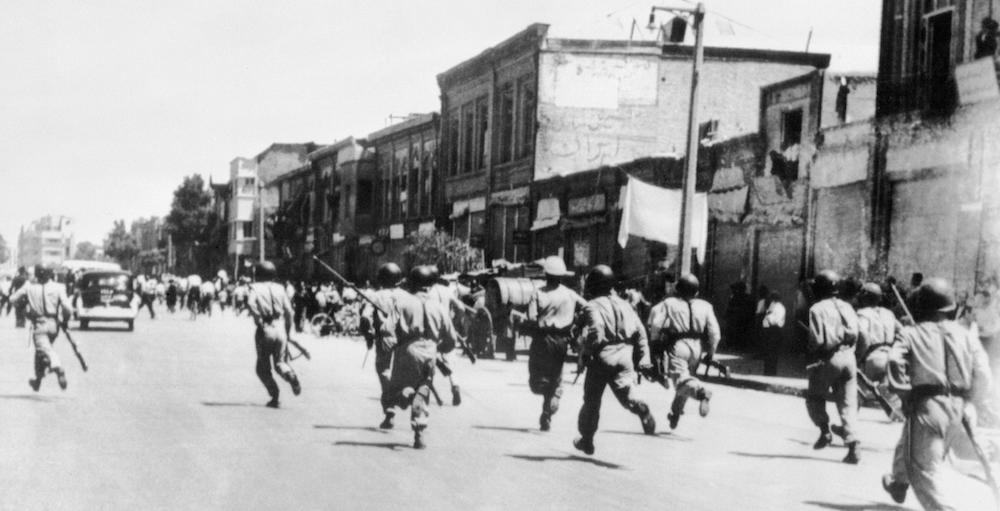 Persian soldiers chase rioters during civil unrest in Tehran, August 1953. On August 19, 1953, democratically-elected Iranian Prime Minister Mohammad Mossadegh was overthrown in a coup orchestrated by the CIA and British intelligence, after having nationalized the oil industry. The Shah Mohammad Reza Pahlavi was re-installed in the primary position of power. Massive protests broke out across the nation, leaving almost 300 dead in firefights in the streets of Tehran. (Photo credit should read /AFP/Getty Images) 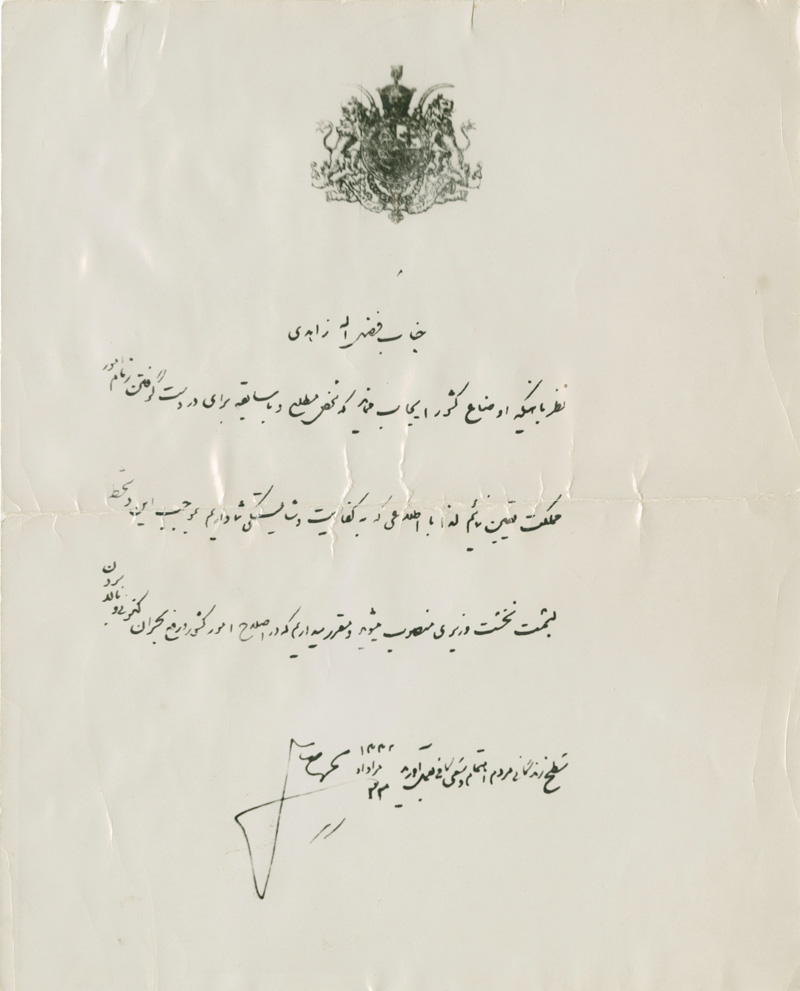 The Shah's order (known as a firman) naming Zahedi the new prime minister. Coup operatives made copies of the document and circulated it around Tehran to help regenerate momentum following the collapse of the original plan. (National Security Archive collections)

Known as Operation Ajax, the CIA plot was ultimately about oil. Western firms had for decades controlled the region’s oil wealth, whether Arabian-American Oil Company in Saudi Arabia, or the Anglo-Iranian Oil Company in Iran. When the U.S. firm in Saudi Arabia bowed to pressure in late 1950 and agreed to share oil revenues evenly with Riyadh, the British concession in Iran came under intense pressure to follow suit. But London adamantly refused.

The archived CIA documents include a draft internal history of the coup titled "Campaign to install a pro-western government in Iran", which defines the objective of the campaign as "through legal, or quasi-legal, methods to effect the fall of the Mosaddeq government; and to replace it with a pro-western government under the Shah's leadership with Zahedi as its prime minister".

The U.S. engineered a coup, with Britains help, to put their lackey, the Shah, back in power. They destabilized, killed, spread propaganda, pulled false flags, paid protesters to act as dissenters, created pure chaos....all for oil and greed.

The Shah sold out his own people, sharing 40% of the country's oil with American oil companies.

They had all they would tolerate of his treasonous tyranny and ran him out of the country into exile.

" This is blatant elder abuse and age discrimination. A similar situation happened here where a…"
1 hour ago

This has to be this biggest F U in history. Stand up america it's way past time.Steve…See More
1 hour ago
0 Comments 0 Favorites

"Great educational leaders back in the day to had an understanding of what a soul was, and went out…"
2 hours ago

Elderly people are being subjected to genocidal torture locked in care homes and not legally allowed to go out, or have a visit, be hugged by, or to hold the...
2 hours ago
1 Comment 0 Favorites

"So that's their party policy, to end their violence if they win the election. I think anyone…"
3 hours ago

"I lost respect for Ben Shapiro when he complained about Trump firing the War Hawk, John Bolton."
4 hours ago

"Too bad more people don't understand what he is saying!"
4 hours ago

Central Scrutinizer commented on Phyllis Maka's blog post Jim Stone: this was not a broadcast glitch, Pelosi actually glitched like that in real life. WTH is going on???
5 hours ago