The Why of Why America don't revolt gainst it's Corporate Elite Masters !

While most Americans are overwhelmingly sitting back and accepting the "necessity" of massive budget cuts and mass layoffs that will inevitably make the economic crisis in the United States a lot worse that it is in now, the rest of the world revolt against the Elites and cry for social and true economic justice .

In the last 3 years we have witness the emergence of a national rebellion in Spain, where a day-long strike protested a 5 percent pay cut across the board directed against public sector teachers, firefighters, hospital workers, and other local government positions. The protest  that been happening in Spain are truly massive, with an estimated of 75 to 80 percent of it's public workers and more than 3.5 million people taking part across the whole nation at a time when national unemployment  is over 20 percent (with a total unemployment of over 4 million people reaching 40 percent of the population.

In the case of Greece, one in five of it's citizens live now below the poverty line, and the situation is certain to get worse as proposed austerity measures - including tax hikes, pay cuts, and pension freezes - are undertaken by it's government.  Since 2010 , the people of Greece had engaged in a half dozen strikes in open defiance  against the riot police forces of the government as the Spaniards have done , forcing a shutdown of public transportation and closing down schools, courts, hospitals, and newspapers. The protests galvanized tens of thousands to turn out in cities across the country, prompting chants of "hands off our pensions" in opposition to draconian cuts directed against the country's working class.

In the United Kingdom, students, staff, and faculty across 100 universities came together to organize on-campus protests in June of 2011 to resist planned government layoffs, salary cuts, and reductions in courses. The British public was not fooled over the incremental nature of the cuts, which will be implemented over a number of years, but will affect three-quarters of the country's schools. The cuts are quite significant in scale - approximately 200 million pounds (or $300 million in U.S. dollars) across the whole island nation.

Many will wonder, why is there so much activism throughout the rest of the world, but comparatively much less in the United States ? Part of the explanation in the cases of the resistance in Greece, Spain, Mozambique, South Africa, France, Ireland, the UK, Italy, Canada, Eastern Europe and Bangladesh is the fact that workers in those countries are comparatively much worse off than Americans when it comes to deteriorating pay, benefits, and other worker protections. Unemployment levels are often much higher than in the U.S., while pay levels have long been comparative lower. This explanation, however, is partial at best.

The U.K. is characterized in many ways by a relatively stronger social welfare state (especially in relation to health care) than the one seen in the U.S, and less extreme conditions. Yet, British public sector workers are far more organized and intolerant of the gutting of public education.

In contrast, American protests against far larger austerity measures (in the form of massive layoffs and  serious pension cuts) are being met by scattered local protests at best. No salient national campaign is emerging across localities in the well advertise land of the free and the brave , nor does it appear that one is on the horizon in the near future.

The relatively stronger position of labor unions throughout Western Europe also doesn't fully explain the weak level of protests in the U.S. Most of the strikes and protests discussed above were led by public sector workers, an area of the U.S. economy that has traditionally been characterized by strong unionization and organization. While only 7.2 percent of U.S. private sector workers are part of a union.

One possible explanation about why most Americans don't massively protest  against it's Elected Officials may be that Americans are the most incessantly massive bombarded corporate media propaganda people in the whole world.

The American mainstream media is directed toward trendy and fashionable consumption and meaningless celebrity news, Sports, movies and TV shows rather than toward important political, social  and economic issues, such as whether Americans will have a job tomorrow as a result of massive budget cuts and a weakening economy.

Another fact is that the American educational institutions do a very hardcore pitiful job in informing the young about the political reality and History of it's country, the world,  so the importance of social movements in bringing about positive social change that will benefit everyone to a better future as a nation, and finally, the structural changes in it's economy force Americans to work longer hours for less pay, leaving less time for political awareness, education, social and polital activism.

All of these forces come together to wreak havoc on the prospects for renewed progressive activism among the American public in general. Progressive change is further hindered by the emergence of social movements" like the Tea Party and it's counterpart the Occupy Wall street movement. In the case of the Tea Party movement, this one been largely media-induced, manipulated and fueled mostly by right-wing Republicans extremist and it's very own bit of Neo Nazi race-hate-baiting against it's traditional scapegoats and usual suspects ( minorities, Illegal Immigrants etc ) and specially the Muslim community living in the US as it's main target.

Contrary to the Tea Party movement, The Occupy Wall Street Movement came to be on sept 17 2011 inspired in part by the Arab Spring revolution in which the people of Tunisia, Algeria, Egypt among other nations in North Africa  took to the streets and seized control of their countries, that were ruled at the time by dictators supported for decades by the United States Government, (except in the case of Libya, where a US/NATO suspected Intelligence supported Terrorist Organization accuse of been responsible for the 911 attacks on September 11 of 2001 and known as Alqueda  took over that country after murdering it's Ruler, Colonel Muadar El Gadafi with US and NATO military air support .)

The Occupy movement openly declared itself as a response to the mean spirited and greedy plutocrats who not only control the outcome of the electoral process by fraud and corruption In the United States, but to held them accountable for the illegal and criminal activities that been contributing so hard to the present  economic crisis that been and keep affecting the working and middle class people of America today.

But for doing so, The Occupy movement became the perfect object of hate for right wing and Republican oriented individuals who falsely accuse them of been a communists or left wing movement Organization. And sadly the movements clear message of social and equal justice was distorted by the mainstream corporate media as well, making most of the politically unaware and celebrity obsess average simple minded American to perceive them as a socialist, left wing communist movement and to rejects them and label them as such.

Until we begin to address the structural problems that plague our modern American society at all levels, we will see little progress in organizing the masses to oppose the reactionary abusive assault of the 1% Elites on the99% of the American people no matter what political affiliation they may have, so on every freedom loving soul around this world.

Without any action, there will be little support for real economic prosperity and equal justice not only for all Americans but for the whole world as well . And is time that all Americans wake up and realize that the only way to save the Once Land of the Brave and the Free is by a direct confrontation with the political and economic Elitist that have taken control of this nation among many others, and that are the ones dividing the people, creating all the wars that we are witnessing around the world, and destroying America at the same time from the inside out for their own selfish benefits, Greed and blind ambition. If we want to save America, not only for us but for our children and their children's children we all must unite, reclaim and take back our constitutional rights and have the courage to face the Elite enemy by force if necessary as the founding fathers of this great nation did it in the pass. This is not only our right  but as True Freedom Loving Americans, our duty.

Live Free or Die America http://www.youtube.com/watch?v=B1T8xgHdMEM! The time is Now ! WAKE UP ! 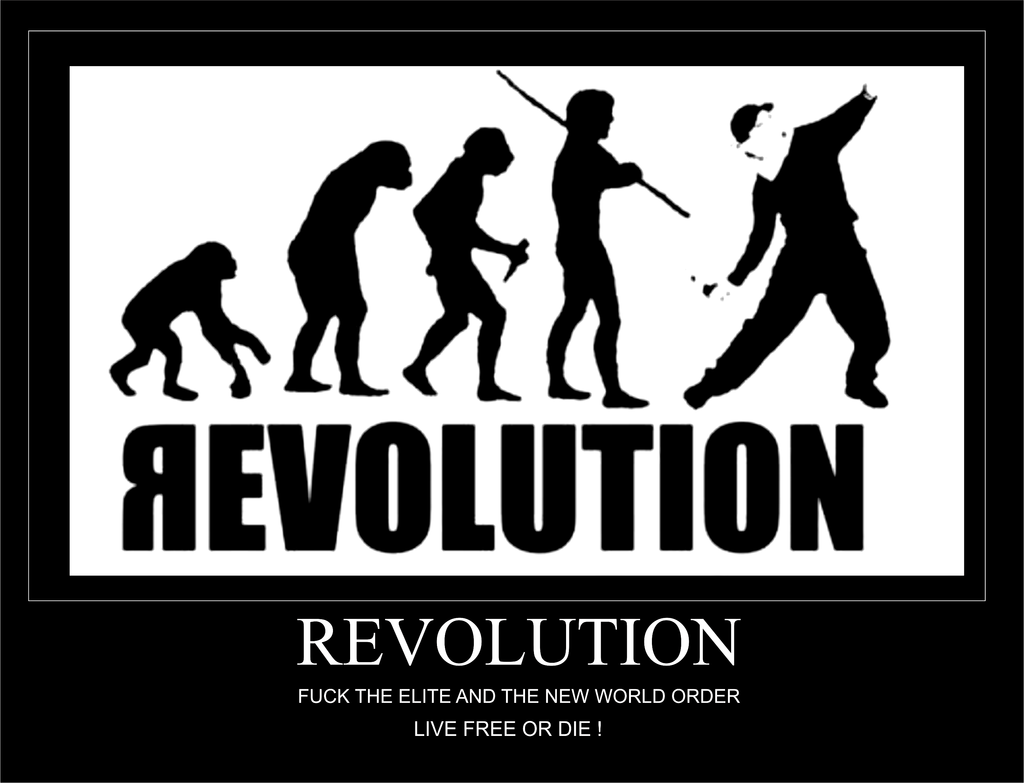 i want to see the Resist&DESTROY!! the NWO rallies everywhere!

COVERS EVERYTHING!!!.. like to see George soros money back a resist the NWO crowd how about some of those hollywood peeps back RESIST&DESTROY THE NWO...  Its what i am waiting for ..  id like to see posters like this...   >

RESIST AND DESTROY THE NEW WORLD ORDER ! RESTORE THE CONSTITUTION OF THE UNITED STATES OF AMERICA !

"yeah, NFL also sucking, it's like you're watching a forced farce, players just going…"
35 minutes ago

"Kneeling down to anyone other than God could be part of a sacrifice ritual."
1 hour ago

"French Open tennis is a farce this year. Hardly any spectators, Players touch the rackets - no…"
2 hours ago

"One with no mask, five with no brain."
2 hours ago

Now here's a movement I can get behind

Now here's a movement I can get behind

Chris of the family Masters commented on Larry Flinchpaugh's photo