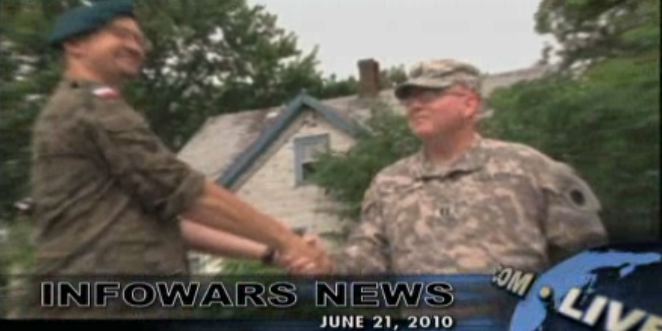 We are the Policja, we are here to help

Language no problem for Illinois Guard troops training with Poles

According to Capt. Krispa Jekielek, a logistics officer with the Guard, many of the U.S. soldiers exercising in Poland this month are fluent in Polish.

“The unique thing about this is that Poland is our partnership country for the state of Illinois. We have a lot of soldiers in the National Guard who are of Polish descent,” she said, adding that many are dual citizens acting as translators during the exercise.

A company-sized task force based around 1st Battalion 178th Infantry Regiment, Illinois National Guard is part of a contingent of almost 300 U.S. personnel participating in the training.

“I’m trying to find out more about my ancestry while I’m here and learn as much Polish as possible,” said Jekielek, whose great-grandfather went to the United States from Poland long before she was born.

U.S. troops in the exercise will have a chance to check out Polish culture during a visit to the small town of Wedrzyn after the training wraps up on Sunday, she said.

Lt. Col. Sean Mulcahey, deputy exercise director, said other U.S. personnel in the exercise are from across Germany and Italy. They are training with about 1,700 Polish personnel, including 1,100 who are preparing to deploy to Afghanistan in the next few months.

The training of the Afghan- bound troops is called Bagram II and it is being run in conjunction with Immediate Response, he said.

The goals of Immediate Response include training U.S. and Polish forces to work as a coalition and to build on experience accumulated from working together in Iraq and Afghanistan, Mulcahey said.

In Bagram II, the Illinois National Guardsmen are training under the command of a Polish battalion, he said.

“The Polish battalion will have command and control of a different U.S. company when it arrives in Afghanistan,” he added.

Immediate Response is a priority exercise for the U.S. Army Europe as part of a program to engage with countries in the U.S. European Command’s area of responsibility, Mulcahey said.

“The Polish forces have worked very hard and are very interested in continuing the development of the relationship between our countries,” he said. “The exercise to this point has already improved our ability to work with them.”

It’s one thing to claim that a man can “identify” as a woman or vice versa. Increasingly we see a…See More
41 minutes ago
0 Comments 0 Favorites

Less Prone commented on Chris of the family Masters's blog post The Sport Mad World
"Grown-up men waste their time energy in following games. Otherwise they could direct that it…"
48 minutes ago