The left photo shows the damage the USS John S. McCain suffered from as it limped into Changi Naval Base in Singapore on the 21/8/17 after an alleged collision with a merchant vessel near the Straits of Malacca. It's the second collision involving a naval warship and the ship saw flooding of machinery, communications, and—as was the case in June's accident involving the USS Fitzgerald—crew sleeping quarters.

We must question, how was it possible to make such an inward impact and so low on the side of the vessel? It's almost like some kind of torpedo damage.

The photo on the right show the torpedo damage to the SS Corilla.  On 2 February 1942, the SS Corilla had caught up with several independent ships behind the convoy, when lookouts spotted U-751. The Corilla sent out SOS distress signals, started to zigzag and fired one shot from the 4" gun, which fell some 200 metres short as reported by the U-boat.  At 07.46 hours, U-751 reached a favourable position and fired three torpedoes, one of which struck just forward of the bridge.  The ship kept manoeuvering and when an escort vessel from the convoy appeared on the scene, Bigalk decided to leave.  At 21.20 hours on 3 February, the Corilla reached Halifax and later returned to service after being repaired. None of the 63 crew members and one passenger on board were injured or killed.

The photo below shows the kind of damage you can expect to see when a tanker was to hit another vessel side-on.  It same would apply were it head-on or from the rear of the ships - the height of the of the oil tanker will cause damage high-up to whatever large vessel it hit and not incur the kind of underneath damage we can clearly see on the USS John S. McCain. 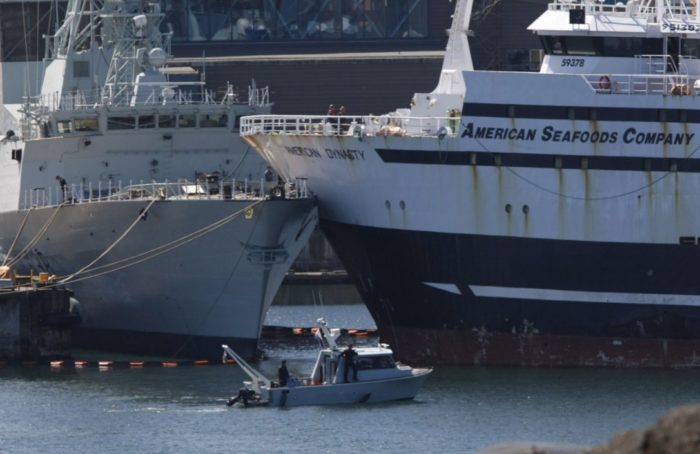 The video below shows you damage to the Fitzgerald - and you can clearly see damage was made high-up, however, I think this was deliberately caused to mask the real damage the Fitzgerald suffered.  In the video, you can see the patch that was wielded well below the plimsoll line.  The narrator explains how underwater teams spent months patching-up the damage.

Is it not easier to say this was an accident, as opposed to admit there has been some kind of missile or torpedo strike?  I think attacks are taking place and being covered-up on all sides and it is each countries military playing games with each other - in this cat and mouse game that has been taking place in the China seas for some years now.

WWIII is on the cards - and will take place involving wars all over the globe and no different than the other two world wars.  It's now just a matter of time and very likely all of us alive today - will sadly have to endure and witness this total madness.

So the ship was named according to songbird John McCain's father and grandfather. The dick head is dragging down both of them.

Less Prone favorited Chris of the family Masters's blog post Crime Is About To Commence.
41 minutes ago