Europe is facing an insurgency no different from what's happening in Iraq -- just not fully violent yet.

Norwegian blogger Fjordman writes, "As Mark Steyn points out, the Jihad in the streets of France looks increasingly like the early skirmishes of an impending Eurabian civil war, brought on by massive Muslim immigration and multicultural stupidity. And it is by no means limited to France. Law and order is slowly breaking down in major and even minor cities across the European continent, and the streets are ruled by aggressive gangs of Muslim youngsters. Countries such as France, Holland and Sweden could soon reach a point where the Muslim population will create something akin to civil war, as it already has in the above mentioned nations. Even though this conflict may start out as civil wars in a handful of countries, it could spiral out of control and spread too much of the continent, dragging in foreign fighters from the Arab world."

This civil war between Europeans and Muslim immigrants who have had success of imposing their kind of civilization on Europe is the result, Fjordman says "of today's decadent, bored, post-religious and post-nationalist Europe that is no match for Islam, unless it rediscovers a belief in its own culture and a will to defend it. If not, the end result will either be Eurabia or a Pakistanization of Europe, the way we have already seen for generations in the Balkans." The Pakistanization of Europe is one such scenario he sees for Europe.

"Muslims aren't numerous enough to control the entire continent. In the event of war, there will be mutual ethnic cleansing and Muslims will seize parts of Western Europe. For instance, a belt stretching from parts of Germany via Belgium and Holland to France, but maybe even regions within certain nation states. All of Europe will not be lost, but some parts will, and many others will be deeply damaged by the fighting. Many of our cultural treasures will burn. How things will go from there is difficult to predict. Perhaps this new "Pakistan" in the heart of Europe will be the source of constant instability and the staging ground for Jihad incursions into infidel areas, just as Pakistan is to India now."

Fjordman believes that the spark for the civil war many happen in one of two ways.

"It will start, as these things always do, before anyone is ready. It may start more or less by accident. This war may begin with the murder of a symbolic but politically unimportant figure. Or a reverse scenario is possible. A nationalist or rightist murders a prominent Islamic figure, sparking a wave of Islamic terror across Europe. Another possibility is a mega-attack, a chemical weapon or simply a massive suicide bomb or wave of bombs that succeed beyond the bombers plans and kills thousands and/or destroys symbolically important targets, a cathedral, a museum, the Channel. The fearful public then demands harsh government action. Some governments act; others are paralyzed and are incapable of taking action causing citizens to defend themselves."

In other words -- chaos and civil insurrection against the feeble social liberal multiculturalists who are unable to respond to the attacks as they do today. Fjordman speaks of the real danger of this.
http://fjordman.blogspot.hu/2005/11/second-fall-of-rome.html

TRANSCRIPT OF THE STORY OF THE LEBANESE LADY

THOSE WHO CANNOT LEARN FROM THE HISTORY ARE BOUND TO REPEAT IT.

According to Barbara you have to destroy Europe so that it can "survive". But she is not talking about survival of the original Europeans, quite the contrary. It's neither the terrorist immigrants, who aspire to become the future kings of the hill, that will survive in the final Talmudic NWO. This all will have a very ugly end.

It seems that destruction of Lebanon by hostile immigrants was a prototype of a new way of war now in Europe and the U.S. All going according to plans of Richard Coudenhove Kalergi, one of the early founders for the European Union (The New Soviet Union). ---> European Civil War. 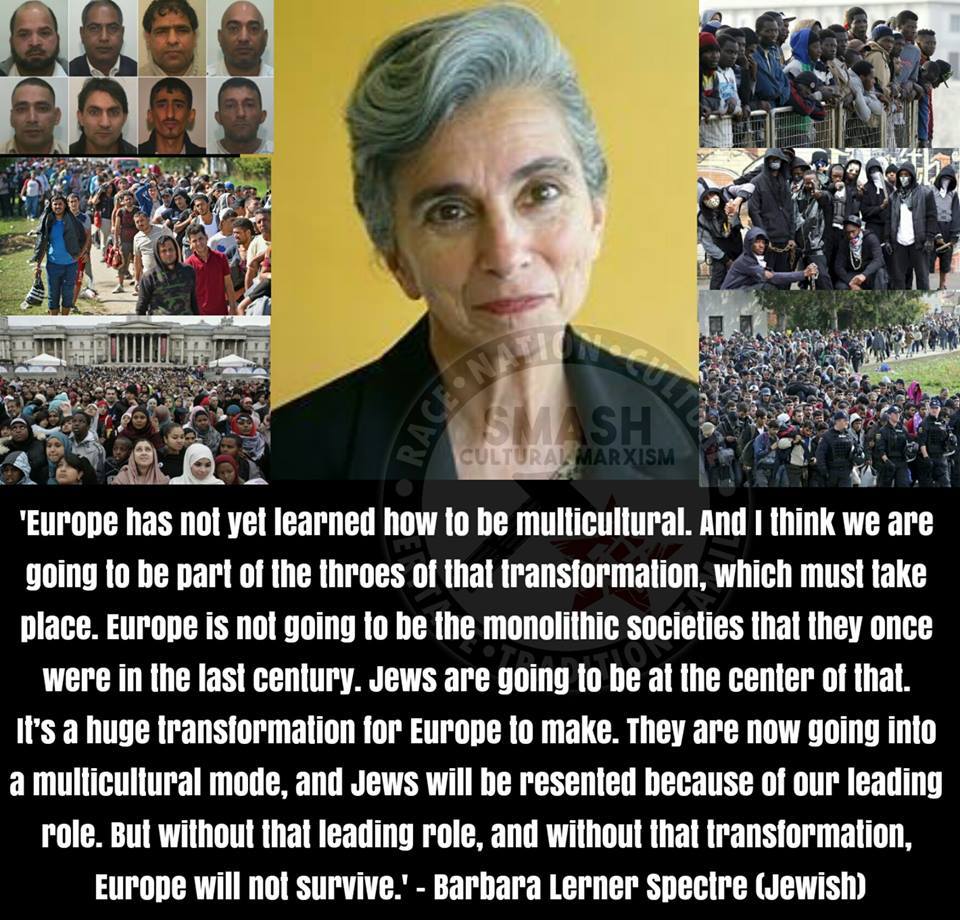 Comment by Anti Everything on January 5, 2017 at 6:41pm
That seems very likely, and convenient. Divide and conquer to the last detail.

It is the usury cabal of mostly Khazarian descent who are behind this chaos. Jews, Arabs, Palestinians and Christians are partially their dupes but mostly their victims like that lady. It's no wonder she dislikes the Palestinians whose criminal elements are ravaging her people. It is the worst of the worst that are send first to Europe and other places in a war waged by terrorist dupes. After the European Civil war the whole Europe will be ready for the final solution, the Talmudic NWO. Soros has been active in this creation of chaos in immigration to Europe and BLM in the US.

Christians are the last to get permission to immigrate because it is not the humanitarian reason that count. This is another type of war where terrorists are used as weapons.

Comment by Anti Everything on January 5, 2017 at 6:36am
Imagine my (lack of) surprise that a 'christian' is not happy with the Palestinian and sticks up for israel. I'm not really sure what to think about this lady.

Mr. Sizzle replied to steve's discussion Look What WE Did.
"Should we say who’s the ownerships in the sports…"
9 hours ago

BITCH SLAPPING some sense into these sports NOTHINS. Mr. Salty has a laugh and splains to the got…See More
13 hours ago
1 Comment 1 Favorite

Phyllis Maka commented on Phyllis Maka's blog post Jim Stone: this was not a broadcast glitch, Pelosi actually glitched like that in real life. WTH is going on???
"frickin lizards their 3D world is breaking up! soon We will actually see it all with these human…"
14 hours ago

Phyllis Maka commented on Phyllis Maka's blog post Jim Stone: this was not a broadcast glitch, Pelosi actually glitched like that in real life. WTH is going on???
"She's a thoroughly programmed "cyborg""
17 hours ago