NOT SOME CHERRY PICKED NONSENSE FROM FIFTY FKN YRS AGO.

This is what happened when trying to view 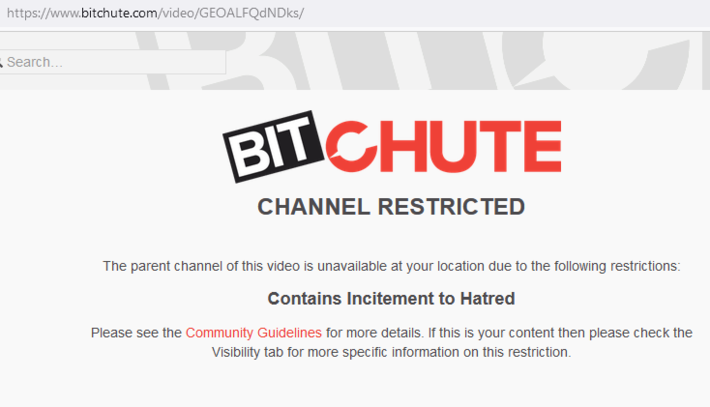 But you can try this instead for some background

"In 2015, A.-L. Bonnel, then still a very young French documentary filmmaker, journalist, lecturer at the Sorbonne, at the behest of her heart, went to Donbass to accompany her father, a Ukrainian by birth. At the height of the war, she captured horrific footage of the Nazi regime's punitive operation and the unprecedented humanitarian catastrophe associated with it. In his journal, the author comprehensively touches on the conflict. The French director gathered the detained people who met by chance during the trip."

If I'm not mistaken U are in finland which if I remember correctly borders russia and is pretty close to ukraine ,what I would like is your take on what's REALLY happening. as you are right close to this mess. I got a friend close to you he posts as  sanity4swedan ,banned on juw tube he's on bitchute and has a pretty good take on the vaxyjab.

First of all, Finland like so many countries, is already fucked up by the leftist-green, in effect Neomarxist decision makers, á la WEF. The decadence building in Finland started seriously forty years ago after president Kekkonen, a true patriot, was replaced by a CIA mule, Mauno Koivisto.The politicians have since then been consistent in bringing this country down, first economically, then culturally, morally and demographically. We were deep in shit already before the Covid-1984.

Now NATO has been expanding from the western Europe to east since the nineties already reaching Russian borders in Estonia. Modern missiles, conventional or nuclear, are capable of traveling at supersonic speed and cover distances of a couple of hundred kilometers in mere minutes. This, with NATOs advance towards Russia, must have made them very nervous. Furthermore, NATO never respected the promises made to Russia after dissolving of the Soviet Union and did expand anyway. It is clear that they (NATO) want to destroy Russia by war. After all we know who calls the shots, the military industrial complex and the Usury Cabal. War has always been on their agenda as it facilitates the social change and generates huge profits.

Finland is being goaded into NATO with the help of our bought politicians. There is plenty of evidence supporting our traditional policy of neutrality but that has been totally ignored. Finland is the Santa Claus of Europe, borrowing money to support the richer south Europe and German and French banks. That is, against the will of the people. But that hasn't kept our leaders from destroying the country anyway. Now as the final nail to the coffin they want to take us in the NATO. If that does not provoke Russia enough then they push more and use also Finland as a proxy army just like they used Ukraine to fight Russia. Will it work?

Finland does not need more enemies to destroy us as we already have our government. As a positive note a war that destroys the country would also liberate us from our corrupt leaders, hopefully. After that we need to start it all over again.

Sky news YouTube had the president of Finland speaking where he indicated his belief that Russia was 'attacking' a neighbouring country (when it's clear that Ukraine nazis are attacking regions of their own country in russian speaking areas) It is a conflict that has resulted from Ukraine aggression. It would be unfortunate if Sweden and Finland were led astray and joined nato by the wrongful conclusion that they would be next as neighbour countries when they have not been unpleasant to russian speakers near by  run secrete labs, or housed nazis.   https://www.youtube.com/watch?v=MhLNBxpo8zY

Is president Niinistö so insulated from the Ukrainian reality that he doesn't understand there isn't just one party to blame for the war? I find it hard to believe as there are at least some highly experienced Finnish politicians that understand the situation and can advice him. As said above our leaders have been taking this country down for a long time, and that trend has accelerated lately. This latest Ukrainian crisis and the following NATO chicanery is most probably an effort to hide their failing policies, arising debt, lunatic leftist-green spending based on illusions, and most importantly the Covid-1984 genocide scandal. They must fear the exposure of the vaccine deaths and the whole bunch of lies around that circus. These are crimes against humanity committed by traitors who claim to represent us. Add the manufactured famine coming the next winter designed to wipe the memories of the population turned into a confused flock of mind controlled slaves until their head is on the block. The traitors are upping the ante in this game until it's all or nothing. When the mind control schemes crack open there may be no stopping of the violence that takes down our traitors.

Are you talking to me or Parr, If me here's the original didn't mean to "doc" my post, get it "doc my post" as in not leaving a VALID link. You see what I mean about his obstinate ass now? .He accused you of "preaching" just for asking  a simple question yet constantly post shit from last decade if not LAST CENTURY. Once again It might be your location Less as I get there from here just by right clicking and open in new window

Watch on TV: Freeview 236, Sky 515, Virgin 626Listen on DAB+ RadioDownload the GB News App to watch live wherever you are, catch up with all our shows and ge...
2 hours ago
0 Comments 0 Favorites

"Dark world Stuff Up. Now lets shine some light on this bullshit revolving around Australia and that…"
9 hours ago

tjdavis favorited Doc Vega's blog post Who Are You to The Federal Government and Do They care?
20 hours ago