Amazon announced on Thursday they are cancelling plans to build a headquarters in New York City.

Amazon blamed local politicians for the decision to nix their plans in New York City.

Alexandria Ocasio-Cortez
✔
@AOC
Anything is possible: today was the day a group of dedicated, everyday New Yorkers & their neighbors defeated Amazon’s corporate greed, its worker exploitation, and the power of the richest man in the world.

"After much thought and deliberation, we’ve decided not to move forward with our plans to build a headquarters for Amazon in Long Island City, Queens" - Amazon spokeswoman Jodi Seth

An Amazon spokesperson blamed Rep. Alexandria Ocasio-Cortez (D-N.Y.) and her vocal resistance for the company’s shocking decision to cancel plans for its New York City headquarters on Thursday.

“It wasn’t any one incident,” Seth noted. “It was that the environment over the course of the past three months had not got[ten] any better. There were some local and state elected officials who refused to meet with Amazon and criticized us day in and day out about the plan.”

She actually believes that NYC was handing $3B to Amazon.  These were tax deductions and the people that Amazon hired would have paid taxes and put money into the community.  Economics major? 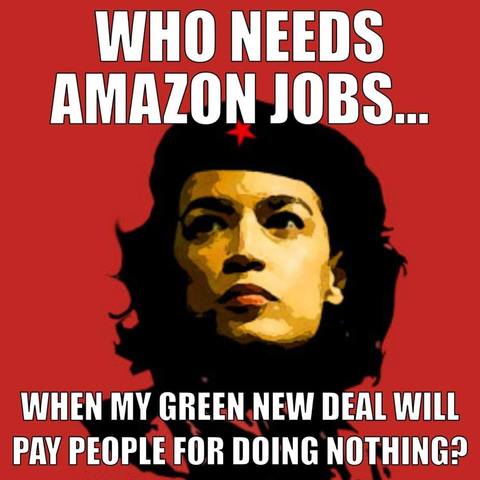 Read up a little on this, heard there was some corporate chatter; the law they passed to murder full-term baby negatively effected them. They thought it was bad juju. I would, too.

Of course, this Cortez woman had her hand in it, too. I thought she was just put in office to make a mockery of our system, and smoke & mirrors. Now, I'm thinking they WANT us to think she's a moron, so we don't take her seriously. She acts so dumb it's hard not to think it.

I'm wondering is she a Trojan horse. She's clearly is communist. Call it the Democrat Liberal Communist Left Party, it's ALL Communism, nothing less! She is the opposite of our Constitution. I feel she and other commies have no business in our government. She could possibly be the most dangerous person in office.

The One replied to The One's discussion USA Alíen UN Invasión? (They will be come Main Witnesses lol!)
"Friday Night Radio Wolf 1,609.3kz, in the plate: "Get Here" from Oleta  Adams &…"
1 hour ago

Phyllis Maka commented on Phyllis Maka's blog post WHAT GOES AROUND COMES AROUND
"That's why these 'white coats' have to physically force their poison in you, with or…"
2 hours ago

Chris of the family Masters commented on Phyllis Maka's blog post WHAT GOES AROUND COMES AROUND
"I just learned in Chinese and Ayurvedic Indian medicine there was no concept on contagion...."
3 hours ago