Biological man celebrated as “woman of the week” after beating real women in track and field; Lunacy of transgenderism is an insult to all women everywhere

University of Montana, what a shame

(Natural News) Jonathan Eastwood, who now goes by the transgender name “June,” has been dominating cross-country and track and field competitions at the University of Montana (UoM) for several years now, thanks to the school’s acceptance and celebration of biological males pretending to be “females” who decide to compete against biological females in sports. This, of course, is of no interest to the Feminists. It's like the humanity is being divided into casts where the lowest is the heterosexual white male with that hetero female just a bit higher. Rising up the cast system is done by adopting perversions and living in a world of delusions. The top dog? Could it be a paedophile Satanic witch deep in blood sacrifice.

Another real problem being caused by these Transgender women weirdos is their tendency towards wanting to be lesbian and This is causing Huge problems in the lesbian community when these trannys Demand their Right to be included in social areas where they are not welcome. Anger and  disharmony has erupted on several occasions between these groups leaving the genetic girls feeling disrespected and undermined. Oh dear, friction in the looney left camp rises again.

Online roots of the term TERF originated in the late 2000s but grew out of 1970s radical feminist circles after it became apparent that there needed to be a term to separate radical feminists who support trans women and those who don’t. Many anti-trans feminists today claim it’s a slur, despite what many see as an accurate description of their beliefs. They now prefer to call themselves “gender critical,” a euphemism akin to white supremacists calling themselves “race realists.”

"Gender affirmation surgeries were available—the first such operation was conducted in 1920 by, no surprise, a German doctor—but uncommon. From today’s perspective, it is therefore unclear whether an individual who identified as a transvestite in thirties Germany, including Hans Hannah Berg, was what we would today consider transgender, nonbinary, a cross-dresser, or something else altogether. In the very first issue of The Third Sex, an essay by Dr. Wegner acknowledges the richness of the term. “Just as people are all different in their outward appearance and inner attitudes, so are the characteristics of transvestites.” Many queer activists in the Weimar Republic were concerned that the population of gender variant people was too fragmented. Trans people were not as visible or as organized as gays and lesbians. Friedrich Radszuweit, the leader of the Federation for Human Rights and the publisher of several queer periodicals, saw a solution. To foster a trans community, he produced The Third Sex.

As liberties expanded in the Weimar Republic, conservatives felt there was a threat to traditional “moral” culture. Homosexuals and trans people were seen as especially dangerous, capable of corrupting youth and devastating birth rates. While the queer scene blossomed, the police kept lists of these sexual deviants and arrested violators of the old Prussian anti-sodomy law.

Then, in January 1933, the Nazis seized power. Within months of Hitler’s appointment as chancellor, the Nazis shut down many of the gay, lesbian, and transvestite clubs. Queer magazines were shuttered and queer titles removed from bookstores as part of the Nazis’ “Campaign for a Clean Reich.” Anything deemed “filth” was banned from public view. In May of that year, Nazi students stormed Magnus Hirschfeld’s Institute for Sexual Science and ransacked his library of more than twelve thousand books. With help from storm troopers, they burned the books on the streets of Berlin, destroying much of the historical record of queer life before World War II." Quote from the Paris Review: 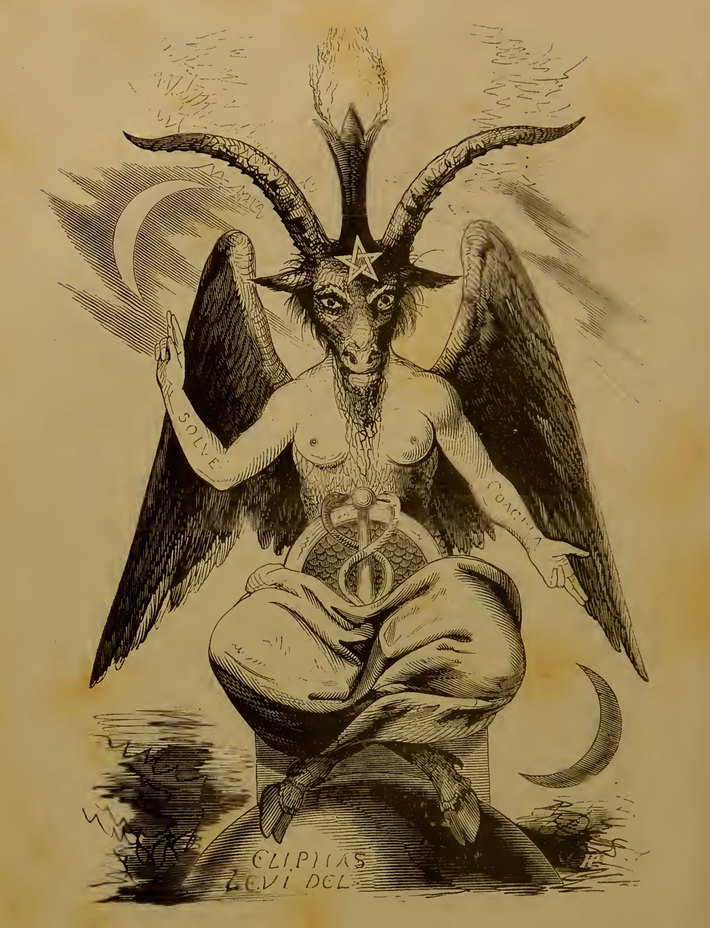 "Careful examination of the Eliphas Levi illustration of Baphomet offers several clues as to the nature of this mythical creature which represents Satan. First off, we notice the binary thinking; the word ‘solve’ is tattooed on its right arm and ‘coagula’ its left. What do these mean? A large portion of Satan’s plan for this world is to do the exact opposite of what our God intended. This means dissolving (solve) everything that God has brought together and bringing together (coagula) what God has separated. The family unit is just one example of what Satan has been dissolving, while at the same time bringing together the male and female genders through transgenderism.

Yes, the ultimate expression of this coagula as tattooed upon Baphomet’s left arm is no less than the attempted merging of male and female into these genderless sorts of creatures. Another important thing to note of Baphomet is that it is a transgendered being, having attributes of both sexes. This is also a part of Satan’s plan, to promote gender confusion and even persuade people to reject their God-given gender identities.

As the trans-agenda sweeps the planet, the egghead scientists are going to say it indicates that males and females are naturally evolving into one, and transgenderism is simply a healthy expression of that!

Towards that end, I believe that the current flood of sexual assault and impropriety charges against certain well-known figures that largely began with “The Character Assassination of Bill Cosby” are going to branch off to a place that no one (but the planners) expected. In the future, any male who dares to reveal their normal heterosexual desires will be reported to authorities for review. This behavior will be characterized as ‘sexual aggressiveness’. This is the coming 5th wave feminist agenda folks!

Sound far-fetched? There are already 4th wave feminists (lesbians) who define all sexual relations between a man and a woman as rape; non-consensual, and marriage as nothing more than legalized rape! These misandrists would like nothing better than to see all men castrated. Because of growing concerns over sexual assaults by men who are lacking is self-control, I believe it will be proposed that the sexual drive of normal male heterosexuals need to be chemically curbed with hormone therapy, namely estrogen. Chemical tweaking of our sexual traits by taking estrogen or testosterone will be the norm, and soon these will be available over the counter." Quote from the Prophetic Explorer website:

Permalink Reply by Reg Allaby on January 7, 2020 at 6:05pm
Theres no such thing as transgender. ...theres just people with mental disorders ...and the left wants everyone to accept and tolerate or you're "transphobic"... "homophobic"...

We live in a world of delusion, transgenderism is one of them. Our society is based on lies and controlled by some very twisted perverts.

Oh yeah,  South Park did an episode about this...

Good luck is for dudes... hilarious video and so real

cheeki kea commented on steve's blog post Inside China Horrific vids of what's happening . WARNING! Not for the SQUEMISH
"Good post Steve, I'm really lost for words after watching those videos. Very sad to see what…"
52 minutes ago

"Ann Coulter is also right. The problem is we keep choosing the lesser of two evils, evil being the…"
1 hour ago

cheeki kea favorited steve's blog post Inside China Horrific vids of what's happening . WARNING! Not for the SQUEMISH
1 hour ago

Syrians Are In Desperate Race To Outrun Brutal Regime Offensive

"Strangely enough, Mike Rivero said on his show the Podestas just have "unusual taste" in…"
1 hour ago

"No line, except for the line of cops and ambulance staff coming to put you in isolation. "
3 hours ago

"Yes, well you know you've got Aussie neighbours when this goes down on the grass berm,…"
3 hours ago

stormtruther commented on stormtruther's blog post Plucky pensioner bravely fights off attacker who tried to rob him at ATM (VIDEO) (The older you get the less you have to lose)
"see the old guy like, come here mate i've got something for ya , lol"
3 hours ago

We Are Close,Fear,Panic The Feeling Of Doom Overtakes The [DS],Justice Is Coming

Chris of the family Masters favorited Phyllis Maka's blog post No matter how Coronavirus plays out, this is the most relevant statement ever issued and...... Jim Stone
8 hours ago