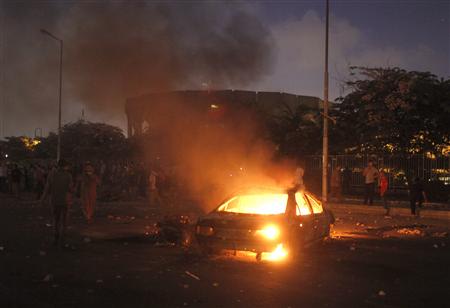 By Tom Perry and Noah Browning

Men in helmets and black police fatigues fired on crowds gathered before dawn on the fringes of a round-the-clock sit-in near a mosque in northeast Cairo, Mursi's Muslim Brotherhood said.

"They are not shooting to wound, they are shooting to kill," said Brotherhood spokesman Gehad El-Haddad. "The bullet wounds are in the head and chest."

A Muslim Brotherhood website said 120 people had been killed and some 4,500 injured. A Reuters reporter counted 36 bodies at one morgue, while health officials said there were a further 21 corspes in two nearby hospitals. 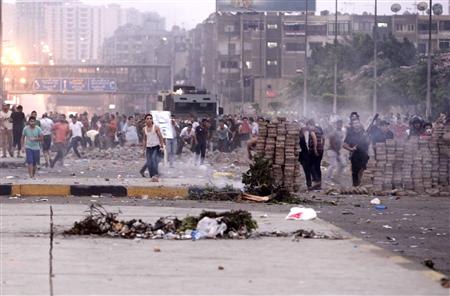 Activists rushed blood-spattered casualties into a makeshift hospital, some were carried in on planks or blankets. One ashen teenager was laid out on the floor, a bullet hole in his head.

Ibrahim said local residents living close to the Rabaa al-Adawia mosque vigil had clashed with protesters in the early hours after they had blocked off a major road bridge. He said that police had used teargas to try to break up the fighting.

Well over 200 people have been killed in violence since the army toppled Mursi on July 3, following huge protests against his year in power. The army denies accusations it staged a coup, saying it intervened to prevent national chaos.

The Arab world's most populous state is battling economic woes and struggling with the transition to democracy two years after Hosni Mubarak was swept from power in the Arab Spring. 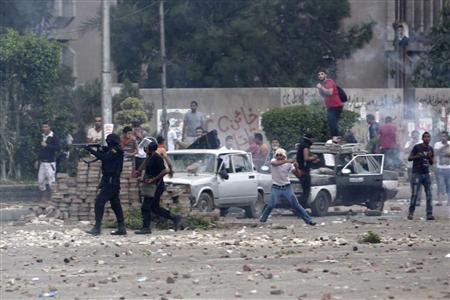 Hundreds of thousands of Egyptians had poured onto the streets on Friday in response to a call by army chief General Abdel Fattah al-Sisi for nationwide demonstrations to give him backing to confront the weeks-long wave of violence.

His appeal was seen as a challenge to the Brotherhood, which organized its own rallies on Friday calling for the return of Mursi, who has been held in an undisclosed location since his ousting and faces a raft of charges, including murder.

Interior Minister Ibrahim said the pro-Mursi sit-ins would "God willing, soon ... be dealt with" based on a decision by a public prosecutor, who is reviewing complaints from local residents unhappy with the huge encampment on their doorstep.

The Brotherhood is a highly organized movement with grassroots support throughout Egypt, making it hard to silence even if the army decides to mount a bigger crackdown.

European Union foreign policy chief Catherine Ashton said she "deeply deplores" Saturday's deaths and urged all sides to halt the violence. There was no immediate comment from the United States, which provides Egypt with some $1.5 billion dollars of aid a year, mainly military hardware.

Washington has delayed delivery of four F-16 fighters because of the turmoil, however, officials have indicated they do not intend to cut off aid to a country seen as a vital ally and which has a peace deal with neighboring Israel. 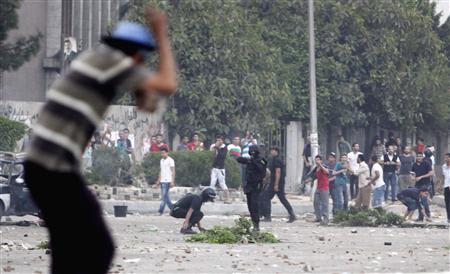 Witnesses said police first fired rounds of teargas at Brotherhood protesters gathered on a boulevard leading away from the Rabaa mosque, with live shots ringing out soon afterwards.

"There were snipers on the rooftops, I could hear the bullets whizzing past me," said Ahmed el Nashar, 34, a business consultant, choking back his tears. 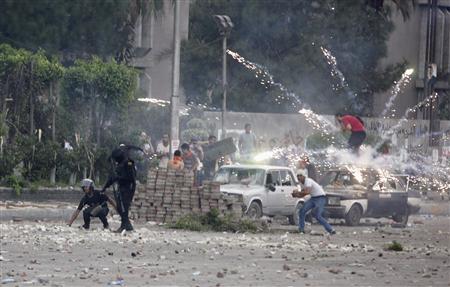 Dr. Ibtisam Zein, overseeing the Brotherhood morgue, said most of the dead were hit in the head, some between the eyes.

The bodies were wrapped in white sheets and laid on the floor, their names scrawled on the shrouds. A cleaner busily mopped the floor, washing away pools of blood.

Haddad said the Brotherhood remained committed to pursuing peaceful protests, despite Saturday's deaths - the second mass shooting of its supporters this month by security forces, who killed 53 people on July 8.

My thoughts exactly...unless Americans are too mesmerized to get out from in front of their TVs, in which case the entire nation will experience what happened in Boston and New Orleans after Katrina as viewed from the comfort of their very own living rooms.

Interesting that it was snipers that did the shooting, at least in part...recall Libya early days ? where snipers were blamed as being Gadaffi forces ? The fact that a sniper is hidden means they cannot be identified as to who exactly they are and Occum's razor is probably not exactly relevant when you have Freemasonically controlled Muslim Brotherhood in the picture. I would not put it past Muslim Brotherhood to shoot the protestors themselves and blame the Egyptian Army, this tactic has also been used in Syria, terrorists dressing as Army to apportion blame to Assad.

Sounds possible to me.

Permalink Reply by William Martin on July 27, 2013 at 10:45am
Politics so bad that your views cause your death? At least here the Zionist`s just make sure you'll never work again. Also that you'll never have a political career.

Which oddly is why Israel will never become the 51st. state - As then they could only OWN 2 Senators. :-P

Now it's out in the open:"Responding to the beheading of a school teacher by an Islamist in Paris,…See More
6 hours ago
0 Comments 0 Favorites

"This is the result of a face mask"
11 hours ago