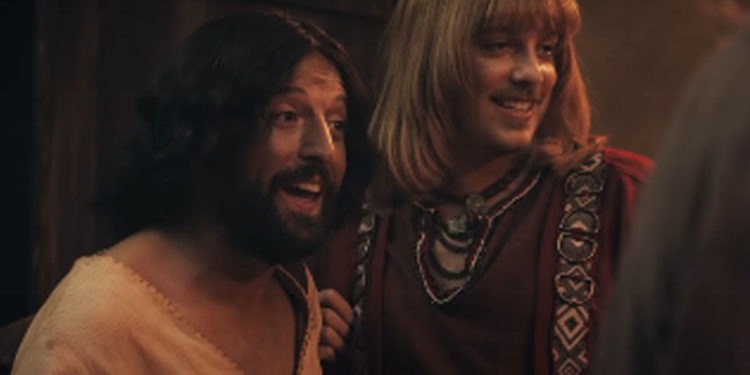 A Brazilian comedy group and Netflix faced a huge backlash after releasing a Christmas Special parody show where Jesus is gay.

The Netflix film, A Primeira Tentação de Cristo, or The First Temptation of Christ, depicts a 30-year-old Jesus Christ as gay and taking his boyfriend, Orlando, to meet his parents, Mary and Joseph.

As a result, over a million people took to signing a petition to ban the film for “seriously offending Christians.”

According to Caldron Pool, the film reportedly “follows the adventures of Jesus’ disciples after they wake up hungover the morning after the Last Supper… wondering where the Messiah is.”

The group, whose content has been compared with Monty Python, has already signed deals with Netflix and Brazil’s Fox Network.

According to one petitioner: “It is a serious offence against Jesus Christ and the Christians! It has no historical evidence to support the insinuations presented.”

Another said:  “A movie that came to destroy the image of Christ who gave His life to save us. Netflix has featured series that the family can’t join to watch. God created man and woman and no one can change that.”

The regular satirizing of Christmas has brought forth a blatant double standard, particularly in a more multicultural global society: anything against Christianity is fair game; anything against other faiths is unacceptable.

Santa was recently portrayed as a black man with a gay white husband.

Rudolph the Red Nosed Reindeer has also been treated to a 21st Century makeover in a few depictions.

My suggestion would be to do a show about Gay Mohammed who's in love with a pig, but they wouldn't do that because that would be insulting to a religious groups beliefs.

That would be something, but only the Christianity is free game. Mr. Sizzle commented on Larry Flinchpaugh's blog post The Cure is Worse than the Disease
"One can research this further and it’s only a beginning…"
6 hours ago

Mr. Sizzle favorited Larry Flinchpaugh's blog post The Cure is Worse than the Disease
6 hours ago

Covid and Global Warming are 2 scams joined together by desperate controllers.…See More
6 hours ago
0 Comments 0 Favorites

"Who does (FB) anymore? Is that a FB ban? Idk   You’re essentially giving them everything…"
6 hours ago

"Petrus Romanus, the last pope is here."
16 hours ago