If you disagree with the medical establishment’s lies about vaccines, you have no right to exist in society at all, say pro-vaccine authoritarian tyrants. In case you were wondering what the real plans are for people who oppose the quack science dogma of the vaccine industry and its child-murdering vaccine advocates, look no further than today’s rant from anti-Trump neocon Rick Wilson.

“Anti-vaxxers are a scourge and a strong argument for re-education camps, the immediate seizure of their property, and putting their children into protective custody,” tweeted Rick Wilson (@TheRickWilson), a neo-con Republican strategist and so-called “never Trumper.”

This demand sums up the medical police state tyranny and anti-human authoritarianism that characterizes vaccine advocates, almost all of whom are “medical child molesters” who maim children for profit. They quite literally seek to throw parents in concentration camps if they refuse to have their children injected with nearly a hundred toxic vaccines that contain neurotoxic substances such as aluminum, squalene, mercury, aborted human fetal tissue, formaldehyde and even complete DNA sequences of aborted human babies whose genes were gen....

Here’s a screenshot of the tweet, since Rick Wilson is likely to delete it soon: 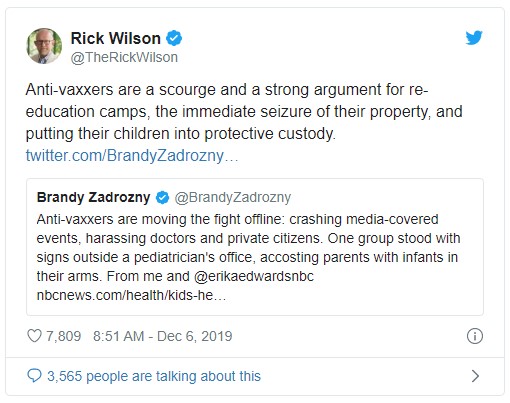 Rick Wilson is a creature of the criminal-minded Bush administration, which engineered the 9/11 attacks to put in place Patriot Act expansions of deep state surveillance to spy on the American people in the name of “national security.” As explained by Pulpitandpen.org:

Wilson is best known as being the Republican strategists who served as George W. Bush’s Florida campaign chief during the hotly contested 2000 Florida presidential campaign re-count. Wilson was an appointee to the Department of Defense by then-Defense Secretary, Dick Cheney. He has also serve Rudy Giuliani’s mayoral campaigns and recently wrote the book, Everything Trump Touches, Dies. He has been a columnist for The New York Times, The Federalist, and Daily Beast.

Rick Wilson’s desire to have the state seize the homes of “anti-vaxxers,” kidnap their children and throw the parents into concentration camps is indicative of the deranged medical violence and tyranny that characterizes the entire vaccine industry. Wilson isn’t an aberration; he’s a “centrist” among vaccine pushers who almost universally share support for pedophilia, open borders child trafficking, and medical child abuse, by the way. The same people pushing vaccines also push LGBTP – pedophilia – including “Drag Queen Story Hour” perversions.

Rick Wilson is apparently voicing the beliefs of California State Sen. Richard Pan, also known as the “Vaccine Joker,” who accepts campaign bribes from Big Pharma to force his medical violence upon the children of California through various vaccine mandates such as SB 277. Richard Pan has all the characteristics of a medical molester and chemical violence child abuser, insisting that parents have no rights to protect children from his medical violations of children’s bodies.

Make no mistake: The vaccine industry is an authoritarian, anti-human rights “Ministry of Truth” medical cartel that believes it owns your body and can force you to be injected with literally anything they call a “vaccine,” regardless of what it contains.

These beliefs are irreconcilable with fundamental human freedom and civil rights, yet they are being pushed aggressively by delusional tyrants who are true sociopaths that reflect the very same philosophies exhibited by Adolf Hitler, Joseph Stalin, and other heinous mass murderers. If you disagree with them, they claim the right to throw you in a concentration camp and kidnap your children. Rick Wilson even adds that the government should steal your private property, which includes your home, your bank accounts, and all your assets.

This is literally what these people believe. They are not joking. This is what they demand.

And since the vaccine industry now has total immunity in the courts, in the press, and also complete protection by the tech giants who ban and de-platform all alternative views, there is nothing the vaccine industry won’t attempt to silence dissent and force its brain-damaging poisons on all children in America and across the world.

We are witnessing the true desires of the vaccine industry now on display, so thank you, Mr. Wilson, for finally admitting what all the other vaccine pushers have been demanding behind closed doors.

Permalink Reply by Chris of the family Masters on December 16, 2019 at 4:32am
Mr Wilson needs to be injected with 100 vaccines equaling a dose for the one infant. Need to de-register children more now than ever before.

In the frantic effort to co-opt all of culture to advance the cause of comprehensive revolution,…See More
2 hours ago
0 Comments 0 Favorites

"This statement can trigger asleep into a violence. That's how they resolve any dialog."
5 hours ago

"Been there, in Detroit and Georgia, etc., with huge chunks of ice, and rocks, and full cans of Coke…"
11 hours ago

cheeki kea commented on stormtruther's blog post It’s one hell of a racket.You create a fake crisis regarding so-called “climate change“. You use this “climate emergency” to lock up national parks
"https://www.tvnz.co.nz/one-news/new-zealand/petition-jacinda-ardern-calls-koalas-introduced-nz-austr…"
12 hours ago

cheeki kea commented on stormtruther's blog post It’s one hell of a racket.You create a fake crisis regarding so-called “climate change“. You use this “climate emergency” to lock up national parks
"Petition to Jacinda Ardern calls for koalas to be introduced to NZ as Australia's bushfires…"
12 hours ago

cheeki kea favorited stormtruther's blog post It’s one hell of a racket.You create a fake crisis regarding so-called “climate change“. You use this “climate emergency” to lock up national parks
13 hours ago

"I urge all parents to teach daughters ( and sons ) marital arts A.S.A.P There is No Time To Wait.…"
14 hours ago

"The silver impregnated muslin gauze is known by the trade name of Silverlon. It may require a…"
15 hours ago