PASSENGER JET SHOT DOWN OVER UKRAINE

Malaysian Plane 'Shot Down' With 295 On Board

A Boeing 777 flying from Amsterdam to Kuala Lumpur comes down in Ukraine after reportedly being hit by a ground-to-air missile.

A passenger plane with 295 people on board has been shot down as it flew above eastern Ukraine, according to aviation sources.

The Malaysia Airlines plane, which was flying from Amsterdam to Kuala Lumpur, was travelling at an altitude of 10km (6.2 miles) when it was shot down, Russia's Interfax reported.

An adviser to the Ukrainian interior ministry said the Boeing 777 was brought down by a Buk ground-to-air missile.

All 280 passengers and 15 crew members who were on the plane are believed to have died, he added.

The Boeing 777 that crashed in eastern Ukraine. Pic: Andreas Fietz

A spokesman for Malaysian Airlines, still reeling from the loss of flight MH370 in March, confirmed it had lost contact with flight MH17, which took off from Amsterdam at 12.14pm local time.

The flight disappeared from radar as it flew over Ukrainian airspace, the spokesman said.

Ukrainian Prime Minister Arseniy Yatsenyuk ordered an immediate investigation into what he described as a "catastrophe", while his Malaysian counterpart Mohd Najib Tun Razak said he was "shocked".

Alexander Borodai, the eastern Ukraine separatist leader, claimed the airliner was shot down by Ukrainian government forces, although officials in Kiev denied any involvement.

There has been no official comment from authorities in Russia.

Sky's Katie Stallard, in Moscow, said media reports suggest the plane came down in the Donetsk region, where there has been recent heavy fighting amid continuing tensions between Russia and Ukraine.

Data from Flightradar24 suggests the plane had just passed the city of Kremenchuk, around 300km (186 miles) from the Russian border, when it disappeared.

Several videos apparently filmed in the area, none of which Sky News has been able to independently verify, show plumes of thick, black smoke rising high into the air.

A Reuters correspondent at the scene, close to the village of Grabovo, said he could see the wreckage of a burning aircraft and bodies on the ground.

"It’s possible the Ukrainians flapped a bit, thought it was hostile and shot it down.

"Perhaps it was confusion at the Ukrainian air defence centre.

"It looks like someone failed to recognise this was a civilian plane and shot it down."

A spokesman for Boeing said it was aware of reports of MH17's disappearance, while a Foreign Office official added: "We're urgently working to establish what has happened."

The White House said US President Barack Obama had spoken to his Russian counterpart Vladimir Putin and asked his advisers to keep him updated.

If Russia supplied the rockets to the terrorists, Russia is liable for any and all damages. Russia should be in the same category as the Chetzen rebels. Russia pirated some ships from the Ukrane, isn't it time to bring Russia before the world court because of its' piracy and terrorism?

I'm patiently waiting to find out who was on that plane.

I was on a lunch at work when I heard the news about this. My heart just sank! Here we go again... 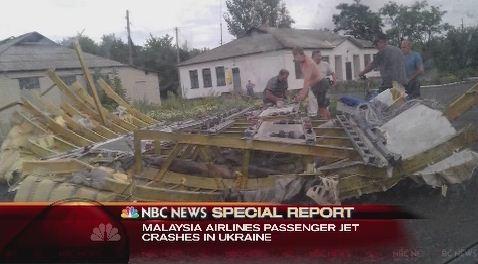 Did ya find one??

show these to your friends and family who believe that gubmint version of 9/11 ;)

H or anyone that might know this... when did they actually get to the scene of the crash? Was it immediately after the crash or did a lot of time elapse?

am sure there are some, ya know these msm scumbags are going to NOT show Mr.& Mrs. America the carnage pics.

stand corrected spidey my man...just found 4 bodies, and a leg, 1 female for sure.....2nd pic from bottom

Chris of the family Masters commented on stormtruther's video

"I'd like to see the arrest warrant for that..."
9 minutes ago

"Don't remind me, lol. It's bad enough it seems to be in every TV show and film."
3 hours ago

"truth, good one lmao"
8 hours ago

WHOA! RUDY BETTER HAVE SECRET SERVICE PROTECTION NOW THAT HE DID THIS…..

part of an extended interview with writer Yossi Gurvitz [ http://ygurvitz.net ] - transcribed & translated from Hebrew to English by Dena Shunra
9 hours ago
0 Comments 0 Favorites

cheeki kea commented on James Roberts's status
"Answer : - Enemy. always. ( unless Proven to be otherwise, beyond all and any reasonable doubt, and…"
10 hours ago

steve commented on steve's blog post The Dangerous Rise Of Men Who Won’t Date Woke Women
"Hey All I was trying to post the pic & quote from Mr. Theodore Dalrymple,  it is in the…"
12 hours ago