(CNN)Sperm counts of men in North America, Europe, Australia and New Zealand are plunging, according to a new analysis published Tuesday. 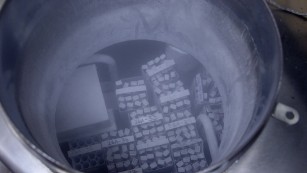 Fighting the male biological clock by banking sperm
Researchers led by Dr. Hagai Levine of Hebrew University of Jerusalem examined thousands of studies and then conducted a meta-analysis of 185 studies. These included 42,935 male participants who provided semen samples between 1973 and 2011. The chosen studies were well distributed over the nearly 40 years of the study period and among 50 different countries. The analysis included information on fertility status, age, ejaculation abstinence time, semen collection method, sperm count method and geographic location at the level of continent.
Based on their analysis, the international team of researchers from Brazil, Denmark, Israel, Spain and the United States reported a decline in sperm concentration of 1.4% per year with an overall drop of 52.4% during the entire study period for men living in industrialized, Western countries. Meanwhile, total sperm count among the same group plunged 1.6% per year and 59.3% overall. By comparison, the researchers found no significant declines in the sperm counts and sperm concentrations of men living in South America, Asia and Africa.
"The extent of the decline is a heartache," said Levine. "It's hard to believe -- it's hard to believe for me."
The high proportion of men in Western countries with sperm concentrations below 40 million/ml is "particularly concerning," wrote Levine and his co-researchers, because evidence indicates that a sperm concentration below this threshold is associated with a "decreased monthly probability of conception."
https://edition.cnn.com/2017/07/25/health/sperm-counts-declining-st...

Here is a possible reason

"In other news, this happens everyday in the US and the (((MSM))) is totally silent about…"
4 hours ago

Less Prone favorited Doc Vega's blog post How Disinformation has Been Used to Change our Modern Society We Were Warned a long Time Ago!
6 hours ago