A lot of us are back at school this week. Most of our schools have student clubs of one kind or another, dealing with different interests. Many of those clubs are of a political variety. So why not start some form of an antifa student club at your school?

There are some real advantages to forming a club like this. It can give you access to meeting spaces and a large body of interested people. It can allow you to bring in antifa speakers or hold antifa film nights or even conferences. It can set you up to raise funds for anti-fascist causes. It can give you a reason to reach out to and collaborate with like-minded and related student clubs on a more-formal basis.

But there are also drawbacks. It can attract the attention of fash/the authorities. It’s harder to remain anonymous when you might have to elect a board or fill out official forms. So consider carefully whether or not this is a good idea or what you’d have to do to ensure everyone’s safety while still pulling this off.

1) Consider if this is a safe and feasible idea. Would it put you or other members in jeopardy? If you went with a more innocuous name like “Students Against Bigotry & Oppression (SABO!)” or something instead of using an explicity anti-fascist name, would that alleviate trouble? If you want to discuss specific security concerns with us, get in touch!

2) Find out what it takes to start a student club - do you need to get forms filled out from your student union/student association? Do you need to have a teacher or staff person agree to be a part of it? Do you need to write up a club constitution or have your application approved by a board of some kind? Figure out what the rules are and take it from there.

3) If there are already student clubs that would likely be sympathetic or maybe a public interest research group at your school, maybe talk to those folks first about your idea to find out if they’d support the initiative and what kind of advice or support they could offer.

5) Some resources for you:
-AFN’s list of resources for antifa crews (esp. in the UK!)
-Our list of downloadable & printable flyers & info related to anti-fascism
-Our list of the best places to pick up antifa gear
-The Campus Antifascist Network would have lots of advice and ideas for those of you looking to start something @ your postsecondary institute of learning and already have info about starting a chapter @ your school! Get in touch with them! 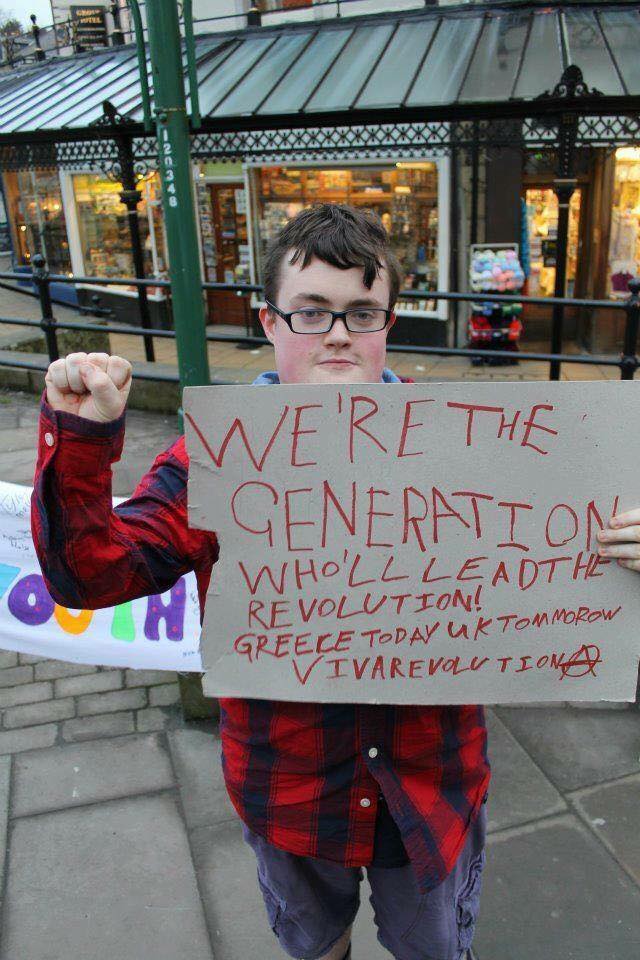 I know of idiot groups that tried this on, (race based, woman rights rubbish etc) only to see the whole thing blow up in their face- for disrespect. New enrolments for higher education suddenly stopped, Big gov panic fund made  Uni Free, but too late, damage done and no takers. So A Fail in this case.

The first public political activity I participated in was a tax protest. I was 12. My grandfather had given me a copy of None Dare Call It Treason in the previous year, and I took it's message to heart.The man leading the protest became a militia leader shortly thereafter.

The book (a great read): None Dare Call It Treason by John Stormer

"I swear, if you want to find the most incisive and hilarious criticism of the Democrats, look to…"
32 minutes ago

James Roberts commented on Chris of the family Masters's blog post Trump Drops Requirement for Employers to Validate Citizenship of Employees
"But of course. Meanwhile, sports stadiums full of fools will cheer their fool heads off."
41 minutes ago

James Roberts commented on Chris of the family Masters's blog post Coronavirus: run, here come the experimental drugs
"Do you know how drugs are "discovered"? They always start by finding / making a novel…"
48 minutes ago

cheeki kea commented on Doc Vega's blog post Robot Companion Coming To Your Town Soon
"PS.. I think any man that brings up a baby or child is amazing and deserves a medal. To bring up 4…"
2 hours ago

cheeki kea commented on Doc Vega's blog post Robot Companion Coming To Your Town Soon
"You're right Doc V. it is the brave new world and it's been coming for some time. When I…"
2 hours ago

cheeki kea commented on Chris of the family Masters's blog post Trump Drops Requirement for Employers to Validate Citizenship of Employees
"Manufacturing will be next on the chopping block, or what's left of it. However there's…"
4 hours ago

cheeki kea commented on Chris of the family Masters's blog post Trump Drops Requirement for Employers to Validate Citizenship of Employees
"It'll be the death of the workplace. Employers use to jump through hoops to get overseas staff…"
6 hours ago