Stabbing horror as teenager is heard crying 'Help, help' before 'boy is disembowelled' and three others are hurt in carnage in south London park - as police arrest six boys as young as 15

Police called to the scene shortly before 5.30pm today after reports of stabbing

It is unknown what the condition of the victim are. All victims taken to hospital

By CHARLIE BAYLISS FOR MAILONLINE

A teenager is fighting for his life today after he was disembowelled in the street last night in the latest knife crime to hit the capital.

The youngster was one of four stabbed as gang violence erupted on a South London housing estate echoing with screams of ‘help, help’ yesterday evening.

Residents of the Elmington Estate in Camberwell told how they saw a group of boys running minutes before police arrived on the scene at around 5.30pm

Witnesses described how the most seriously hurt teenager fell to the floor clutching his stomach.

One witness said: 'I saw the youth come running from the block. He came to the corner and dropped' and described seeing a boy with their 'intestines falling on the ground'.

Permalink Reply by Chris of the family Masters on August 17, 2018 at 6:00am
People need to buy guns, even on the black market.

Gun Bans? Then Make Your Own!

Given that it's only down the road...

This seems rather apt - as this is the modus operandi of the street.

Camberwell has always been a shithole, for a time in the late 90s - early 00s it was safer.

I helped a friend move out of there - she could see this very coming where she lived - on 7/11/ 2005 - the day of the London bombings - let's say my visits into London afterwards were less frequent for both reasons.

Folks, understand if an ordinary, native Brit defends themselves - be it with fists, legs, weapons of any kind - improvised or not - the UK police will use the unlimited public funds they have access to, to prosecute, fine and imprison you.

If PC Plod and his friends do this, they get merit points.

@Chris of the family Masters - guess who has the black market guns (and the knives and other weapons)?

...and if they use them on anyone, they get the full backing of the state for their defense...at the expense of the taxpayer.

This fellow thought his knife was the Cutting Edge. Moral, don't bring a knife to a Street Fighter.. 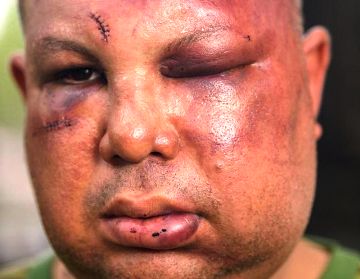 Just to show that there were no Hard Feelings - he was dropped off near the EMC.

Yet more enrichment in London!!!

But I thought knives were banned Less Prone favorited King Of Cups's blog post SCAM ALERT: A Swiss Doctor on Covid-19 and HenryMakow,com: Coronavirus is a Fraud
1 hour ago