Tobacco’s genus, Nicotiana, covers over 70 species. The name tobacco usually refers to most famous and widely used Nicotiana Tabacum and its shorter but more potent cousin Nicotiana Rustica, both native to the Americas.

Although it’s hard to pinpoint when and where it was first cultivated, it is sure tobacco has been used for several thousand years before the time Christopher Columbus reached Americas in 1492, and after that it spread to the whole world.

Although in present-day society associated with a myriad of health issues, including cancer and cardiovascular diseases, this plant has been used for medicinal, as well as ritual purposes for millennia. Only in the last decades tobacco has been aggressively proclaimed harmful. Up until the ‘50s they even had doctors promoting them. Why it is so?

Throughout South and North America, tobacco was used consumed in a diversity of ways: it was chewed, sniffed, smoked, eaten, juiced, smeared over bodies, and used in eye drops and enemas. Its use varied depending on the culture and location – it ranged from medicinal as a remedy for many ailments, to purely recreational consumed by both men and women, and also mystical – a connection to the spiritual world: it´s purifying smoke was blown over fields before planting, over women prior to sex, blown into warriors’ faces before battle, it was offered to gods as well as accepted as their gift. In other words, tobacco smoke was believed to carry blessings, protection and most of all purification.

The popularity of tobacco was likely due to its dual nature: small amounts of tobacco produce a mild stimulating effect on the user, while large amounts can cause hallucinations, deep trance or even death. This is why it plays a major role in many shamanistic traditions, and is an integral part of many of their cultures.

Even today it is widely used by shamans in the Amazon, where shamans who specialize in ceremonies with tobacco are called tabaqueros. They master the spirit of tobacco and heal illnesses with his/her blow of tobacco. There tobacco is considered a Planta Maestra, i.e. Teacher Plant. These plants are considered key protective spirits, allies and guides to the world of health and healing. Other examples of Teacher Plants are Ayahuasca, San Pedro and Coca, but there are dozen others, not necessarily hallucinogenic.

In pre-Columbian North America, different tribes and civilizations had used tobacco, with one thing in common – they all preferred pipes for smoking. The pipes were utilized for distinct social and ritual purposes, which resulted in their sacred status, same as tobacco itself had. Various tribes used tobacco for various purposes including healing ailments such as earaches, snake bites, cuts and burns, respiratory diseases, fever, convulsions, nervous ailments, urinary ailments, and skin diseases. Other examples of its use was sealing the peace with other tribes, preventing lightning and storms, communicating with spirits and, making an offering to them.

Thank you Tara. I will share it on facebook...Have a nice day!

You're welcome Meriem! Like with anything in life, moderation is the key. I really don't smoke much. I usually just smoke a half of a cigarette at a time. And I've been staying away from any pre-rolled commercial cigs. They're full of poison which is the cause of most illnesses/disease due to smoking IMO.

Hmmm... I wonder why they have suppressed the healing and health benefits of tobacco? It sounds similar to how they've tried to demonize marijuana through the years when the reality is it truly has been a miracle drug for so many. It's benefits are endless. 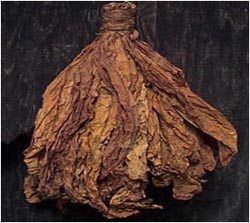 Very interesting!!!  I recall as a child when I'd be stung by a bee or wasp, my great grandmother would chew a plug of tobacco and put it over the sting. She said it would draw out the poison. I believe she was right.  Thanks Tara, sharing this.

"Thanks cheeki. We need more like the Wallace today to stand and fight. And no he was not the height…"
3 hours ago

steve commented on Doc Vega's blog post My First High School Band Song and How the Original Artists Sunk Themselves.
"Here it is ,shown is the same clear gold vinyl 45 I still have nearly 45 years…"
4 hours ago