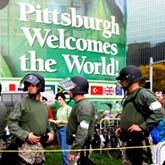 This group will be a resource on the activities inside and outside the meeting.

SCROLL DOWN FOR ARTICLES
IN DISCUSSION FORUM AND
COMMENT SECTION

The One World Globalist crowd will be meeting in Pittsburgh.

This group will be a resource on the activities inside and outside
the meeting.

The article below gives us a look at the martial law declaration made by the city for the NWO leadership. 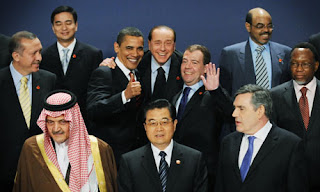 In a disturbing trend that has been emerging in the United States over the last few years, active-duty military will be on a mission in the streets of another modern American city. WPXI News is reporting that 2,000 combat-ready troops from the 2nd Brigade Combat team of the Army National Guard will be deployed in Pittsburgh Pennsylvania during the G20 Summit. The troops will be tasked with providing assistance with crowd control, traffic, defensive terrorist tactics, and equipment to sense biological and chemical weapons.

In an August 3rd broadcast on KDKA News, it was reported that Gov. Ed Rendell had promised 1,500 Pennsylvania National Guard troops who would be on-call “If necessary.” In this and other news reports, it was reported that the roughly 900-member Pittsburgh Police Force was not enough to handle the amount of protestors that are being expected, which was cited as a reason to bring in the National Guard. Pittsburgh Police Department Chief Nate Harper put out a call to other departments and major cities seeking and eventually getting roughly 3,100 out-of-town police officers for the event. So, even though the police were able to secure the needed forces, we now have a confirmed commitment of active-duty military of not 1,500 troops— but 2,000! As of now we can expect 6,000 or more “authorities” for this elitists’ confab.

There is still no word as to whether or not these National Guard troops will be armed, and if so, whether they will be armed with lethal or non-lethal weapons. From earlier reports it is known that the police force will have “Standard-issue riot gear” but it is not known if the military will be equipped in this way too. Another point that is not known at this time is what the chain of command will be. (I.e. whether the police will be directing the military or vice-versa)

Following the U.S. Department of Homeland Security’s designation of the summit as a “National Security Special Event,” the U.S. Secret Service has taken charge of the event. This means that the Federal Government is directing all of the activities of the police, military, local officials, and by fiat— all of the local citizens. Amtrak has announced that they will not be making stops in Pittsburgh during the summit as well as Greyhound, who is considering temporarily moving their terminal to McKeesport. The Port Authority of Allegheny County announced that the light-rail service into the city will stop as it enters the city and admit that they still don’t know about how bus service will be affected.


KDKA News is also reporting that residents of the Downtown Pittsburgh area will need to show ID to enter their homes. The assorted apartment firms in the area are notifying their tenants that their information will be given to the city, which in-turn will put their names into a database. When the tenants who live in the “security zone” want to get home, they will need to go through a security checkpoint and show proper identification. No word on who will man these checkpoints or whether the residents will have to take their belts and shoes off.

Many groups have applied for permits with the city for protests. Many permits have been denied, and many more have not yet been answered. Of the permits that have been granted, none have actually been issued yet. The ACLU plans on suing the City of Pittsburgh if the permits are not issued by the close of the business day, Friday. All of the groups who plan on protesting can look forward to doing so in one of the two proposed “Free-speech zones.”

With active-duty military personnel being on the streets, free-speech zones, little or no public transportation and making local residents show ID to get to their homes, we will be under a de facto martial law declaration here in Pittsburgh. This summit underlines all of the things that are totally un-American and wholly totalitarian in this country today.

"IS AMERICA GOING TO BE THE LAST MAN STANDING ?"

Democracy Denied, While Criminality Applauded, The Crackdown on Pittsburgh

G20 riots in Pittsburgh – How I organized them via Twitter

VIDEO: G-20 Activists Blast Police Response - calling it a "military-style occupation" that resulted in the gassing + arrest of dozens of bystanders, including students + journalists

You need to be a member of Eye On Pittsburgh G-20 Summit Meeting to add comments!

There is ZERO point in gathering hundreds of people together to meet the riot geared militarized police head on.  That is just plain stupid.  Has nobody read Sun Tsu?

The primary advantage of skirmish troops is LOST when you engage the enemy head on.  Activism should take the form of dozens upon dozens of SMALL groups spread out ALL OVER engaging in ONE ON ONE conversations with the public, showing documentaries and waking up and informing people.  Going up against psycho cops is just plain stupid.  Force them to look like idiots by organizing massive armed police in riot gear going up against NOBODY.  They would look pretty darn ridiculous massing HUNDREDS of cops and military against NOBODY.


I GOT THIS VIDEO FROM THIS ORGANIZATION AND SO I’M POSTING IT ON MY BLOG AS IS..

I WOULD APPRECIATE YOUR COMMENTS ON THIS MATTER.

IF YOU AGREE WITH THIS VIDEO THEN PASS IT ON..

IS THIS WHAT WE NEED TO TAKE BACK OUR COUNTRY FROM THESE LEFT-WING COMMIES????

Oath Keepers is a non-partisan association of currently serving military, veterans, and peace officers who will fulfill the oath we swore to support and defend the Constitution against all enemies, foreign and domestic, so help us God.

Our oath is to the Constitution, not to the President, and we will not obey unconstitutional (and thus illegal) and immoral orders, such as orders to disarm the American people or to place them under martial law and deprive them of their ancient right to jury trial. We Oath Keepers have drawn a line in the sand. We will not just follow orders."

Our motto is NOT on our watch!

Comment by Prof. F. V. Pennese on October 11, 2009 at 2:56am
A Message to Al Qaeda from TNM President Daniel Miller: He is requesting we post it anywhere we can


PLEASE PASS THIS ON TO ALL YOUR FRIENDS, WEBSITES, BLOGS ETC.. THIS MESSAGE FROM OUR FRIEND DANIEL MILLER, PRESIDENT OF THE TEXAS NATIONAL MILITIA IS IMPORTANT TO SHOW THOSE PUNKS OF AL QAEDA THAT WE WON’T TAKE SHIT FROM THEM........

A Message to Al Qaeda from TNM President Daniel Miller

Comment by Prof. F. V. Pennese on October 11, 2009 at 2:54am
ONCE AGAIN 99.9% OF THOSE BRAIN DEAD, MORONS IN NORWAY HAVE DONE IT AGAIN..
ONCE AGAIN NORWAY HAS SHOWN WHAT A BUNCH OF BRAIN DEAD, MORONS, PIN-HEADS THAT COUNTRY IS MADE OF. THEY GIVE A NOBEL PRIZE FOR PEACE TO A LEFT WING, BLACK, MUSLIM, BY THE NAME OF HUSSEIN OBAMA BARACK, PRESIDENT OF U.S.A. IN POWER FOR LESS THEN 9 MONTHS AND THEY DECIDED TO GIVE HIM THE AWARD IN FEBRUARY ONLY AFTER 2 WEEKS HE TOOK OFFICE.. SO NOW WE CAN AD HIM WITH THE OTHER BRAIN DEAD: LIKE AL GORE, JIMMY CARTER THE WORST PRESIDENT WE HAD. KOFI AMMAN WITH ALL THE SCUM OF THE U.N. THAT COMES WITH HIM.. NORWAY WAS, IS AND WILL ALWAYS BE A COUNTRY MADE UP OF 99.9% OF BRAIN DEAD, MORONS, PIN-HEADS, POLITICIANS AND POPULATION.. ONCE AGAIN THEY FORGOT WHO SAVED THERE ASSES IN WORLD WAR II.. WHAT MORE NEED I SAY, WHY NOT GIVE THE PRIZE TO: OSAMA BIN LADEN, HUGO CHAVEZ, FIDEL CASTRO, KIM JONG ILL, MAHMOUD AHMADI NEJAD, MUAMMAR GADDAFI AND THE LIST CAN GO ON FOR AGES…. 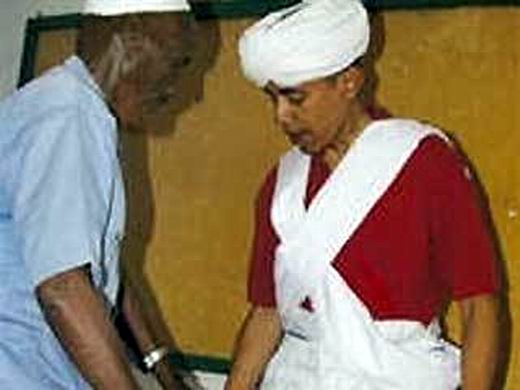 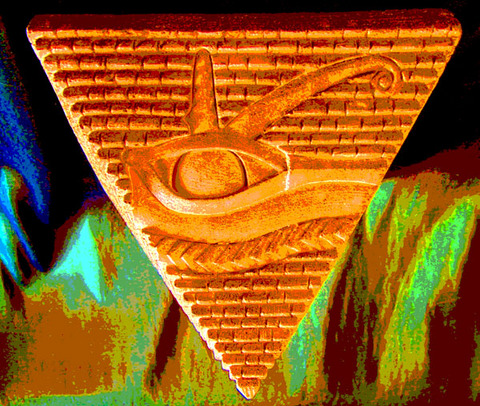 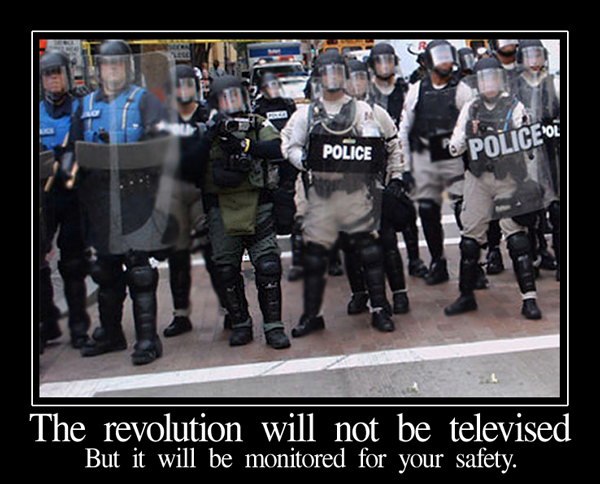 thanks AgentOgden, for the photos.

Comment by agentOgden on September 28, 2009 at 10:27pm
links abound. GREAT WORK HERE btw, from start to finish. This page is probably the best collection of G20 content on the web... definitely the best that I have found. I'm proud to be a part of it.

Comment by agentOgden on September 28, 2009 at 10:14pm
Sure thing James, I'll add some links right now! I should have already.

Here's our video, thanks to Gio for risking his ass.

King Of Cups commented on King Of Cups's blog post The Satanic and Masonic Unholy Church of Darwinism and Neo-Darwinism. Brought to you by the Illuminati controlled Royal Society
"The Theory of Evolution and the Big Bang Theory are nothing more than early examples of…"
6 hours ago

King Of Cups commented on King Of Cups's blog post LGBT Movement: One of Cultural Marxism's Trojan Horses
""Leaderless resistance" reminds me of the failed "Occupy Movement" designed to…"
6 hours ago

James Roberts replied to stormtruther's discussion Are They Burning Dead Bodies In Wuhan, China To Hide The Inadvertent Release Of A Mortal Nerve Toxin? ( I vote plausible)
"I don't see how a nerve toxin could be responsible. Yeah, a tiny amount of Sarin can kill a…"
8 hours ago

James Roberts favorited stormtruther's discussion Are They Burning Dead Bodies In Wuhan, China To Hide The Inadvertent Release Of A Mortal Nerve Toxin? ( I vote plausible)
8 hours ago

James Roberts commented on steve's blog post WARNING WARNING WARNING Making a transwahhhhhman
"When I was still with my ex, who worked in surgery, we watched the Faces of Death and Traces of…"
8 hours ago