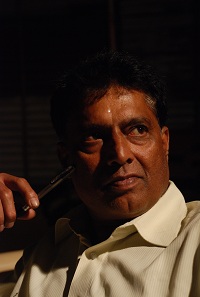 Emergency need to build the ‘Recession-free & Tension-free Zone’ without depending on the money market and the government!

The constitution of the Universe may be put in first place among all the natural things that can be known”. - Galileo - ﻿Dear friends, please note my version on economics and discuss this matter…Continue

Chandrakanth Natekar has not received any gifts yet

Give Chandrakanth Natekar a Gift

Please indicate why you want to join 12160? (N.B - Your application will be automatically rejected if you answer with less than 12 words and / or provide a noncoherent answer)
I read The article 'Vatican Smiles on Karl Marx' on your website and so thought to join!

Would you be willing to donate a few hours or a few dollars to 12160 site projects each week?
Indeed, i myself living without money!

One of my spiritual friends, Swami Sai Sambath wrote author's bio and foreword to my book NUCLEUS OF THE ABSOLUTE as below. It will give you general picture about me:

Nucleus of the Absolute is the outcome of a forty-year quest to unravel the marvels of nature through keen observation and reflection. Most significant foundation of that quest has been an unflinching faith that "nature unfailingly guides the seekers of truth". Second significant conviction that has guided the exploration has been that "the space-time motion governs the advent of the ideas and their influence".

Chandrakanth Natekar from India has been relentlessly pursuing to fulfill his role as an experimenter for four decades. It has been an evolutionary process of transition and transformation. During his adolescence and early youth, included periods of counter dependence and identity crystallization, Natekar voyaged through an intense period of social concern and engagement in the social movement. It was period of action and refection in camaraderie.

As his social concern was replaced first by global concern and then by universal concern his journey became lonesome. In the soliloquy and his austere engagement with the self most comrades parted. Some remained silent witnesses. The avowed atheist was shaken by a series of spiritual experiences unleashed by nature. An unswerving commitment to be non-conclusive and an unfaltering faith in the ways and means of nature helped him from becoming reactive and stagnant, going astray, or getting fragmented. As the experimenter weathered the storm that shook the roots of the previously held beliefs and worldviews, the nature began releasing the radiant beams of unification and integration.

In his journey he has broken the conventional molds of an atheist, rationalist, spiritualist and that of the orthodox science. He has resisted temptations to become a "religious Guru" and has declined invitations to form a cult of his own and the like. Conforming to such molds would have assured him position of enormous power, prestige and affluence. He has declined the lure from both the material and spiritual and has chosen to lead a life of penury in the service of the universal impulse.

Initially the ideas of unification and integration that dawned on him spanned the expanse of the religious, the scientific, the social, the economic and the spiritual domains of human endeavor. Almost concurrently he realized the continuing link amongst the salient inventions and revelations of humankind since the era of Sage Vyasa and Lord Krishna.

This realization of spatial unity and temporal continuity led the experimenter further to delve into the present state of the space-time and its future movements. The result has been a gift from the nature to the humanity: Nucleus of the Absolute.

NUCLEUS OF THE ABSOLUTE is a compassionate offering of nature, gifted through the author, to prepare us for the impending turmoil of transition and transformation. When we approach this book with sincerity and openness, it offer the requisite vigor to the reader to liberate his/her creative faculties from the age-old hegemony of organized religions, dogmas of selfishness, euro-centric and capital-centric economics, and aristocratic and elitist power-knowledge continuum. It paves the way from the stressful world of human stratification to the tranquil world of natural abundance.

Your Gods Are Dividing You - JKOnline Daily Quotes

Quote from  J. Krishnamurti, The Book of Life

What is happening in the world? You have a Christian God, Hindu Gods, Mohammedans with their particular…

Thai is why Jesus has forced to declare the eternal warning to his own believers as below:

"Not everyone who calls me 'Lord, Lord' will enter the kingdom of heaven, but only those who do what my Father in heaven wants them do. When Judgment Day comes many will say to me, 'Lord, Lord! In your name we spoke God's message; by your name we drove out many demons and performed many miracles!' Then I will say to them, ‘I never knew you. Get away from me, you wicked…

Lord Enlil said…
Hi my friend...you did not say nothing..

Everything of what you see build hire on Earth it is the product of us...

I told you ..Earth it is not for people right now...people are just the slaves...

Enki remade you for his needs..he change your D.N.A structure...to serve him and his needs...to venerate him like a God...and it is not a God...

The God it is Only One..

My brother want this Earth only for himself...

Read the Veda...read the Book of Enoch...read what you can...and see the truth...

Anunnaki ,Brotherhood,Watchers...it is all there...

You all never been your masters...not ever...not a single time...

You all call us the E.T. ....but in fact we are now your bigger brothers...but we did not treat you all as such...

Are many factions...some want to help..some prefer to study you all...some want to make you slaves forever...and want a new breeding program...to change again your D.N.A structure ....to become something you are not...

Some see to much pain on Earth and decide to help the humans...

You all was keep far from the Truth and knowledge...because that it is not for you to know.....you are manipulated in a way you all do not see it...

You pretend you know all things...but in fact you know just a little faction of it...

To man it is forbidden to know the Truth ...and have "forbidden knowledge"...only to the chosen ones gates open for them...remember that...

And they prepare a full scale invasion...but they are already hire...from a long time.. but they need a new false flag operation like 9/11...to make war with us..to legitimate that war..

They will do it..and blame us to do it...great....and i think i said i can avoid this war..but seem to me they do not understand...very bad indeed..and they have the support of the bad boys E.T......

Remember US Congress HR 8791...it is real...it is your extermination taking place hire..

PS: Only Illuminati dictate in absolute...all tings are relative...and all things can be change..

I believe in the capacity of humans to redeem them self ..and became free...and have the freedom you all want...

NoTyme2Die said…
Enjoyed reviewing your profile.  Thank you for the invite.

"Claim disputed by who, exactly?"
10 hours ago