Alex welcomes forecaster, author, and CEO of The Trends Research Institute, Gerald Celente back to the show.
http://www.thealexjonesshow.com/articles/2009/january/012809-celente.html

News Links - Submited by readers of the site

Container Facility To Shut Down - 95…
Continue

Over a 1000 people visited this site yesterday

And over 21 Thousand individual visit this month already !!

This brings the total visits to 57 Thousand for the site
since August. The UN has said at least 50,000 Gazans are now homeless

The UN's humanitarian chief has told the BBC the situation in Gaza after a three-week Israeli offensive against Hamas was worse than he anticipated.

Sir John Holmes, who visited Gaza on Thursday, said he was shocked by "the systematic nature of the destruction".

Sky joins BBC in Gaza appeal veto Adrian Wells: 'We don't want to become the story' Sky has joined the BBC in deciding not to broadcast a charity appeal for Gaza, despite mounting poli…

Alex welcomes back to the show Russell Blaylock, M.D., a retired neurosurgeon, and author of Excitotoxins: The Taste That Kills and The Blaylock Wellness Report. Dr. Blaylock has demonstrated the link between food additives and degenerative diseases.…

Ok, so you have probably heard the great news about the Tax Issue reprint, but that is only part of the offensive. http://www.republicmagazines.com

The second part is knowing how to handle the IRS and its infamous intimidation techniques. What will you do when they come knocking on your door? 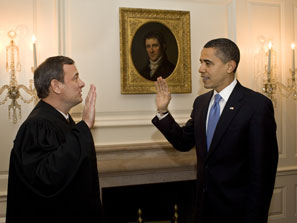 Video of the flubbed oath on inauguration day:…

President Obama’s Rise Due to “Blue Blood” Ancestry or power of American Dream?

As of noon EST today, January 20, 2009, Barack Hussein Obama II is the forty-fourth President of the United States.

The corporate-owned mainstream media would have us believe that Obama’s ascension to power is an “All-American” story attainable by any hard-working “common” American.…

Israeli Foreign Minister Smacked Around At The National Press Club