A HIT squad that killed a top Hamas commander in his Dubai hotel room injected him with a drug that induced a heart attack, photographed all the documents in his briefcase and left a “do not disturb” sign on the door.

The body of Mahmoud al-Mabhouh, 50, was discovered by staff at the luxury Al Bustan Rotana hotel after lunch on January 20. There were no suspicious signs and local doctors diagnosed a heart attack.

Thousands in Tokyo Protest Against US Troops in Japan

Inquiring minds are noting increasing resentment against US militarism in places some might least expect. Please consider Thousands protest in Tokyo against U.S. military presence in Japan

Thousands of protesters from across Japan marched today in Tokyo to protest against U.S. military presence on Okinawa, while a Cabinet minister said she would fight to get rid of a marine base Washington considers crucial. 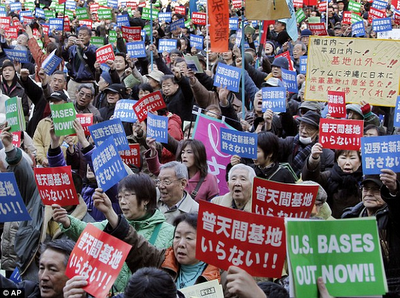 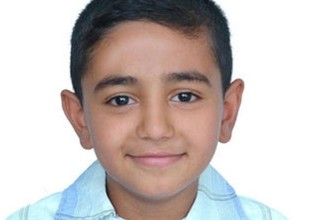 The Nation / By Jeremy Scahill

Nine-year-old Ali Kinani died from a gunshot wound to the head in the Nisour Square massacre. His father may be the one man standing between Blackwater and total impunity.

Every detail of September 16, 2007, is burned in Mohammed Kinani's memory. Shortly after 9 am he was preparing to leave his house for work at his family's auto parts business in Baghdad when he got a call from his sister,… Continue

Taxpayers pay $101,000 for Pelosi's in-flight 'food, booze', Speaker's trips 'are more about partying than anything else'

A curious op-ed "The Tel Aviv Cluster" by the reliably neoconnish David Brooks appeared in the New York Times on January 12th. Brooks enthused over the prowess of Israel’s high tech businesses, attributing their success in large part to Jewish exceptionalism and genius, which must have provided the ultimate feel good moment for Brooks, who is himself Jewish. That Israel has a booming technology sector is undeniably true, but Brooks failed to mention other… Continue

Obama's answer for America: more of me

There's a story of an exhausted tenor at La Scala who, facing repeated cries of "Encore," responded that he couldn't go on. A man rose in the audience to say, "You'll keep singing until you get it right."

That seems to be the defining principle of the Obama administration -- whose response to every problem, every setback, every hiccup and challenge has been, simply, "more Obama."

Indeed, for people who aren't sticklers for political jargon, it… Continue

The Washington Post's Dana Priest today reports that "U.S. military teams and intelligence agencies are deeply involved in secret joint operations with Yemeni troops who in the past six weeks have killed scores of people." That's no surprise, of course, as Yemen is now another predominantly Muslim country (along with Somalia and Pakistan) in which our military is secretly involved to some unknown degree in combat operations without any declaration of war, without… Continue

Democracy in America Is a Useful Fiction

Corporate forces, long before the Supreme Court’s decision in Citizens United v. Federal Election Commission, carried out a coup d’état in slow motion. The coup is over. We lost. The ruling is one more judicial effort to streamline mechanisms for corporate control. It exposes the myth of a functioning democracy and the triumph of corporate power. But it does not significantly alter the political landscape. The corporate state is firmly cemented in… Continue

President Obama's response to the tragedy in Haiti has been robust in military deployment and puny in what the Haitians need most: food; first responders and their specialized equipment; doctors and medical facilities and equipment; and engineers, heavy equipment, and heavy movers. Sadly, President Obama is dispatching Presidents Bush and Clinton, and thousands of Marines and U.S. soldiers. By contrast, Cuba has over 400 doctors on the ground and is sending in… Continue

"Your social networking chit-chat could have an impact on your credit - specifically on whether banks think you are worthy of a loan.

42 Arrested at U.S. Capitol in Day of Action to Denounce Obama’s Broken Promises on Guantanamo 42 Arrested at U.S. Capitol in Day of Action to Denounce Obama’s Broken Promises on Guantanamo, America’s Broken Laws, and the Breaking of Lives by Torture

How I fought to survive Guantánamo

For nearly six years, British resident Omar Deghayes was imprisoned in Guantánamo and subjected to such brutal torture that he lost the sight in one eye. But far from being broken, he fought back to retain his dignity and his sanity. 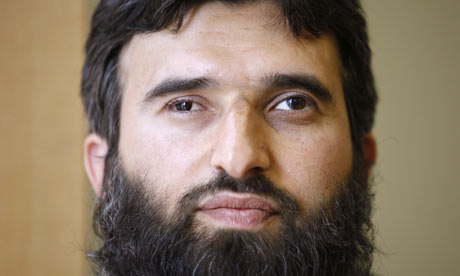 The Obama administration has taken extraordinary measures to prevent desperate Haitians from entering the US since a January 12 earthquake devastated the Caribbean nation, killing an estimated 200,000, making at least 1.5 million homeless, and orphaning 1 million children. The effort to bar Haitians from entering the US—including the wounded seeking medical treatment—illustrates that the priority of the US-led intervention is not to save lives, but to establish military… Continue

The former American military chief of the notorious Abu Ghraib prison in Iraq reiterates the Israeli involvement in the US-run facility, where hundreds of Iraqi suspects were tortured and sexually abused by US soldiers and interrogators.

Shedding further light on the scandal that has served as a controversy-magnet for Washington ever since its emergence in 2004, the retired US army colonel Janis Karpinski says that Israeli agents were recruited by the US military at Abu Ghraib to… Continue

US Mercenaries Set Sights on Haiti

The story for which The BRAD BLOG was awarded a 2010 Project Censored award for "Excellence in Investigative Journalism" is "censored" no more. From the February 2010 issue of Maxim hitting mag racks this week... 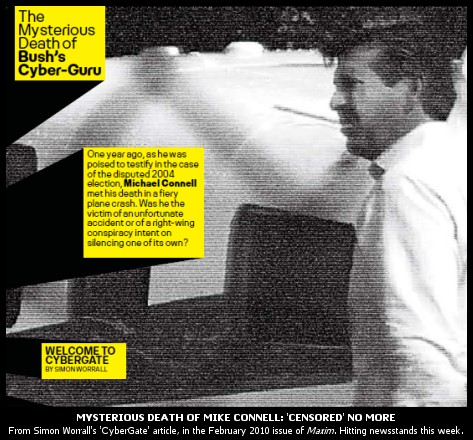 The February 2010 issue hits newsstands this week, and should be available on the Internet soon, featuring a detailed investigative feature on the mysterious death of Mike Connell, the George W. Bush/Karl Rove/GOP "IT Guru"… Continue

Twitter joke led to Terror Act arrest and airport life ban, Man bailed but suspended by his employer after ordeal by interrogation

By Mark Hughes and Jason Walsh

When heavy snowfall threatened to scupper Paul Chambers's travel plans, he decided to vent his frustrations on Twitter by tapping out a comment to amuse his friends. "Robin Hood airport is closed," he wrote. "You've got a week and a bit to get your shit together, otherwise I'm blowing the airport sky high!!"


Unfortunately for Mr Chambers, the police didn't see the funny side. A week after posting the message on the social networking… Continue

Who Killed Massoud Ali Mohammadi?-and why?

Imagine the following scenario: The chief executive of a foreign country decides to conduct terrorist operations inside U.S. territory, and signs a “presidential finding” to that effect. Furthermore, that “finding” authorizes the foreign government’s agents to engage in “defensive lethal action,” i.e. assassinations. And what if, shortly after this information has been leaked to the public, prominent US government officials and even a nuclear scientist or two are… Continue

Left and Right Against the Empire

When President Obama made his first post-election visit to San Francisco, two groups of protesters met him in Union Square. About 500 activists (the “Left”) carried signs, sang songs and chanted for an end to the occupations of Iraq and Afghanistan, for environmental action and Medicare for all.

Sharing space with us were about 250 “tea-baggers” (the “Right”) carrying anti-Obama signs. Their main issues were lower taxes and opposition to “government… Continue

Galloway had been trying to return to Rafah after news broke that seven of the Viva Palestina convoy members were said to be arrested. Police, who at one point were numbered at 25 mainly plain-clothes officers, refused to allow him to return.

Several officers even followed Galloway to the toilet, rest room and a BA… Continue

cheeki kea commented on Chris of the family Masters's blog post Trump Drops Requirement for Employers to Validate Citizenship of Employees
"It'll be the death of the workplace. Employers use to jump through hoops to get overseas staff…"
1 hour ago

"Crazy Bernie got stiffed again now Fudge Packing Pete has got the DNC money behind him!"
1 hour ago

"Here's the remedy. There is a contract between you and a bank to safeguard your money. Under…"
1 hour ago

Doc Vega commented on Doc Vega's blog post Robot Companion Coming To Your Town Soon
"James, okay Buddy I leave it to you Ha!"
4 hours ago

Pete Buttigieg appeared on the national stage out of nowhere during the 2016 election for the DNC chair. Now we're being told he's a front-runner in their pr...
8 hours ago
1 Comment 3 Favorites