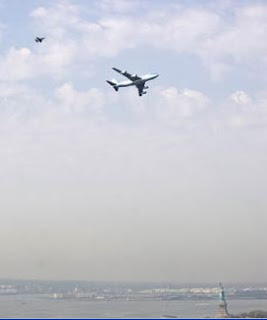 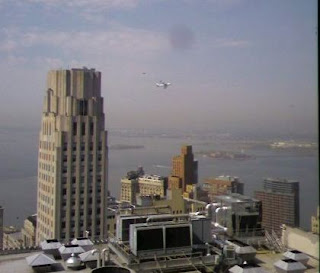 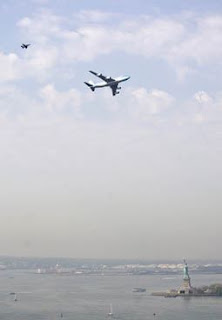 ‘Photo Mission’ Causes Panic, Evacuations and Fears of another 9/11

Some military aircraft flying over lower Manhattan, including a Boeing 747 from the Air Force One fleet, caused a brief scare for residents, workers, and pedestrians on Monday, but CBS station WCBS-TV in New York has learned the jets were part of a Department of Defense photo shoot and that there was no threat to the city.

According to many callers who flooded CBS 2 with their concerns, at about 10 a.m. the aircraft were seen flying at low altitudes over the Statue of Liberty and parts of lower Manhattan. The Federal Aviation Administration confirmed that two F-16s escorting a Boeing 747 -- which WCBS confirmed is also used as an Air Force One -- were part of the Department of Defense photo shoot.

Many residents and workers who saw the aircraft evacuated their buildings as a result, but officials say there is no reason for a panic.

Ellen in Bayonne, N.J. described what she saw to WCBSTV.com: "I saw the jet flying very very low over the Hudson river, it looked like it was going to fly through our office window. Then it banked sharply toward New Jersey. But our building was evacuated because it did this 3 times. A photo shoot should have been communicated to the building in the area. We haven't forgotten 9/11, people were in a panic, lots of rumors, not a good situation."

Most witnesses who called and wrote to WCBS were furious that local authorities hadn't notified anyone about the fly-over. The FAA, however, says they contacted the NYPD, Mayor Michael Bloomberg's Office, New Jersey state police and other local authorities were told ahead of time about the shoot.

However, that they were instructed by the FAA not to publicize information regarding the incident, NYPD officials told WCBS.

Air Force officials say this was a photo mission for their crew. They were shooting from the Statue of Liberty to south of the Holland tunnel, as well as from the Newark Bay to north of the Staten Island Expressway.

Officials say the shoot was part of a normal training mission. They added that they do these mission quite often.


A low-flying airplane escorted by military jets sent worried workers fleeing offices in the New York City area. The FAA said it was a "photo op" conducted by a unit of the Air Force.

NYPD Says It Was Told Not to Disclose Flight Information


The Police Department is referring inquiries about the flight that invoked terror fears in New York this morning to the Federal Aviation Administration, claiming the federal agency directed local authorities not to disclose details about it.

"The flight of a VC-25 aircraft and F-16 fighters this morning was authorized by the FAA for the vicinity of the Statue of Liberty with directives to local authorities not to disclose information about it but to direct any inquiries to the FAA Air Traffic Security Coordinator," read a message sent to the media by the NYPD..

A low-flying plane, closely escorted by two fighter jets, was spotted over Staten Island's North Shore and New York Harbor just before 10 a.m. The plane, which resembled Air Force One, was a "pre-planned" military flight taking photos of the Statue of Liberty and Lower Manhattan, according to the Federal Aviation Administration.

Several buildings in Manhattan's Financial District were evacuated until it could be determined that there was no emergency. Some Staten Islanders were among those who evacuated.

The flight created near-panic conditions on Staten Island and in Manhattan. Many borough residents called the Advance asking if the plane -- which appeared to be a commercial jetliner -- was hijacked. The incident invoked memories of Sept. 11, 2001 when two hijacked commercial airliners flew into the World Trade Center towers.

"It is pre-planned, pre-coordinated with everyone involved," said FAA spokesman Jim Peters, pointing out that city and state officials were notified in advance. "It's a military flight over New York to take photos."

When questioned later the interviewer stated that New York looked Scenic as everthing Rushed By.. Burbia commented on Larry Flinchpaugh's blog post REVEALED: Adam Schiff Connected to Both Companies Named in $7.4 Billion Burisma-US-Ukraine Corruption Case
"Things like this might be the source for TDS."
2 hours ago

cheeki kea left a comment for Mel Cownzowfski
"Greetings Mel, Awesome that you've arrived at this site."
5 hours ago