Bombing The King David Hotel, Jews, Religion and My Thoughts

One of the great Jewish traditions I experienced as a child growing up was the tradition of the value of family. Family comes first and that was apparent. We came together, about 100 of us, every Sunday. My grandmother cooked from sun-up until sundown and between about 7 in the morning and about 7 in the evening every one of my family members would pass through her house, stay for a meal and wonderfully interesting conversation and then go on about their day. Most of my relatives spoke Yiddish and English too but Yiddish was their preferred language amongst themselves.

My mother died when I was 6 so my Dad, valuing family tremendously, would cart me off early in the morning and we'd be the last to leave later in the evening. As a result I was privy to many adult conversations which I would overhear in between playing outside under the chestnut tree or watching TV in my grandmothers bedroom. There wasn't a lot on TV 50 years ago and none of it was propaganda. As a child I understood a great deal of Yiddish but I can't remember a lick today.

Since these events took place 50 years ago and I was just a young child I can only relate my impressions. We weren't proud then of what today we know as Zionism. We were Kazars, from Poland and Romania, we were Eastern European Jews. We certainly weren't proud of the bombing of the King David Hotel by the Irgun, a Jewish terrorist organization. The subject was discussed in hushed tones lest the children overhear it but we overheard anyway.

The King David Hotel bombing was an attack carried out by the militant right-wing Zionist underground organization, the Irgun, on the King David Hotel in Jerusalem on July 22nd, 1946 which is my birthday but of course I wasn't born just yet. The hotel was the site of the central offices of the British Mandatory authorities of Palestine, the Secretariat of the Government of Palestine and Headquarters of the British Forces in Palestine and Transjordan. The attack was the deadliest directed against the British during the Mandate era of 1920-1948. The attack was specifically to drive the British out of Arab lands and it did just that. They tired of the loss of human life. 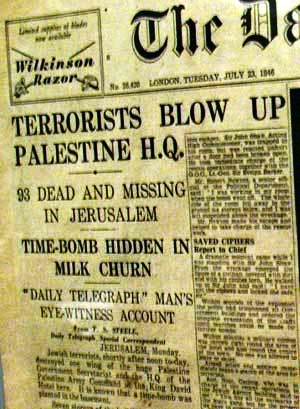 Disguised as Arabs, Irgun terror members planted a bomb in the basement of the main building of the hotel, under the wing which housed the Mandate Secretariat and part of the British military headquarters. Telephoned warnings were sent to the hotel's switchboard, the Palestine Post newspaper and the French consulate. No evacuation was carried out. The ensuing explosion caused the collapse of the western half of the southern wing of the hotel. 91 people were killed and 46 were injured, with some of the deaths and injuries occurring in the road outside the hotel and in adjacent buildings. Controversy has arisen over the timing and adequacy of these warnings and the reasons why the hotel was not evacuated but the fact remains, many people were dead and injured as a result of this terrorist act. 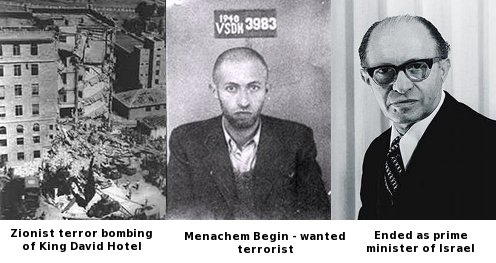 As an Atheist raised in a very strict Jewish family I of course can't help but have a deep affection for Jews and the truth is that some of the most vehement detractors and critics of Zionism are Jews themselves.

More and more people all over the world, and probably many of their governments behind closed doors, are beginning to see the Zionist state of Israel for what it really is – not only the obstacle to peace but a monster apparently beyond control; and they, more and more so-called ordinary folk everywhere, are beginning to turn against it.

This being the case, please use caution and discretion and differentiate between Zionism and Judaism which just like Christianity and the belief in Islam, has every right to exist on this little planet, with every other religion there is and there are many. And if you think of it, while you're out and about shopping for this and that, don't buy anything made in Israel. Perhaps boycotting products made in the country will send a clear message that we're tired, just like the British were, of the loss of invaluable human life.

Comment by Jeff on February 1, 2010 at 8:51pm
Thanks Yahya, I expected you might show up here. Well said and great additional historic information. And yes, oh yes, separating people as individuals from the governments that rule them. Just imagine if humanity were able to visualize that separation, even momentarily, what great things might come of it! We are all very much the same, all of us people, and our governments are all also very much the same in that control of the popular perceptions and acquisition of resources through war are priorities for all of them. Odd that Iran, Cuba, Venezuela and North Korea don't fit that mold.

Comment by Jeff on February 1, 2010 at 3:49pm
I agree. And just as Menachem Begin was eventually accepted into the mainstream from terrorist to Prime Minister, Zionism is being accepted as legitimate methodology as well but will very likely be the eventual downfall of the Jewish state.

Comment by Tara on February 1, 2010 at 2:23pm
Thanks for sharing Jeff! Yes, I too believe that it is very important to distinguish between Zionism and Judaism and realize that by attacking a religion based on misunderstanding, one is perpetuating division and those that rely on divide and conquer to control ultimately win. And besides, we don't always have to agree on our belief's but we should always respect each others right to those belief's. All religions have a place on this revolving sphere of complexities.

Zionism has nothing to do with religion. It is a political movement that is based on hatred, racism, brutality, deception, division, arrogance and moreover is a scourge on humanity. It in no way has anything to do with Judaism.

Boycotting Israel is a start Jeff, definetely a start.

"I wish you wuz my neighbor. Salute to who ever this farmer is,this just makes my mouth water. Here…"
3 hours ago

Guardian of Scotland commented on Phyllis Maka's blog post Jim Stone - STOP EATING PORK RIGHT NOW, AND DON'T EAT IT EVER AGAIN
"If this is true then many people in America will suffer. Many cultures have eaten pork all of their…"
3 hours ago

Central Scrutinizer favorited Doc Vega's blog post Step Back in Time: An Interview with General Flynn by John B. Wells
5 hours ago

STOP EATING PORK RIGHT NOW, AND DON'T EAT IT EVER AGAINInsider info: It is part of the plan to take…See More
6 hours ago
1 Comment 0 Favorites