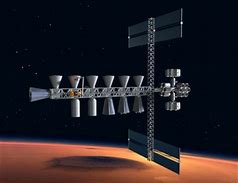 Man has fantasized about landing on Mars and terraforming the Red Planet into another earth for decades. To some uniformed people you would get the impression that Mars would just be another vacation destination, but that’s where science fiction and reality begin to part ways. There are harsh realities and technical limitations that make feasibility a distant prospect even though Werner von Braun at NASA dreamed about it in his day.

For one thing Mars has a very hostile environment. Many people realize little that the Martian atmosphere is the equivalent of Earth’s at 30,000 feet where a person would soon suffocate and their blood would begin to boil in the lack of atmospheric pressure. Since Mars interior core became dormant unlike earth’s hot liquid metallic core that generates a magnetic field that forms a shield that protects Earth from the sun’s radiation, the Martian surface is bombarded by deadly radiation and meteors! Whereas Earth maintains a gravitational companion 1/6 of its size, Phobos, the only moon in the solar system traveling counter clockwise around Mars does not seem to shield the Red Planet too well from meteor strikes.

Dust storms regularly scour the Mars surface at speeds of over 1,300 mph. with tornadoes that can range in length up to 150 miles and further into the upper atmosphere than those that occur on Earth. One Russian scientist proclaimed that the Mars moon, Phobos, must be a hollow, artificial, satellite due to its speed and peculiar retrograde orbit. With no surface water on Mars and only sparse underground sources of it, Mars appears to be a dead planet though some evidence of organic soil organisms may have been detected by NASA’s landed satellites beginning with the Viking series in the 1970’s. Still too far away

Taking a trip to Mars from Earth from a chemically launched rocket with tons of heavy fuel and a human payload would take 7 to 9 months for the crew with untenable limitations on resources to keep life support systems functional for so long. Currently, an Earth spacecraft cannot attain sufficient velocity or be launched from the surface with enough capacity to keep a crew alive for 7 months of travel. The future is promising as scientists begin research on ion propulsion and photon rockets that will not attain meaningful thrust in the atmosphere under gravity but once in the vacuum of space free of gravity a spaceship can attain incredible speeds able to reach Mars from Earth in 30 days to perhaps hours! This technological leap will take years! However, the use of modular robots who can be utilized in a phased array could construct an entire site for human landing and habitation long before a visitation from human astronauts. A boxlike robot propelled by a single tire affixed with a number of power tools or specific instruments could work in tandem with a large number of other similar automatons and literally build a facility fit for human occupation thanks to preprogramming and site selection. With cameras, enough memory, and monitoring from earth the project would be safer, less costly, remotely controlled, and there could be numerous completed projects by the time Earth-men were ready to land from orbit and begin a Martian colony. Still the personnel would need to be shielded from radiation and the threat of meteor strikes would still exist. So, the prospects of a Martian colony would still remain risky unless subsurface existence was attainable.

With temperature deviations of winter weather at 195 degrees below zero to summer temperatures at 70 to a chilly night time freeze to 100 degrees below zero the contrasts would put a strain on materials from the expansion and contraction as well as the energy that would need to be generated for life support. Solar energy panels might power orbiting space stations and satellites, but not the facilities that would need to keep humans alive. Robots were preceded their human Colonists would not need these energy consuming accommodations but that won’t stop them from assembling modular buildings, storage facilities, and inflating a human habitat with sufficient pressurized atmosphere. The building material would correspond to the ability of the robots to interlock parts much like a child’s Lego set would be built. The robots would more resemble box-like vehicles than biped humanoid types.

Estimates for an operation of landed and delivered robotic construction teams using cargo that has been orbited and landed on the Martian soil could be less than 20 years away, but the expense of such an industry would have to be left to private companies who can furnish the capital and generate funds from other operations or private investors. Whereas terraforming, attempting to alter the atmosphere, terrain, and modify a near lifeless planet into a functional biosphere would take much longer to create. The technology for such ambitious accomplishments would be a challenge, but who knows what new discoveries will suddenly push technology much further along. Couple all this with astronomers having to forecast the arrival of asteroids could also be another calculated risk that would make a Martian Colony a costly gamble. 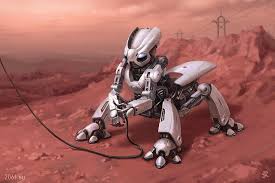 Thanks Raz but the incredible distances would dictate that the robots would have to be individually programmed for autonomy with humans basically monitoring them in the even of problems.

Les, you're right about the time delay because of the huge distances. Yes, these robots would have to be adequately programmed to act on their own. No need to send humans until the robots have erected the facilities. Yes, government would be a problem. It would have to be Constitutional and enforced rather than corporate bylaws that would probably limit people's liberty. I think it would probably be more like a slave existence with everyone simply existing to work in order to maintain the life support of the colony.

While sending robots rather than humans to Mars is a much more viable thing, there are plans for human settlement on Mars, the Mars One Project. There are plenty of volunteers for a one way trip to Mars. So, our rulers want to mess up another planet, this one isn't enough. What's the point really, as we cannot live peacefully here, why spread any further? By the way, remote control of the robots would not work very well considering the distance that varies from 80 million to 380 million kilometers. Radiowaves would take 4 to 20 minutes to get there, and the same time back. The robots could have AI though and work more or less independantly, given siple tasks that could be monitored and controlled with delay.

Less Prone favorited Chris of the family Masters's blog post Crime Is About To Commence.
44 minutes ago

Less Prone favorited Daily Con's discussion “Sidney Powell is registered as a MILITARY LAWYER and is the only one who can prosecute TREASON at a TRIBUNAL!”
5 hours ago