And reader John Marcoux sends these pics from Charleston: 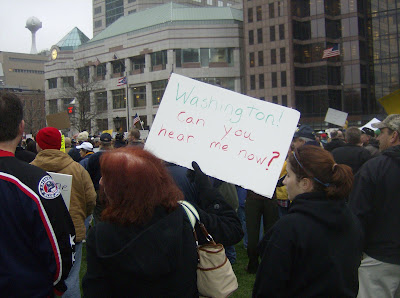 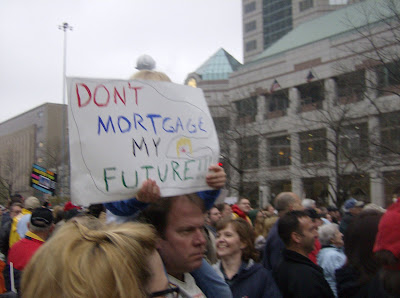 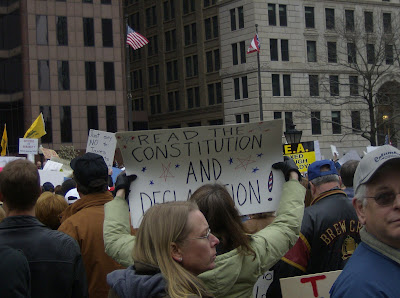 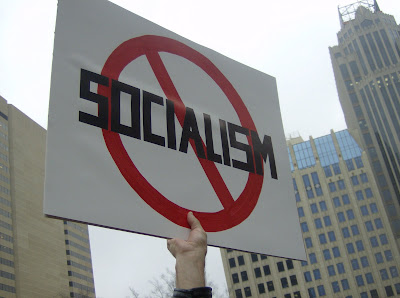 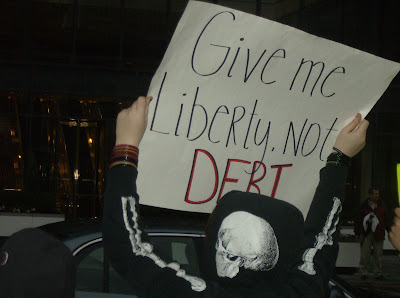 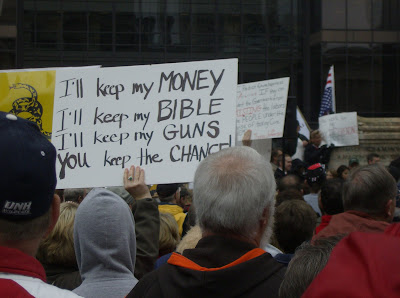 Whipped up by conservative commentators and bloggers, tens of thousands of protesters staged "tea parties" around the country Wednesday to tap into the collective angst stirred up by a bad economy, government spending and bailouts.


The rallies were directed at President Barack Obama's new administration on a symbolic day: the deadline to file income taxes. Protesters even threw what appeared to be a box of tea bags toward the White House, causing a brief lockdown at the compound.

Ohio State student Justin Higgins was one of the organizers of the Statehouse protest. He said spending is something he takes seriously.

"My dad had a pretty solid job until a few months ago," Higgins said. "He's laid off now."

Higgins said his family was watching every dime in their own personal financial crisis, and he said that government should be just as responsible.


"People are fed up and when they see these huge numbers, they know even if we're not paying for increased taxes now, something's going to happen down the road," Higgins said. "We just can't keep building up debt. They're frustrated and they're concerned."

Earlier in the day, protesters took to the street in Marysville.

"Just like the original Boston Tea Party," said Sarah Edwards. "It was just regular Joes out there making a big statement."

Protester Aaron Edwards said the demonstrations were meant to be a statement against big government and big spending.

"We're being taxed too much and the government's spending too much" Aaron Edwards said. "We as a family had to cut back a lot during this recession. Government needs to cut back, too."

Shouts rang out from Kentucky, which just passed tax increases on cigarettes and alcohol, to Salt Lake City, where many in the crowd booed Republican Gov. Jon Huntsman for accepting about $1.5 billion in stimulus money. Even in Alaska, where there is no statewide income tax or sales tax, hundreds of people held signs and chanted "No more spending."


"Frankly, I'm mad as hell," said businessman Doug Burnett at a rally at the Iowa Capitol, where many of the about 1,000 people wore red shirts declaring "revolution is brewing." Burnett added: "This country has been on a spending spree for decades, a spending spree we can't afford."

In Boston, a few hundred protesters gathered on the Boston Common - a short distance from the original Tea Party some dressed in Revolutionary garb and carrying signs that said "Barney Frank, Bernie Madoff: And the Difference Is?" and "D.C.: District of Communism."

Texas Gov. Rick Perry fired up a tea party at Austin City Hall with his stance against the federal government, as some in his U.S. flag-waving audience shouted, "Secede!"

In Atlanta, thousands of people gathered outside the Capitol, where Fox News Channel conservative pundit Sean Hannity was set to broadcast his show Wednesday night. One protester's sign read: "Hey Obama you can keep the change."


Julie Reeves, of Covington, brought her Chihuahua Arnie, who wore a tiny anti-IRS T-shirt. "I want the government to get its hand the hell out of my wallet," Reeves said.

The tea parties were promoted by FreedomWorks, a conservative nonprofit advocacy group based in Washington and led by former Republican House Majority Leader Dick Armey of Texas, who is now a lobbyist.

Organizers said the movement developed organically through online social networking sites such as Facebook and Twitter and through exposure on Fox News.

While FreedomWorks insisted the rallies were nonpartisan, they have been seized on by many prominent Republicans who view them as a promising way for the party to reclaim its momentum.

"All you have to be is a mildly awake Republican candidate for office to get in front of that parade," said Grover Norquist, president of Americans for Tax Reform.

"There is no such thing as so-called free money and that includes stimulus," Sanford told several thousand people outside the statehouse in Columbia, S.C. "Paying down debt is an old American theme and never a bad thing."

There were several small counter-protests, including one that drew about a dozen people at Fountain Square in Cincinnati. A counter-protester held a sign that read, "Where were you when Bush was spending billions a month 'liberating' Iraq?" The anti-tax demonstration there, meanwhile, drew about 4,000 people.


In Lansing, Mich., outside the state Capitol, another 4,000 people waved signs exclaiming "Stop the Fiscal Madness," "Read My Lipstick! No More Bailouts" and "The Pirates Are in D.C." Children held makeshift signs complaining about the rising debt.

More than 1,000 protesters gathered outside a downtown federal building in Salt Lake City despite the rain and snow. Kate Maloney held a cardboard sign that read "Pin the tail on the jacka$$" with a picture of Obama on a Democratic donkey.

Other protesters also took direct aim at Obama. One sign in the crowd in Madison, Wis., compared him to the anti-Christ. At a rally in Montgomery, Ala., where Twisted Sister's "We're Not Gonna Take It" blared from loudspeakers, Jim Adams of Selma carried a sign that showed the president with Hitler-style hair and mustache and said, "Sieg Heil Herr Obama."

Still others talked of their children's futures. In Washington, D.C., Joe Hollinger said he took the day off to attend the protest with his 11-year-old daughter.


"I'm concerned about the incredible amount of debt Congress is going to put on our children," Hollinger said, pointing to his daughter's sign, which read, "Congress get your hand off my piggy bank."

Comment by truth on April 16, 2009 at 1:23am
yea it was a great turn out. Too bad they pointed their anger mostly at the Dems however.

Comment by TheLasersShadow on April 15, 2009 at 10:09pm
Nice good visual report, they really surprised me today with turnout. This was very spontaneous, zero leadership country wide. looks like 5000+ there.

Chris of the family Masters favorited Aaron's blog post The Proof Is In: The Election Was Stolen
3 hours ago

Lockdown – the Dark Side vs. the Right Side of History…See More
4 hours ago
0 Comments 0 Favorites

Larry Flinchpaugh commented on Larry Flinchpaugh's blog post Rates congressmen based on their adherence to constitutional principles
"Almost all Democrats score 25%-35% and below."
7 hours ago

Less Prone commented on Chris of the family Masters's blog post Some Wars Are Not Meant To Be Won
"Related to SV40 Judyth Vary Baker,     Mary Sherman, Mary's Monkey"
15 hours ago