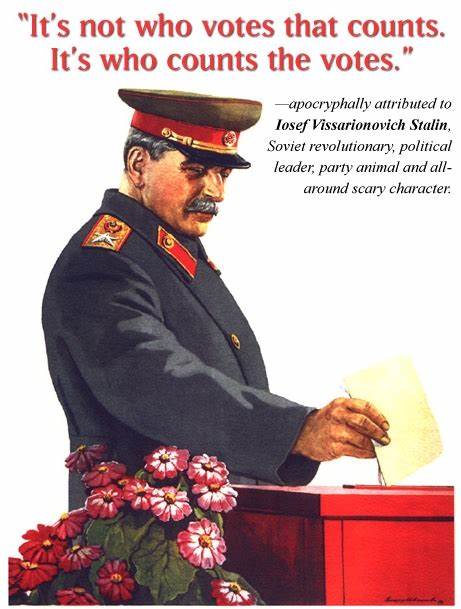 Valerie Jarret set the tone for Democrat policy on voter fraud in 2009 after President Obama took office. The Department of Justice, according to Valerie would not prosecute voter fraud! In just about every state in the Union Democrats attempted to abolish Voter Motor Laws requiring an image of a driver's license or state ID card in order to allow an individual to cast a vote claiming that it was discriminatory and oppressed voter turn out. That has all been proven wrong now. One might recall that it was Valerie Jarret who in 1976 made the statement that she would impose Sharia Law upon America using it's own Constitutional Law to achieve that goal!

In 2016 after President Trump was inaugurated AG Jeff Sessions began an investigation of all state voting systems after evidence of fraud had been detected. He got as far as 11 states before State Attorney Generals began suing the Trump Administration for attempting to investigate. What did that tell you? What did they have to hide? The stage had been set for yet another battle of the false narratives of the Democrats and their all important use of voter fraud to remain in power. These three incidents clearly indicate a pattern of willingness to exploit the voting system in order to win whether it was fair, legal, or not!

Now Project Veritas is once more on the move and has already used hidden cameras to expose Democrat operatives bragging about how many illegal votes they could produce using deceptive techniques! As a result several Democrat election employees have been fired! The evidence is being uncovered and Democrat leadership will do anything to hide it and justify it!

The strategy of Project Veritas uses to bypass the legal barriers of the states refusing to be investigated is for them to analyze census records, actual voter district registered voter numbers, and actual votes tallied. What has been revealed in several states has been many more votes cast than registered voters recorded in numerous districts, fake voter ID's, double votes in more than one state cast, and even foreign non-citizens who have been encouraged in states like Florida and Texas to vote even though it is against state law to cast a vote without proper registration, legal citizenship, and identification prior to election participation!

State by state Project Veritas will conduct their investigations without the obstruction of state officials who obviously don't want the secrets of their illegal practices being revealed! In Ft. Worth, Texas 6 women were charged for influencing the votes of seniors and changing their vote applications! In Florida more voters were caught casting vote in more than one state. In the state of California not only does the local government encourage illegal aliens to aqpply for state drivers licenses but they prohibited from, but also instructed them to cast votes in statewide election that they are not legally qualified to participate in. When did the law ever stop Democrats from circumventing legality!

One University study calculated that more than 5 million votes could have been illegally cast, inelidgible ,duplicated,  or fraudulent in 2016 not to mention 2018! Of course we could count on the US media to support the Democrat agenda and declare these findings as conspiracy theories, the typical strategy of dismissing the exposure of the systemic lies of a party that does nothing for its constituents but remain in power after using rhetoric to attack conservatives, the GOP, and Christians. If it takes campus attacks on conservative speakers, it it takes propaganda in the form of lies, if it takes denial in order to prevent the public from finding out just why the Democrats win elections when the majority of the public does not agree with their destructive policies the radical donors, the DNC, the unseen influences of those like Tom Steyer and George Soros will fund legal defense of those charged, and the injustice will be prolonged!

Arriving at the undisputed truth

In the final analysis not only did Hillary Clinton lose to near record levels of Electoral College votes, but the myth of her winning by 4 million popular votes is also a lie! With Project Veritas investigating deep behind the cover used by the Democrats we are now seeing through the veil of deception that has forced many  a disgruntled citizen to wonder why elections like Proposition 8 were overturned by activist Gay judges or why voter disapproval of Sharia Law being approved in Oklahoma by 70 thoudsand votes is intervened upon by an activist Democrat judge against the will of the people to force a referendum! The truth is gradually being revealed! The Dark Ages of Democrat corrupt governance is finally being exposed for what it is!

Obama a bastard child himself! Thanks Diana!

This kind of crap:

It’s one thing to claim that a man can “identify” as a woman or vice versa. Increasingly we see a…See More
2 hours ago
0 Comments 0 Favorites

Less Prone commented on Chris of the family Masters's blog post The Sport Mad World
"Grown-up men waste their time energy in following games. Otherwise they could direct that it…"
2 hours ago

"The intel types have the names down - Black Rock, Shadow, Abraxas, Black Cube..."
5 hours ago